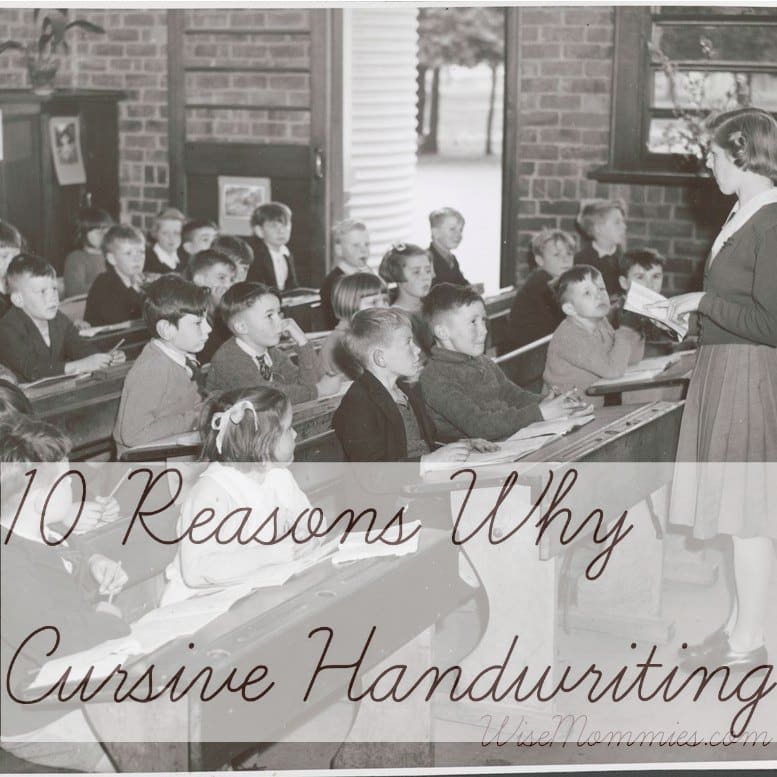 There is an endangered species in American schools that I’m addressing on the blog today. I’m talking about cursive handwriting also known as longhand. Saving the Important Elegance of Cursive, and 10 Reasons Why Cursive Handwriting Remains Relevant.

Cursive handwriting in the 21st century;
why on Earth is it necessary in a world of print?

My son came to my room the other night asking to snuggle in bed with me for his bedtime story. He started reading one of my post entries for my blog and asking questions. I was shocked at how well he was reading and actually comprehending. It was only months ago that he really started to read. I expressed my surprise, and somewhat jokingly told him that I would have to be more cautious with what I leave just laying around for his little now-literate hawk eyes to discover. He smiled widely, the glint of self-confidence and future discovery reflecting in his eyes.

I matched his curiosity exclaiming, “Well don’t get too excited because most of my handwritten notes laying around or calendar notes are in cursive.” I’m thinking, whew, I’ve got a couple of more years to take extra precaution at what his tender eyes will unfold. He then looks up at me and his self-confident smile came back, followed by, “But mom, at our school we learn cursive in 2nd grade, so starting next year, I’ll be able to read anything written by anyone.”

First of all, I love the fact that there are no limitations with the vast resources being offered to my son at his school. Cursive is an art and I love that he is about to learn cursive handwriting. I have my own fond memories of mastering the skill of cursive. I’d love to share my extensive collection of travel journals and all my fun arcane stories and the tediously documented growth development in his baby book with him someday without having to translate my cursively written words.

1) Cursive connects children, adults, all of us to the past:

I can’t imagine walking through a museum with access to some of America’s most important Historical documents within eyesight such as The Emancipation Proclamation, The Bill of Rights, and The Declaration of Independence, but not being able to read them from a lack of ability to read script writing, as if these documents were written in another language other than English.

It’s like many who can speak a second language but can’t read or write that language. How limiting to be able to understand English but have limitations on being able to read it or even write it in the elegance that many others can.

The future is the keyboard, cursive is an ancient skill? Or?

2) Cursive? I don’t even need to handwrite.

Will art classes on block print or learning the cello also become ancient or pulled in the educational school system? After all, we have Photoshop tools galore over the internet with computer access, and you can download all Yo-Yo Ma’s work in the next 30 minutes. With every form of art overridden by technology, we are slowly squelching every creative aspect from the lives of our children and our future society.

Why foster the drive to create art laboriously when art from all present and past corners of humanity are at your fingertips? We create art to say something. We write cursive to write something with a personalization that isn’t said otherwise. Yes, the world has become technologically savvy and independent but limiting your child’s ability to read and write cursive is not building self-dependency but a drive-less dependency on technology.

Cursive is an art form, subtle, day-to-day art form that leavens life, like little origami surprises, arranging flowers… a well-crafted condolence or thinking-of-you letter. If you support longhand teaching you are supporting art, a grace of writing. You also are supporting the hands to be a kind of multilingual.

Different hand muscles and parts of the brain are used for both forms of writing.

* According to Dr. David Sortino, “cursive handwriting stimulates brain synapses and synchronicity between the left and right hemispheres, something absent from printing, typing or keyboarding.”
* Cursive writing has proved to even support higher SAT scores.
* In a University of Chicago study published in Journal Science, researchers found that students could lessen test anxiety while boosting test performance by nearly one grade point by simply writing, for 10 minutes, about their test anxiety.
* Shadmehr and Holcomb of Johns Hopkins University published a study in Science magazine showing that their subjects’ brains actually changed in reaction to physical instruction such as cursive handwriting lessons.
* An article in New York Times by Maria Konnikova, it’s been shown that print vs cursive “activates separate brain networks and engages in more cognitive resources.” She explains how following a brain injury, or in dysgraphia, where the ability to write is impaired or in Alexia, impaired reading ability, individuals who can no longer write or understand print can still comprehend cursive.

5) Helps a child learn to read:

Cursive writing can help children learn to read or become better readers. Cursive helps with directional discipline, how the letters connect creating hand movements that help the spelling process. With cursive, each word is written as one with a nice flowing movement. With simple handwriting, the hand must lift to write each letter; the stop-and-write throws many students off with spelling, writing and reading. The flowing movement of cursive, writing each word as one, creates a unit connectedness, helps many children reinforce phonic and spelling patterns.

Both the BDA (British Dyslexia Association) and the IDA (International Dyslexia Association) advise cursive writing to be taught to kids with dyslexia. Cursive letters are more stylistically distinct and are easier for students struggling with distinguishing similar letters to recognize the difference and empower these children to see words as a whole, not just a part. Cursive is often part of dyslexia therapy but also beneficial to all students.

* Dr. Klemm, a senior professor of Neuroscience at Texas A&M, has written several articles about why “the pen is mightier than the keyboard.”
* Writing in longhand boosts memory by helping the writer retain more information, generate more ideas, promotes critical and creative thinking as well as improving memory retention.
* A study published in Psychological Science, “Longhand note takers engage in more cognitive processing than laptop note takers, selecting more important information to include in their notes, which enables them to study this content more efficiently.”
* PBS Newshour published a report about how cursive helps not just dyslexic students but all students with deeper and more critical thinking, memory, reading and more. According to Marilyn Zecher, a former teacher and language specialist for the PBS report: “If we’re asking children to think about what they are reading, if we are asking to really assimilate the content and make notes and remember it, cursive handwriting really supports that enormously.” “Some of the most recent research in the fMRI studies is showing us that when the hands are involved, it’s a stronger association for learning and memory. When people write things they remember them longer.”

Researchers have stated time and time again that you can’t underestimate the value of those “other” skills—that is, the ones that don’t show up on a formal test. Fine motor skills (especially through handwriting) are definitely included in those skills, as cited in a 2012 study in the journal Child Development. They write, “handwriting supports executive function by engaging a child’s attention and developing her ability to focus.”

9) Benefits from cursive psychologically and other:

* The author of the book, Future Wise, also addresses’ longhand and it’s advantages psychologically.
* There is also an interesting article published in Scientific American, “A Learning Secret: Don’t Take Notes with a Laptop.”
* Personally, I love how longhand helps me to quickly write. Especially as a writer and influencer, I’m constantly in need of quickly writing.

10) Your child could win the Zaner-Bloser National Handwriting Contest!

The National Handwriting Contest is open to all students grades K-8 selected from both public and private school categories. Grades 3-8 submit longhand handwriting entries. There’s even a category, the Nicholas Maxim Award, for special needs students. Every year the contest entries must be submitted by mid-January. The 2017 contest is awarding $500 cash prize and trophies to the top students. Also, each teacher of a Grand National Grade-Level Champion is awarded a trip to the International Literacy Association Conference in Florida. Each school with grade-level winners receives educational materials valued at $1,000.

North Carolina passed a “Back to Basics” law last year which mandated longhand (and multiplication tables) be taught. Forty-five states and the District of Columbia use the Common Core’s English Language Arts standards. But a few states (California, Idaho, Kansas, Massachusetts, North Carolina, South Carolina and Tennessee among them) have recently moved to make cursive mandatory.

And in some communities, cursive camps are beginning. There is a wonderful cursive camp in Dallas, TX. Scofield Christian School has opened up their cursive handwriting camps to the community. Also see a preview of the camp via WFAA channel 8 news, click here. Continue to gift children with the gift of cursive.

Interested in learning more about Scofield Christian School? Call for a tour at any time and use the code “WiseMommies” for a registration discount.

Cursive: Why is it Returning to Texas Schools?