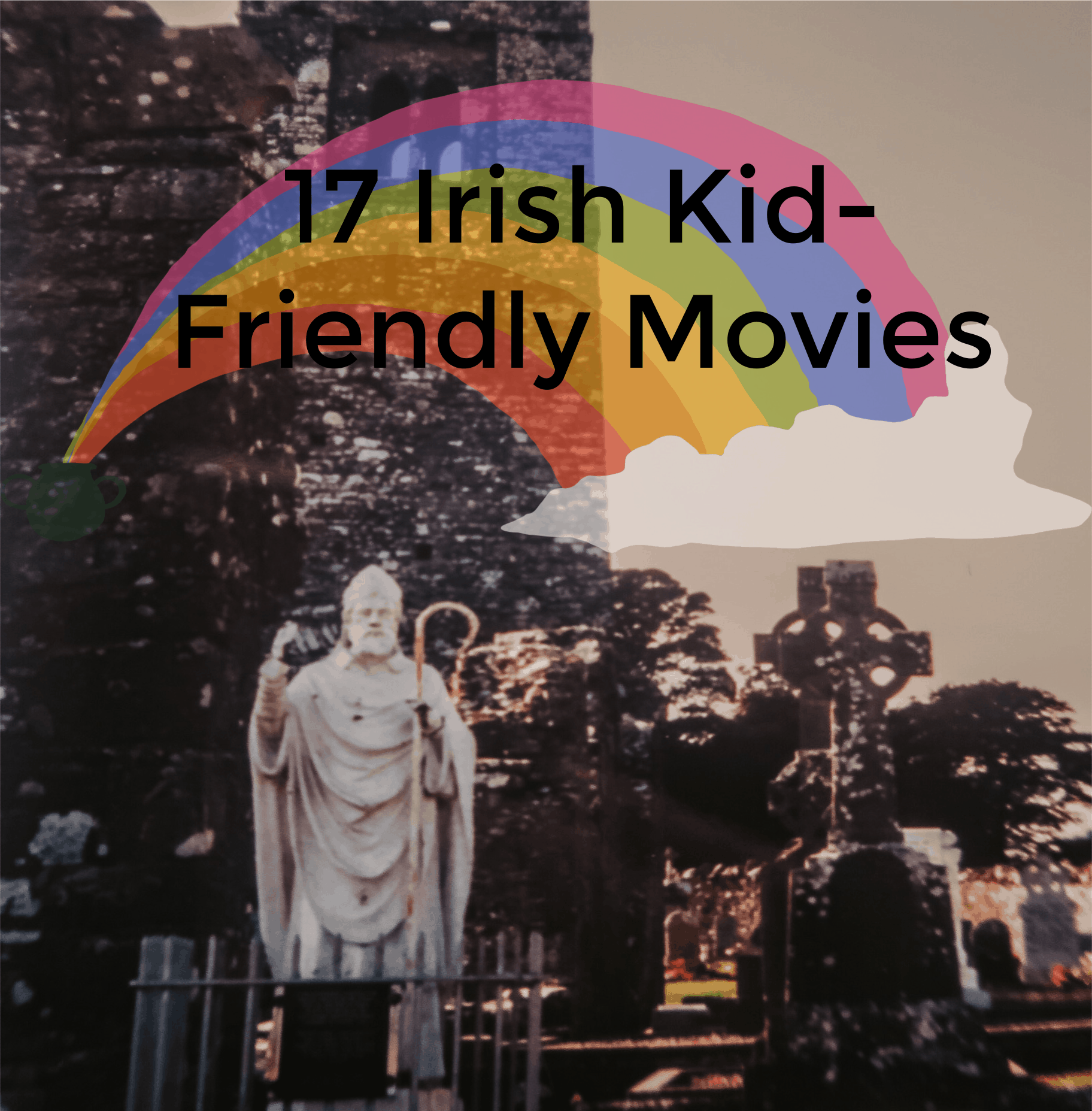 Every year, I get so excited to celebrate the Irish culture on St. Patrick’s Day and for the whole week really. My time living abroad in Ireland forever changed me as a person; “My Biggest Life-Changing Moment.” Now I have fun sharing my memories and teaching my kids about St. Patrick’s Day and the Irish culture. In addition to this post, 17 Kid-Friendly Irish Movies to Watch, click here for a list of the Top 21 Irish Movies to Watch for a family-friendly viewing with older kids and adults.

The Irish love stories about selkies!

#1 Song of the Sea (Rated PG) A sweet little movie about a little boy who discovers his mute sister to be a selkie freeing the faeries in the spirit world. This is a family favorite of ours. We watch this movie every year since my boys were four and seven years old.

#2 The Secret of Roan Inish  (1994) (Rated PG) Filmed in Donegal, Ireland. “Between land and sea, there is a place where myths are real.” It’s a slow movie but with lots of Irish storytelling. In this film, the children do a fantastic job of cleaning and restoring the seaside cottages.

My boys kept pausing the movie to ask questions about the thatch roof, the paint used, the Irish soil, and even pondered about the garden tools used to dig up the soil. I’m not kidding, my three young boys were fascinated with these details of the movie.

When I traveled around Ireland, the Irish were always talking about the soil of the land. My oldest son was so fascinated with their soil and the thatch roof that during the movie he actually proclaimed, “I really want to go to Ireland now.” After all my cool stories of my life in Ireland, and my fun Irish homeschool lessons, games played, pictures of Ireland, and other shenanigans, my son is finally sold on Ireland with thatched roofs and Irish soil Hilarious!!

#3 Ondine (Rated PG-13) Another wonderful selkie movie. It starts off by showing a fisherman discovering a woman, Ondine, in his fishing net. They begin to think she is a selkie who brings them good luck…

This movie is very dramatic with some pretty intense issues revolving around alcoholism, happiness, and redemption. There are a few “risque” moments, an alcoholic fisherman who is caring for his ailing child, and a few other family dramatic storylines. I enjoyed this movie but would say that it’s not for the younger kids.

#4 A Shine of Rainbows  (2009) (Rated PG) Secret caves, a lost baby pup seal, and an orphaned boy who shows his adoptive family how rainbows can shine around and within us all. A sweet and inspiring story.

The Irish are known to be great storytellers:

#5 Into the West (Rated PG) This movie shows a widower living with his two sons in the slums of Dublin (pretty much where I was living in Dublin, no joke!!). The grandfather, who’s an old story-telling Traveller, arrives with Irish folk-tales and legends to share. The movie, beyond travelers and the father/son relationship, really is about Ireland.

#6 Jig (Rated NR) A documentary showing children and young adults who are training for the World Irish Dancing Championships.

#7 Man of Aran (1934) (Rated NR) A documentary, though fictional, with some historically inaccurate parts, it’s still a view into how life on the Aran Islands was in the early 1900 period.

#8 The History of St. Patrick’s Day (2010) (Not Rated, 50 min) How did St. Patrick’s Day, a religious festival, turn into a nationwide celebration of all things Irish? Learn about how towns in Ireland honor the man who brought Christianity to Ireland and how they celebrate with feasts and festivals as well as a look at how Americans and Irish Americans celebrate St. Patrick’s Day in the United States.

#9 Check out the National Geographic’s website, countries Ireland, with your kids.

The Book of Kells

#10 The Secret of Kells, (Rated G, 75 minutes) This movie is based on the story of the origin of the Book of Kells. It also draws upon Celtic mythology. I wasn’t crazy about this movie but my boys really like it. They’ve watched this movie more than once! When I lived in Dublin, Ireland, it was a must to see The Book of Kells which is an illuminated manuscript Gospel book in Latin and contains the four Gospels of the New Testament.

Before viewing The Book of Kells at Trinity College, we watched this short video about the Making of Medieval Manuscripts. Fascinating and educational! My three boys wanted to watch it several times.

#11 Darby O’Gill and the Little People, (1959) (Rated G) From the accents, terminology, leprechauns, pots of gold, Irish jigs, lush countryside, and good-natured blarney it doesn’t get more Irish than this. This movie is old-fashioned, innocent fun, with a love story thrown in the mix and a very young Sean Connery.

Leprechauns are protected under European Law!

#12 A Very Unlucky Leprechaun (1998) (Rated PG) A 9-yr-old girl Molly and her father move into an inherited house that brings bad luck to anyone who lives in it. Will Molly and her father have bad luck at the “Misfortune Manor?” Molly also discovers a leprechaun living on the grounds of the home. However, it’s also unlucky. Never fear, even after the leprechaun gets Molly tied up in his shenanigans, the discovery of a four-leaf-clover will change things around.

My boys’ ages 8 & 10 yrs old, gave this movie a thumbs up. Lots of filming of the Irish countryside and with the stone fences. A simple and funny movie to watch. At least my three boys were laughing a lot during the movie.

Leprechauns have first-cousins known as a Clurichaun.

#13 Magical Legend of the Leprechauns (1999) (Rated PG-13) Halmark TV Movie. “In a land of myth and magic, a wondrous legend is about to come true!” An Emerald Isle story with a little mischief and a little magic.

What happens when a forbidden love affair ignites a war between leprechauns and fairies? Can peace and harmony be restored again at the end of the rainbow? This movie has an interesting star-studded international cast.

#14 Leapin Leprechauns (1995) (Rated PG) Watch what happens when you try to build a theme park on top of land that is secretly the home to Leprechauns.

There aren’t any female Leprechauns

#15 The Last Leprechaun. (Rated G) A tale of siblings who must stop their stepmother’s plan to destroy the Leprechaun King in Ireland. Even though it’s Rated G, there were some parts in the movie that scared my 8 yr old twins. Overall, barely anything Irish to this movie, and not very entertaining. At least that is our family review and we all give this movie a thumbs down.

#16 How to Catch a Leprechaun We watched this through Dreamscape Kids. It’s really an audiobook with Iconographic videos.

#17 The Luck of the Irish (2001) (Rated G) I haven’t watched this movie yet. It’s a Disney film about a junior high school basketball player to learns some secrets about his family heritage. He begins to turn into a Leprechaun with his ears becoming pointed, gets shorter, his hair changes its color, and….