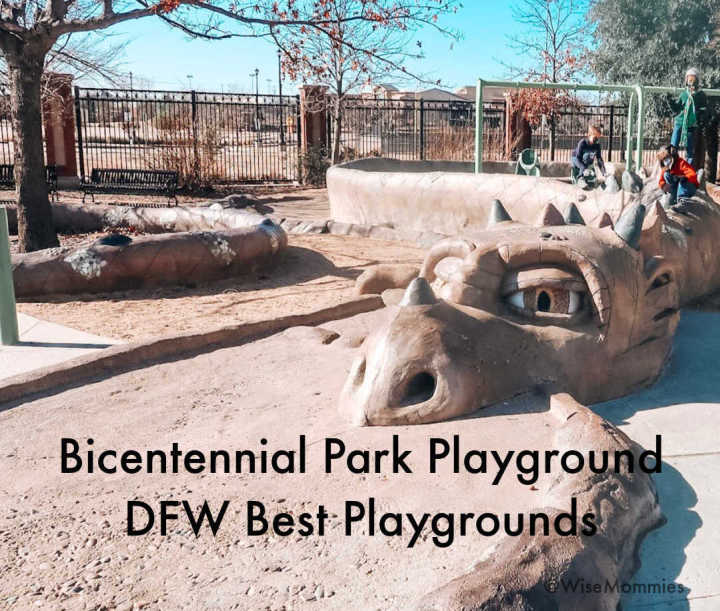 Bicentennial Park Playground, DFW is Incredible. It’s one of our favorite parks in DFW, Dallas, Texas. We especially love the dragon-themed layout, play areas designed for children of different ages, and so much more.

The Dragon Playground at the Bicentennial Park

There is a covered area with several picnic tables. Benches: There are never enough benches around playgrounds. Apparantly, mama Dragon understands that parents might be tired and enjoy sitting while they watch their kids play. There are many benches throughout the playground, and they face the playground equipment in each play area.

Dragon Playground in the Summer

We haven’t visited the playground during the summertime. However, I was told that the Bicentennial Dragon sprays water out of its nostrils. There is also a splash pad. You’ll need to check the park’s website for splash pad hours during the summer

*As mentioned above, there is also a sand pit. I’m not sure how much that sand and water mix during the summer…I’m just thinking beach mess scenario, but maybe that isn’t the case?

A Playground for All Ages

The park has play areas designed for children of different ages, and signs showing such.

In addition to the amazing Dragon Playground, the park is a modern landscaped area with sports fields, gardens, tennis courts, more picnic tables, fish pond, and more to explore. There is a huge parking lot providing plenty of parking.

🚫 No dogs allowed. That is why you’ll see the picture of our dog being walked around the outside of the park while watching my kids play.

It’s an evenly paved walkway, nice for walking. The fence around the park didn’t block my view of my kids. They are older, and were fine by themselves in the park, but I still kept an eye on them. Picture of them enjoying the zipline.

There are clean really nice 🚻 🚾 right next to the park.

We recently went again to the Bicentennial Park Playground for January’s, “Appreciate a Dragon Day.”