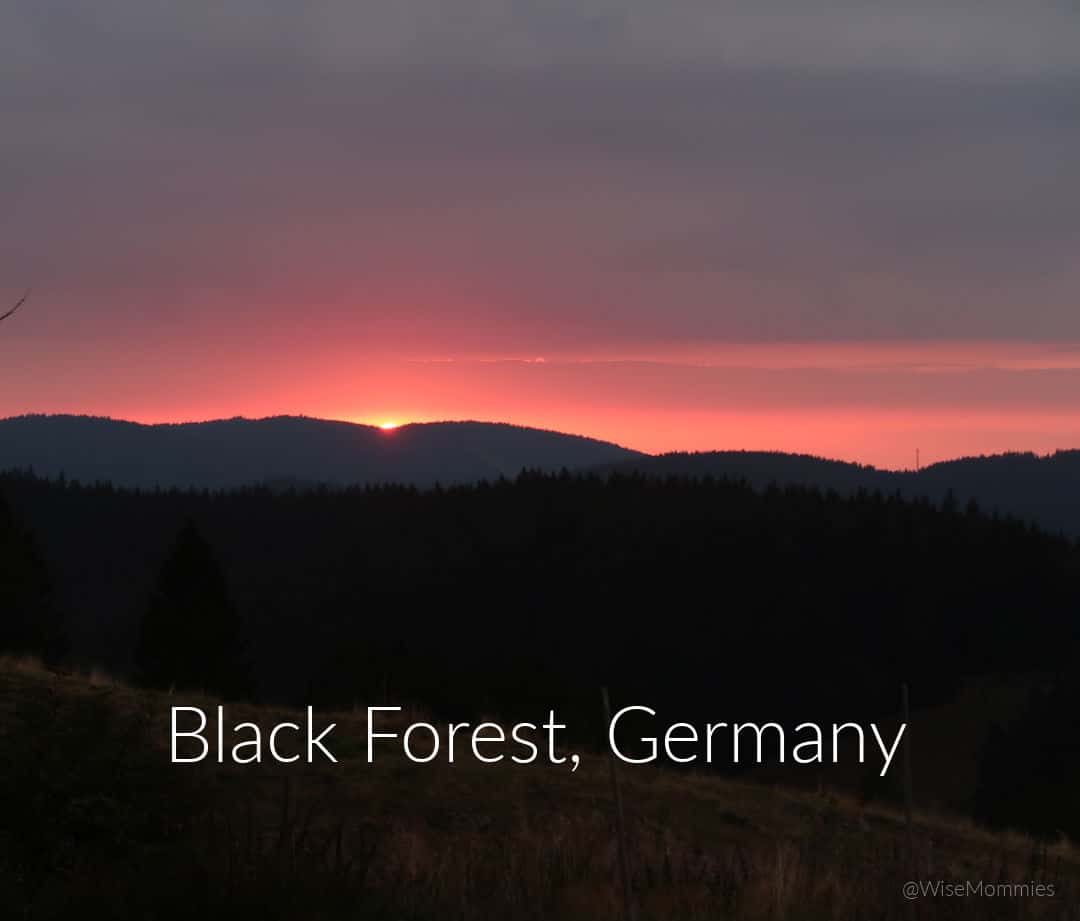 Black Forest, Germany, Relax and Enjoy! Ya, right? For one month, I traveled through Germany, Czech Republic, Poland, and Austria solo with my three young boys ages 8, 5 and 5 (twins) years old. It was adventurous and dreamy, it was always educational, sometimes shocking, often enjoyable, but never relaxing. Then, we found ourselves in the Black Forest.

The Black Forest (Schwarzwald) is located in the southwestern German state of Baden–Württemberg. When you think of the Black Forest in Germany, what comes to your mind? Maybe you think of cuckoo clocks, dark scary forests from Grimm’s Fairy Tales, Black Forest Ham, or delicious mouthwatering chocolate-cherry cake? Well, all of that is what you will find and so much more.

Family-friendly and Budget-friendly Region in German

I found exploring the Black Forest area with my three young kids while staying on a tight budget extremely easy. Of course, all the free outdoor exploration available helps in making a trip to this region super budget friendly. However, I also found museums, castles, churches, villages and places to stay much cheaper than surrounding areas in Germany, France, or Switzerland.

Much more than just forested mountain ranges to discover

Farmhouses with half-hipped roofs and strong cultural values. Marrying a Bavarian and experiencing his culture in Germany, I’ve learned that the Bavarians are extremely traditional. Outside of Bavaria, I think the region of Baden-Württemberg have also held strong to their traditions.

The traditional outfits, “tracht” in the Black Forest are very different to the Bavarians. Bollenhut, is the name of the hat that a single woman wears. No pressure there to get married!

Also, as mentioned before, authentic Black Forest cake & ham, cuckoo clocks, watchmaking, and outdoor exploration are the most popular treasures to explore.

In addition to all the cultural specialties, there are also vineyards, ski resorts, castles, Roman ruins, and thermal spa baths. Exploring the forested mountain ranges is a hikers’ paradise from all the well-developed trails to the surprise gorges and waterfalls found along trails.

How did the Black Forest get its name?

The dense growth from trees in this region block out sunlight and cast dark shadows. The black forest is divided into 6 natural forest regions. These regions are under nature conservation, which divided the regions by the percentage of forest density. Five of the regions have 60-70% density. The sixth region, the Black Forest Grinden and Enz Hills are more than 90% dense forest.

The first known usage of the name Black Forest for this region came from the Romans. The Romans called this area “Silva Nigra” which means “Black Forest” in Latin. This Silva Nigra, dark, dense forest, blocked their path as they marched through Europe.

The last time I traveled through Germany, I met up with one of my German girlfriends, Conni. I had met Conni when living in Mainz, Germany, shortly after my marriage to my German husband. We hadn’t seen one another since I had moved back to the states.

Just like my friendship with Conni, our kids quickly connected and had fun together.

Our time spent in the Black Forest was simple, slow, easy, relaxing, and enjoyable.

I had so much fun reconnecting with my friend. We all reconnected with nature, experienced some regional traditions, and enjoyed our time together in the Black Forest.

Did you know Oktoberfest in Munich is Kid Friendly?