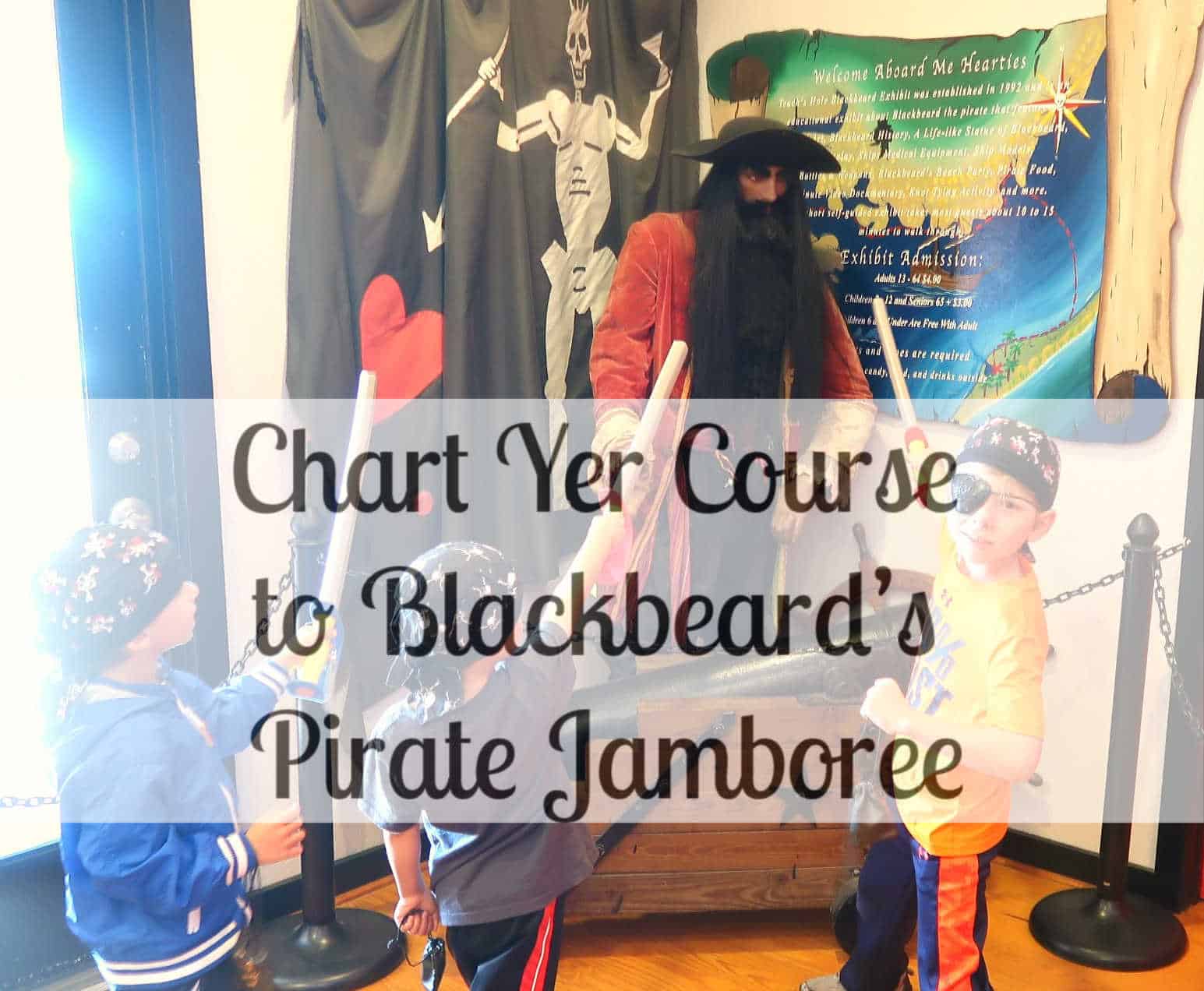 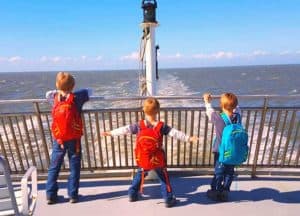 Blackbeard was an infamous and eccentric pirate of the early 1700s who met his doom at Ocracoke Island. This post contains some affiliate links.

For four days, my boys and I were dressed as pirates and took part in a living history event. Shiver me timbers! I’ve never had so much swashbuckling fun with my boys! This year, October 25-28, 2018, will be the 300th-anniversary celebration for Blackbeard’s Pirate Jamboree on Ocracoke Island.

The Whole Island was Transformed into a Pirate Jamboree

The Island really transformed into a pirate jamboree, beginning with ships coming to port in the Silver Lake harbor that were sporting the Jolly Roger (pirate flag featuring skull and crossbones) and some were authentic looking pirate ships. 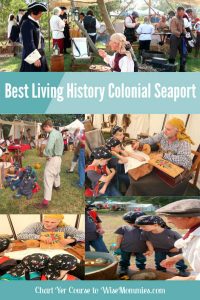 A historically accurate pirate encampment was set up close to the harbor.

In the encampment, people could walk through and experience what coastal life was really like during the 1700’s. There were living history exhibits, tavern games, and pirate skits. 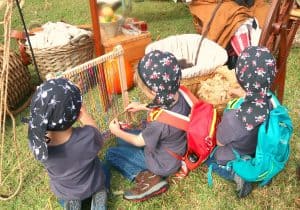 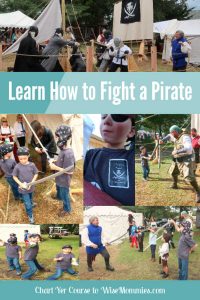 Brigand’s Bazaar:
Next to the encampment was a marketplace of seafaring crafts and wares.

Sword-fighting Demonstrations:
In the pirate encampment, my boys got to watch the TSC Pirates battle with real cutlasses and sabers in both pirate and Royal Navy styles.

Introductory Lessons in Cutlass Fighting:
Children were given introductory lessons on how to fight with a cutlass.

Learn to Fight a Pirate:
Following the introductory lesson, for those brave enough to continue, they got to bout against one of the pirates.

The Battle at Ocracoke:
Around the Silver Lake and NPS Docks, for about an hour, we watched the reenactment of the infamous last battle between Blackbeard and Lt. Robert Maynard of the British Royal Navy. This was a fierce ship-to-ship battle with cannons roaring recreating that fateful day of Blackbeard’s defeat.

More Pirate Events Once on the Island, you can pick up a schedule of events. Outside the pirate encampment, we attended some other pirate events and shows. We watched a magic show, “Captain Jim’s Magic Show: Tall tales of his peg-leg history.”

We also watched an interactive game show which was hosted by historian/author Kevin Duffus, “Will the Real Blackbeard Please Stand Up?” My boys really got into the guessing game, answering the questions and trying to guess which Blackbeard was the real one per their acquired knowledge from the Blackbeard Exhibit (exhibit info below). The Motley Tones performed music all around town!

Nearly everyone from young to old and even pets were dressed as pirates and became real-life acting pirates. People were using pirate slang and singing rowdy songs. Sometimes other pirates would stop my boys, holding up their own cutlass or sword, and demand booty. “Aaarrgghh lads gv mae ye booty aarrgghh else ye lads be shark bait.” My boys would usually challenge by holding up their own cutlass and letting them know that hadn’t any booty but were up for a good sword pirate fight while unleashing their own Aaaarrrrgggghhhhhs.

Since we hadn’t planned on becoming pirates, we didn’t have anything pirate with us. We headed to Teach’s Hole which is a pirate specialty shop on the Island. Here we found the coolest pirate head wraps, cutlasses, pirate books, hats, and more. Once we were dressed in “proper” pirate attire, we went through the Blackbeard exhibit which is inside Teach’s Hole. To learn more about Blackbeard, his ship, other famous pirates, pirate flags or weapons, go to their website Teach’s Hole. Better yet, go to them on Ocracoke Island!! 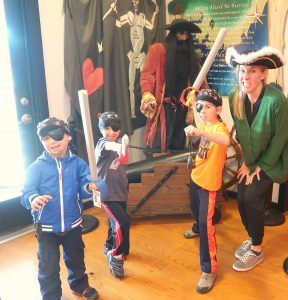 It’s a very small museum and only took us under 20 minutes to walk through the exhibit. My boys were very interested in the facts and figures. They wanted me to read all the information that went with all the artwork and artifacts, so it probably took us a little longer than most to go through the museum. This museum was the perfect introduction into the life of Blackbeard, broader insight into the life of a pirate at that time and facts about other famous pirates. There is also a hands-on knot typing activity, a short documentary about Blackbeard’s life and death and a scale model showing Blackbeard’s ships, speaking of which, the Queen Anne’s Revenge, his flagship has been discovered off the coast of North Carolina.

Blackbeard’s Pirate Jamboree takes place on Ocracoke. This island can only be accessed by a passenger/car ferry, private boat or small airplane. There is no bridge to Ocracoke.

Once we were on the island, we got around either by foot, golf cart rental, or the bicycles and scooters which I had in the car. Ocracoke Village has a speed limit of 20 mph making it even more family friendly for getting around.

Translation for Some of the Pirate Lingo
in This Post

Shark bait = What you are after you walk the plank.
Booty = A treasure
Jolly Roger – Pirate flag featuring skull and crossbones
Cutlass = A curved sword, that is thick, heavy and shorter than most other swords with a single sharp edge. A blade for pirates!

Finishing up our Pirate Jamboree Experience:.

Have you been to Ocracoke or a Pirate Jamboree? What’s one of your favorite destinations discovered while traveling? Another Road Trip Break Idea and Roadside Attraction in the USA that we discovered: On the way to NC, we spent some time at this Lost Sea and loved it!

The 3 Forgotten Verses to The National Anthem USA