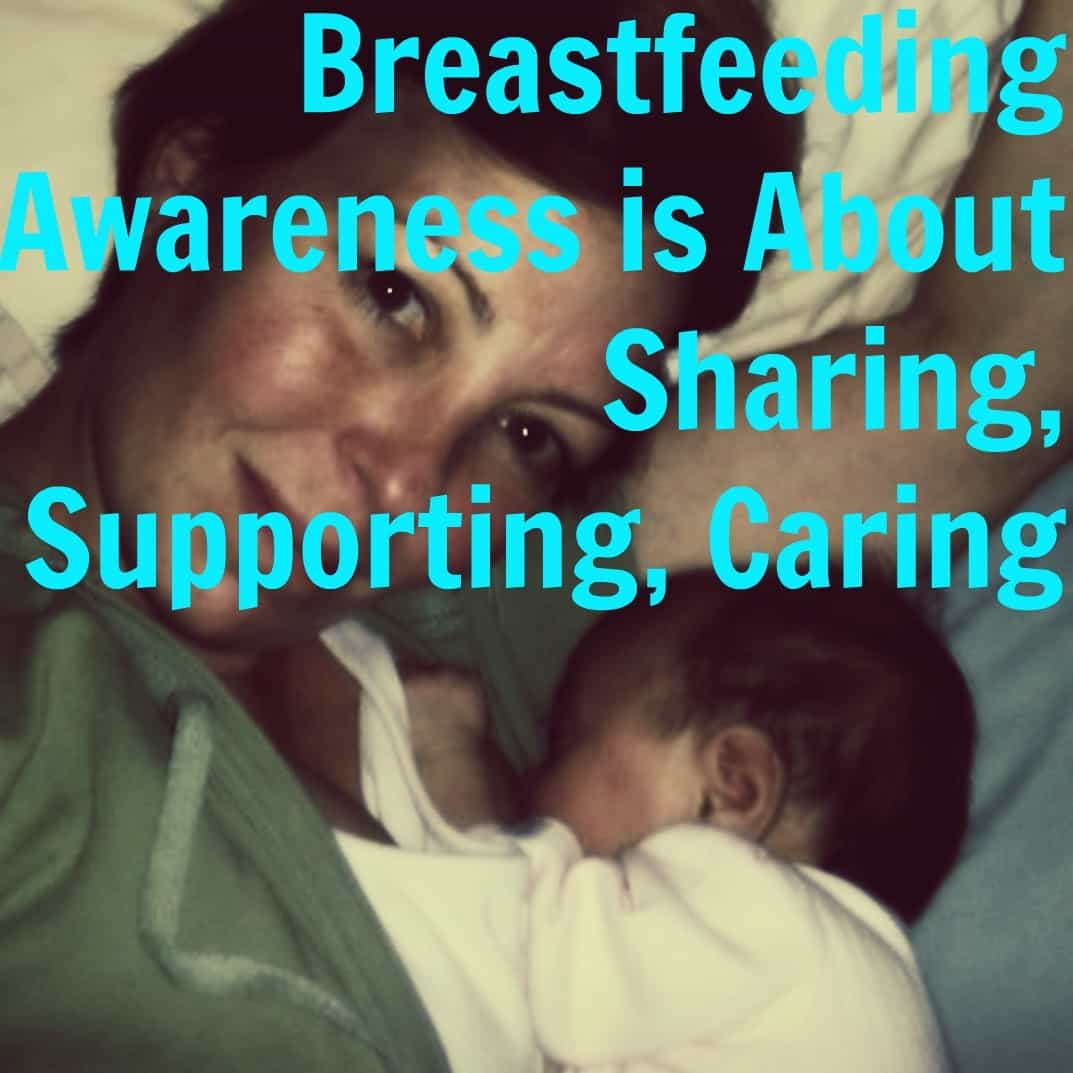 Today is the end of World Breastfeeding Week but just the beginning for the awareness that needs to surround something that is natural but needs so much support. Breastfeeding does not just include feeding a baby or child with breastmilk from the breast directly, but also includes pumping breastmilk to feed and a  greater awareness is needed for both of these feeding methods. Here are a few examples of how breastfeeding awareness is about sharing, supporting and caring. I think in choosing to breastfeed, we need to support and care for those who can’t, those who struggle and those who choose not too.

I always wanted to breastfeed and thought I would do so when we had our first child. We found out about our firstborn, our son, four hours after he was born. By the time we held him in our arms he had been formula fed and we were already involved in a crazy life of figuring out parenthood. We had been offered some donor breastmilk from friends but we just needed things to be simple…so we stuck to formula. My son ended up having milk & soy protein intolerance which required us to feed him a specialty formula. If we would have used breastmilk it would have added more stress to our situation and for that I am so grateful to have formula as a way to feed my son. There were many times when I would see photos or posters saying breastmilk was the only way to feed a child or be in conversations with women and felt unsupported because I was not breastfeeding. There were also many conversations I had with women who sympathized with me and shared their own stories of sadness for not being able to produce enough milk or pain with breastfeeding so they stopped early and felt just as saddened as I did.

I breastfed my daughter until she was 26 months. Our breastfeeding journey was complicated and so fulfilling for both of us. She was a hungry eater and also preferred milk to soothe her in times of distress and to have me help her go to sleep. There were many days where I was “touched out”, or just wanted some personal space. There were also so many days where I knew she was struggling with developmental leaps and big emotions and she would come snuggle with me and immediately calm down with latching on. Watching her eyes light up when she knew she was about to nurse has been one the greatest joys in my life. I was one of those people who did not respond well to pumping, at most I could pump about 4 ounces of milk at any given time of day, and on top of this, she did not take the bottle easily. It was rare I could leave for more than a few hours because both of us struggled with this part of breastfeeding. I found so much support in sharing my experiences with other woman, in person and online, it really helped me get through some hard times with breastfeeding. I felt these women cared for me in so many ways.

I have friends who have managed to support breastfeeding in so many ways. My friend, Marianne, welcomed her son by surrogacy and she induced lactation to feed him. I also have friends who exclusively pumped for six months to a year. This means not only did they have to find multiple times a day to pump, they also had to find time to bottle feed their children. I have many friends who have combo fed their babies, supplementing their own supply with formula as needed. I have friends who have donated hundreds and thousands of ounces of milk to people in need. Who are these people who need breastmilk for their babies? People with premies, people who want to supplement their own milk supply, people with adoptive children, people with children born out of surrogacy.

Talking about surrogacy. I have a special story to share about how breastfeeding women surround a baby they don’t even know. Our friends were expecting a baby boy through surrogacy and asked me how they could get breastmilk donations. We asked around on a few milk sharing sites but did not get many donations. Over the last 3-4 months I have been posting on various local Facebook groups asking women to donate their breastmilk to my Godson. I have traveled all over the city procuring over two to three-thousand ounces of milk. Here is the news story that we were featured in.

Baby Gabriel would not have been fed breastmilk if it had not been for these amazing women and their generosity. I am so happy to be part of a special way that breastfeeding and awareness can have on his life in so many ways.

Although there is only one week dedicated to World Breastfeeding Week, breastfeeding awareness and support is needed year round. We have a long way to go to have breastfeeding be the norm, in the US or other countries. Only through sharing stories and support can we help ensure that most children have breastmilk for some of their lives.

Why Room Sharing Prevents SIDS by 50%

3 thoughts on “Breastfeeding Awareness is About Sharing, Supporting, Caring”