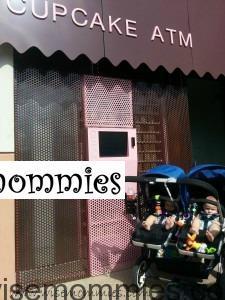 Look at this interesting little place that we stumbled upon, yesterday, while out for a walk. A 24 hour ATM for cupcakes via the store, sprinkles. So very interesting! This is ONE of only 3 cupcake ATMs in the world….of course Dallas would debut such. I’m beginning to think Dallas truly has everything!

I wouldn’t hurry over to the ATM just yet. Seems they are still working out glitches as I observed a family before me unsuccessfully retrieve a cupcake. Still, the people at the store gave a complimentary cupcake to the family waiting. Looks like the store has good customer service, in addition to a convenient ATM, which is always a plus as far as I’m concerned!

Actually you might want to check the store out now as: Everyday until mid-August, one box will have a $50 gift card! Friday, July 19, and Saturday the 20th, the ATM will have gift cards worth $10, $50 and $100 hidden inside the cupcake boxes. That would be a nice surprise!!

Sprinkles and their ATM are located at 4020 Villanova Drive, in the middle of the shopping center, off of Northwest Hwy and Preston Rd. Store hours are M-S 9am-9pm and Sunday 10am-8pm. Cost of the cupcake via ATM is the same as store bought, $4.

Disclaimer: Twins with an awesome stroller do not come included; I just always try to pop them into my pictures when I can because I think they are so preciously cute

Would you like to withdraw a cupcake? I know my toddler would!

Travel to Mexico Without Leaving Dallas