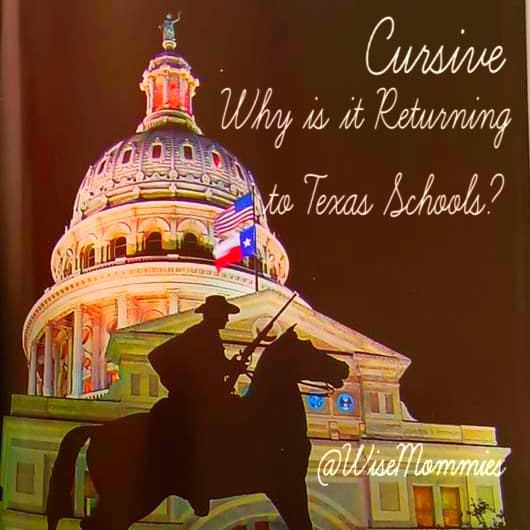 Cursive in Texas Schools: Last week, Texas became one of “fourteen states, to have passed new standards making cursive mandatory.” Cursive: Why is it Returning to Texas Schools? Back in 2017, I first published a post that contained a significant amount of research and science supporting the benefits of cursive being taught in schools and of writing in cursive. 10 Reasons Why Cursive Handwriting Remains Relevant!

The following post contains shortened bullet points of the cited scientific facts and research-supported facts published originally in my first post supporting and explaining the reasons why cursive is being brought back and mandated in Texas schools as well as other schools in the United States and worldwide. This post contains some affiliate links.

I published that post, 10 Reasons Why Cursive Handwriting Remains Relevant, for several reasons:

1) My own son was learning cursive in school, 2nd grade, and I was trying to support the cursive camp at that school, and the reasons why it should be taught more broadly in Texas schools.

2) Most articles about cursive lacked a research-supported solid argument for the reasons why cursive should be taught in the 21st century, undergirded by cited scientific facts and accessible documentation.

The Science and Research Behind It: Cognitive Development: Print vs Cursive:

Like this photo, we have Virtual Reality Headsets and cell phones but the woman is still creating art with her hands, fingers, and a paintbrush. “With every form of art overridden by technology, we are slowly squelching every creative aspect from the lives of our children. Limiting your child’s ability to read and write cursive is not building self-dependency but a drive-less dependency on technology.” WiseMommies Photo by Billetto Editorial on Unsplash

“Printing, cursive writing, and typing on a keyboard all use distinct and separate brain patterns, each result with a different end product.”a published study by Psychologist, Virginia Berninger,

Laptop vs Longhand: Cursive handwriting in the 21st century; why on Earth is it necessary in a world of print?

Weekly our family gathers together to read & write in our Commonplace Books.

Some Books Addressing Benefits from Cursive Psychologically and other:

I also bought the book, CursiveLogic Poems, Rhymes, and Songs: Bridge to Level 2, at the Great Homeschool Conventions, in Texas, from Janice Campbell. Her website is full of literature, writing ideas and so much more. I heard her speak at the Homeschool Convention and walked away with so much food for thought all via handwritten notetaking, of course!!!

In 2017, the Texas State Board of Education changed the requirements for the Texas Essential Knowledge and Skills, TEKS. TEKS is the English Language Arts and Reading portion for the education standards set for Texas.  To quote exactly what the TEKS says, starting this fall 2019,
§110.4. English Language Arts and Reading, Grade 2, Adopted 2017.
“The student is expected to: develop handwriting by accurately forming all cursive letters using appropriate strokes when connecting letters.”

Forty-five states and the District of Columbia use the Common Core’s English Language Arts standards which don’t require cursive to be taught in public schools. “Fourteen states, including Texas, have all passed new standards to make cursive mandatory. “

Cursive: Why is it Returning to Texas Schools?

For all the research-supported solid arguments listed above in this post along with the cited scientific facts, how can one still have a reason as to why cursive should not be taught in the classroom? I’m happy that my state of Texas realizes the need and benefit of bringing cursive back!

“To write by hand in the 21st century is to not just find a style in script, but in movement, too — to rediscover how we map out kinetically with our hands the pulse and feeling of language.”

Doing Something for the family (or really me)