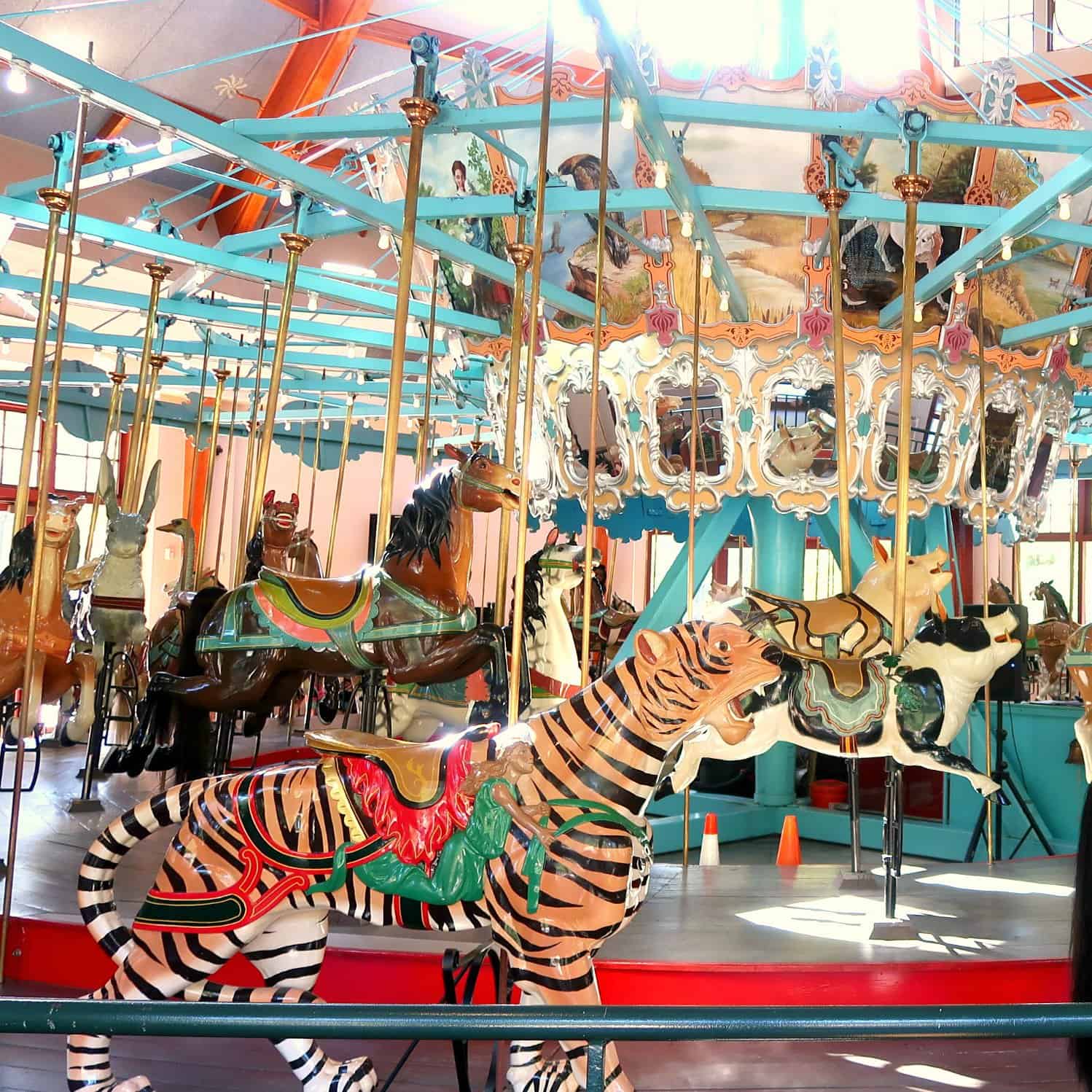 If you live in North Carolina or find yourself driving through this state, Pullen Park is an entertaining and affordable amusement park to explore. This park has so much history with rides and fun for all. Last month, via a family road trip, Texas to the East Coast, we explored Pullen Park in North Carolina.

Oldest Amusement Park?
What initially intrigued me was that it was built in 1887, making this Park the 5th oldest operating amusement park in the US and 16th oldest in the world.

Nostalgic:
I really loved this park. It felt nostalgic to me, reminding me of a sweet little amusement park in Dallas, TX, Penny Whistle Park, from my childhood, that closed down.

Carousel:
One of my favorite features of the park is the 1911 Gustav A. Dentzel Menagerie Carousel.

Old Carousels:
The fact that this carousel is 106 years old and at this park to ride is unreal. I love carousels and the older the better. Carousels feel so magical with their fast moving bright colors and feeling of nostalgia. I always feel as though I’ve stepped inside a music box when I’m on a carousel. One can feel in flight while spinning. You can be of any age to savor a carousel ride.

More about this Carousel:
Fifty-two animals and two chariots, 16 are stationary and 36 animals are galloping. The inside rim of the machine has 18 large gilded mirrors and 18 canvas panels. The outside rim has 18 large panels depicting animal portraits alternate with smaller panel paintings of landscape scenes.

The Wurlitzer 125 Military Band Organ provides music. And if you love carousels like I do, then you know that the music adds to the nostalgic feeling and excitement of riding a carousel.

Could have stayed all day:
We enjoyed this park so much that I was there with my family from 10am to 5pm. During October it closes at 6pm but we were there on a Friday and had the option to stay for dinner and a movie in the theater area at the park. It was a wonderful movie being shown, Holes, but my boys were a little too young still for this movie.

Picnic Areas:
There are several picnic tables and grassy areas for picnicking and you can bring in your own food. For a real treat, you can purchase Loco Pops, a local North Carolina favorite. Loco pops are without food dyes or artificial flavors or HF corn syrup. These loco pops were seriously delicious!

Admission:
Admission to the park is free but there is a small fee, $1 for the train, water boat, and carousal and $4 for the pedal boats. 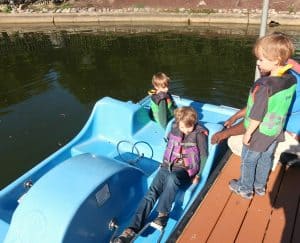 Pedal Boats:
My second favorite ride at Pullen Park was the pedal boats. Mostly because my boys had such a blast and I let my oldest son have complete control of steering. The scenery for the boat ride was calming and dreamy. Usually, there is a time limit, 45 minutes-1 hour but we were one of three boats on the water so the staff let us stay as long as we wanted. After 2 hours I said enough but my boys could have gone even longer!

Superb Layout:
As a mom with three young boys all close in age, especially the twins, I appreciate places of entertainment that have a superb layout. That means something where I can let my three boys run, explore and play with minimal stress of me watching them. And I like a layout that allows me to see all three simultaneously. Pullen Park is that layout! First of all, it’s fenced. Not only was Pullen park fenced in but each feature of the park was separated by pathways or fences.

Playground:
As mentioned above, the layout of the park is wonderful. The play areas are separated and well designed for different ages yet it’s easy to keep an eye on children simultaneously while they play in the separated play areas.
There are sand areas with diggers and sand areas with water. Messy, yes! Fun, yes!!

Caboose
There is a real Norfolk Southern Railway caboose to explore.

Famous Statue:
There is an Andy & Opie Statue, that you can take pictures with or just enjoy, from the well-known TV show: The Andy Griffith Show.I forgot to take my own picture of the statue because my son was using my camera to take pictures of some fossilized leaves he had discovered as well as some turtles.

Well Maintained:
This park is clean and safe. Equipment is kept updated and cleaned and park staff is present. 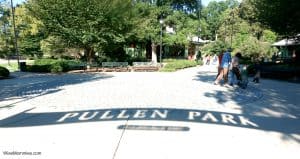 To be honest, with or without kids, this is a park I would visit for a stroll around the pond or to ride the carousel now and then!

Have you been to Pullen Park?
What entertaining and affordable amusement parks have you explored or do you have on your bucket list?

Tips for Traveling With Your Nanny