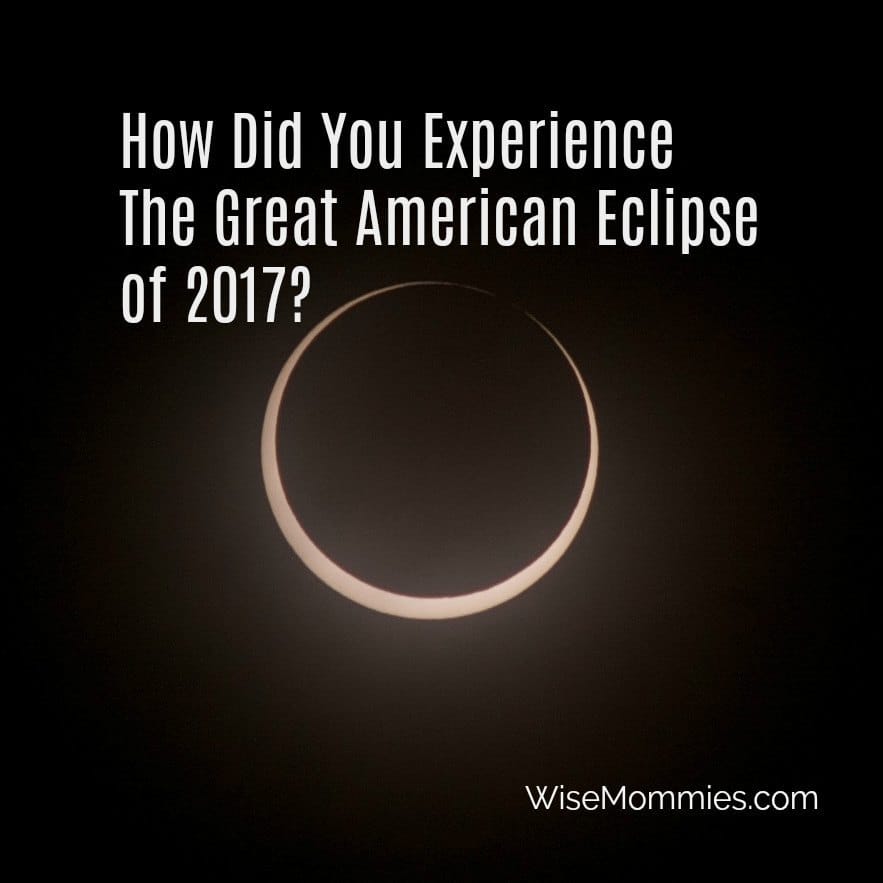 Have you seen an eclipse? If so, what type, where and when? My family recently experienced The Total Solar Eclipse of 2017 also referred to as “The Great American Eclipse of August 21, 2017.” This was the first total eclipse visible to go across the United States since 1979 (38 years). Depending on where in America one was viewing, you had either a partial or saw the eclipse in totality across a large swath of the contiguous states.

Our Partial Eclipse:
Unfortunately, for The Great American Eclipse 2017, we lived in a place that was not in the path of totality. We observed 75% coverage, and even that was a preternatural experience!

America’s Next Total Eclipse:
In just seven more years, America will have another total eclipse, and my city will be directly in the path of totality. Pretty unbelievable and exciting!!!

Viewing Parties or a Place of Silence:
During solar eclipses, there are viewing parties set up everywhere. What did you experience or think you would prefer? A social viewing party or a place of silence to meditatively watch an eclipse?

I thought a viewing party would be fun and help my young boys to be excited about what was happening. Hours before the eclipse was to even begin, I spent nearly 45 minutes driving to a few viewing party places. All parking lots were full, streets blocked off and crowds of people walking from afar for attendance. I could see my situation, especially being alone with three young boys, getting messy with the extra crowds of people, extended walking to the viewing place and maybe even being overstimulated with too much around us for the event to be truly absorbed.

In the end, I headed to a park close to home, and experiencing the eclipse there was amazingly beyond all expectations.

Something Everyone Should Try to Experience in Their Lifetime:
Weeks leading up to the eclipse, I prepared my boys for what would be happening through books, role play, having my boys model the sun, the moon and the Earth,and utilized some online videos from NASA. In one of the videos, we watched it describe the sounds and feeling around one in nature when an eclipse happened. Blimey and goose bumps, because when we were outside, everything that the video showed us would happen, did and it was very uncanny. There are no words to fully describe the complete feeling, but it is something one should experience in their lifetime.

Our Place of Silence:
My boys were the first to comment on the wind picking up and the temperature precipitously dropping. Especially with Dallas experiencing nearly 100 degrees and the sun strongly shining on us, we could dramatically feel and see the change. Our park backed up to a field, and watching the whole area slowly darken was eerie. Then all these crickets started chirping and the cicadas got louder and it was as if the crickets and cicadas were having a loud conversation with one another. At one point, all of nature was quite loud around us, and yet all seemed very still, the temperature dropped quickly, strange shadows were seen and we heard distant dogs start to howl.

It was a moment that you looked around and took notice of how nature really affects everything. My boys hit the swings to see if they could go higher with a possible change in gravity. As they were swinging, I spent a few moments alone with the natural phenomenon of shadows the trees were casting. Between the leaves above, crescent shadows were projected on the ground below, something only seen during an eclipse.

I created little worksheets to fill out with my boys so we could document this special historical moment further.

4 Types of Solar Eclipses:
There are four types of solar eclipses. What type of eclipse is dependent on how much of the Sun is obscured by the Moon.

#1 The Total Eclipse: The moon moves between the Earth and the sun, completely obscuring the view of the sun for a few minutes. A total eclipse is the most spectacular of all four eclipses. Especially since the moon is slowly pulling away from the Earth; there will eventually come a time when the moon will be too small for a total eclipse to happen.

#2 The Annular Eclipse: The moon’s orbit around Earth is not perfectly round but is oval or elliptical. Depending on the orbit, the moon will appear smaller or larger than the sun. When the moon passes in front of the sun but it is too small to cover the sun for a total eclipse, you have an annular eclipse.

#3 The Partial Eclipse: When the moon moves between the Earth and the sun but only partially obscures the sun.

#4 The Hybrid Eclipse: When an eclipse is a combination of a total and annular eclipse depending on where one is observing the eclipse. On some points on Earth it will appear as a total eclipse but an annular eclipse to others.

My Solar Eclipses:
In 2001, I observed an annular solar eclipse, in Costa Rica.
In 2017, I observed a partial eclipse, during The Great American Eclipse, in Texas.
In 2024, I’m hoping to observe a total eclipse in Texas.
Seeing a Hybrid eclipse is also on my bucket list.

Have you seen an eclipse? If so, what type, how did you experience/feel, where, and when?

Photo credit: onohiroki via Visualhunt.com / CC BY  Wording to the picture via WiseMommies