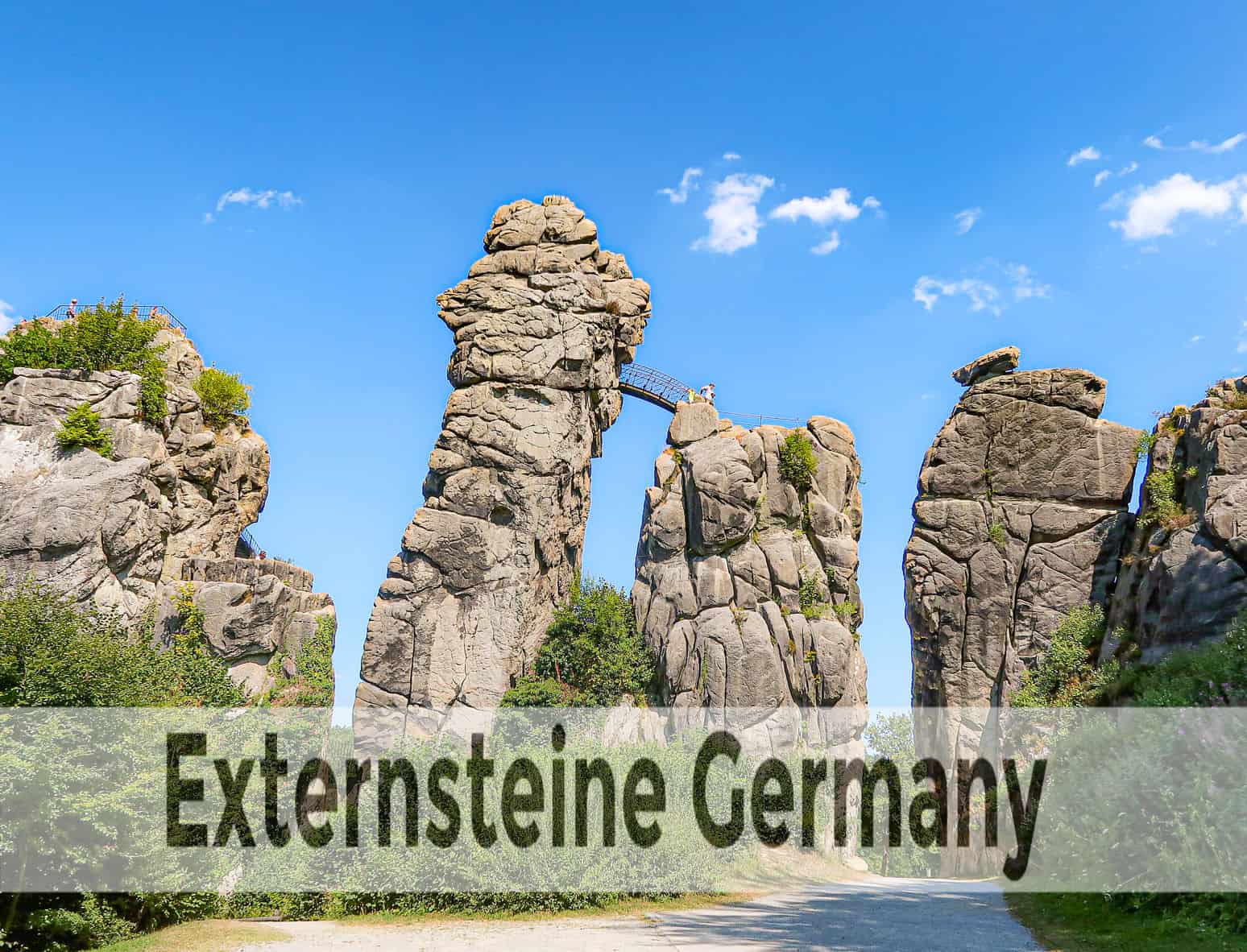 Externsteine Germany – Mysterious Sacred Site is one of the most bewildering and historically debatable archaeological sites in Central Europe. Located in the Teutoburg forest near Horn-Bad Meinberg, these huge vertical sandstone rocks are over 70 million years old.

As far back as 12,000 yrs ago, The rocks of the Externsteine offered Nomad hunters protection from bad weather.

Located at the entrance to The Externsteine, there is an information center that provides many details about the archaeological, natural, and cultural history of Die Externsteine.

There they have many artifacts on display. They even have Paleolithic (Old Stone Age) artifacts such as an ax and stone blades. These nomadic hand tools were discovered at The Externsteine.

There are several astronomical elements that can be found in The Externesteine. At the top of this Externsteine Rock we saw the remains of a prehistoric temple constructed astronomically with celestial alignments.

Above the stone alter in the temple was a small circular hole. That hole aligns with the sun during the summer solstice.

The Externsteine caves have been historically documented. Traces of fire with hearths, from the 14th and 15th centuries were discovered in the caves at the base of the sandstone spires.

The Relief of the Descent from the Cross.

Also known as The Tree of Life, medieval hermits made this relief carving into one of the rocks.

The carving shows supposedly shows a pagan tree known as an Irminsul. The tree is bowing as Jesus is removed from the cross (John 19:39-40). This is the story that I read. However, historians are still searching and arguing over this carving.

While traveling around Europe on our nomadic pilgrimage, we had the opportunity to explore The Externsteine.

Seen in some of these pictures: Our dear and amazing German friends surprised us with a day excursion to this mysterious sacred site.

Externsteine Germany has been a place of pilgrimage, a monastery, prehistoric temple, prison, geological wonder, and more.

The five biggest Externsteine Rocks have been labeled (I -V), and these are the names and meanings for each of those rocks.

I. Grottenfels {cave rock} Named for the caves inside the rock.

III. Treppenfels {stairs rock} Monks carved staircases and other carvings into the walls of the rocks. Now the stairs are somewhat unleveled. However, not bad for medieval aged stairs! Most importantly, they are convenient in helping visitors to climb to the top.

IV. Wackelsteinfelsen {wobble stone rock} has a large stone on the top. You can easily see it even in pictures. That large stone looks ready to fall off at any moment. Not to fear, this rock has been safely secured with iron hooks. It won’t be wobbling or falling.

V. Ruferfelsen (crier rock) is a rock that looks like a head calling out at the top.

Under the Nazi regime, The Externsteine was used as nationalistic propaganda. Neo-Nazis still visit this place.

I can understand valuing the massive rocks for their Germanic folklore and history. However, I’m not clear with how they have really played a part in supporting Neo-Nazis.

Neo-Pagans visit for the astrological aspects, cosmic energy, and history of Germanic paganism.

Large Neo-Pagan groups flock to The Externsteine every year to celebrate the winter and summer solstices. Many of these visitors campout. There is a Woodstock-like festival at this site at certain times of the year.

Hermanndenkmal in the Teutoburg Forest

Including the numerous hiking trails around, the whole Teutoburg area is historically famous in Germany for many reasons. One of those reasons being the end of the Roman Empire’s conquest of Germany.

Arminius, later renamed “Hermann,” led the Germans into a battle that destroyed three entire legions of the Roman Army.

Next to the Teutoburg Forest, there is a colossal statue, Hermannsdenkmal, commemorating this battle defeating the Roman Army and the German warrior Arminius. This area is sometimes also called “The Land of Hermann.“

Hermannsdenkmal is Located: Grotenburg 50, 32760 Detmold, Germany. If driving, make sure you have cash for parking.

One of the most bewildering and historically debatable archaeological sites in Central Europe.

Did you know about this site? Have you visited this place or something as archaeological and historically bewildering?


Do NOT follow this link or you will be banned from the site!