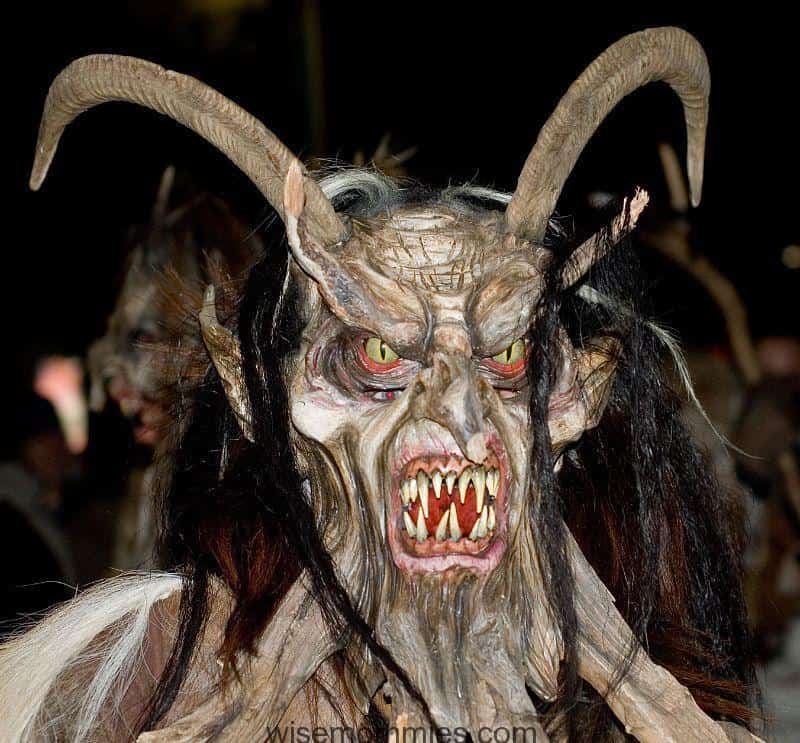 Do you know what a Krampus is or rather WHO Krampus is? I know who Krampus is only because I married a German and was introduced via my German family to this man or rather Christmas Devil. And let me tell you now, forget the bogeyman, Krampus is scary. When living and working in Germany, I had many Germans tell me how they don’t like even celebrating St. Nicholas or Santa Claus because they had such bad memories correlated with Krampus.

Krampus is a horned figure that could represent something of devil imagery. It’s seriously scary and creepy all the way from its horned feet and demented goat like appearance down to its long pointed tongue. In some towns in Germany, there is a Krampus Run where people dress up as a Krampus and parade through the town scaring children and some adults.

In former times, Krampus would sometimes visit alongside St. Nicholas to the homes and places around town. Krampus can be seen carrying birch branches or whips which he uses to punish naughty children with, chains to symbolize the binding of him to the devil, or even a sack which it uses to kidnap children for drowning or transporting straight to Hell.

If parents think they have a hard time getting their kids to smile for pictures with sweet jolly Santa Claus imagine the difficulty with Krampus standing close by. Apparently Krampus is making a come-back in popularity in Germany. I’ve just added the Krampus run to my bucket list. Would you have any interest in seeing a Krampus run?

The following is a great video showing a Krampus run in Munich, Germany. Until my sister-in-law forwarded me this video, I had had no idea just how scary looking the Krampus appeared.
NY Times Video The Krampus Returns

Who is that Christmas Devil called The Krampus?