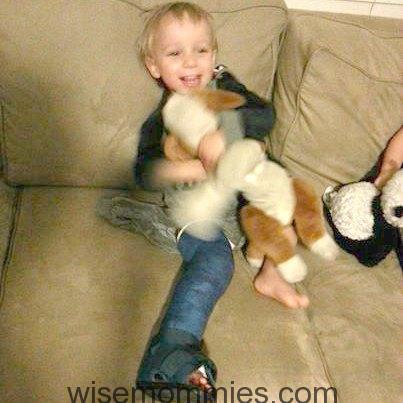 Today is TwinZone Tuesday where we talk about twins and multiples, and how appropriate because I’m feeling doubly overwhelmed today. Yesterday I spent 7 hours calling doctors, making appointments, filling out forms and waiting in doctor offices to finally get a broken tibia diagnosis and cast on the leg of one of my twins.

I thought this situation would NEVER happen to me because I’m this crazy annoying helicopter mom (way overprotective) that often annoys other moms and my boys, but IT DID HAPPEN TO ME!!!!

Small examples of how annoyingly helicopter mom I am:
1) I have a small medical kit 24/7 in my diaper bag, minivan, kitchen and one in each bathroom. I made the medical kits myself and have often used them for the children of other friends but never for my own. I sort of believe that as long as you are prepared “it” won’t happen to you.
2) You’ll always see me stressed and sweating while watching my three boys at any event or playground as I have made it my highest priority to never let one even get the slightest scratch, fall, or cut. This is NOT easy to do with three boys 2 and under or when they were three 3 and under…
3) You know when they say you can’t watch your kids all the time everywhere, well I DO!!!
4) Just of note, I have three VERY full of energy boys that run, jump and go so up to this point to say that they have never had an injury could be unbelievable if you knew my boys.

Crime scene:
See this sweet lazy boy chair, purchased for the comfort of breastfeeding and reading to my many boys, which it has served for nearly 5 years but now it has been deemed the culprit for our drama.

Crime scenario: Two of my boys were sitting in this chair. My preschooler got out of the chair. As my toddler was getting out of the chair, my preschooler put the foot rest down thinking he was helping his brother but then the toddler ended up falling on his leg instead. I was sitting only inches away on the couch facing the chair during this unforeseen scenario. It was not even 12 inches so I couldn’t imagine that my toddler could really be in such pain.

I honestly was so shocked that it was a break in the bone and that my son had to be casted, as the doctor was telling me, I started gushing tears. One of the nurses brought me a whole box of tissues, and I nearly used the whole box. I cried the whole time he got casted, while the doctor and nurses talked to me, checking out, walking to the car and again when I called my husband to tell him the news. As my son got casted, the staff kept saying to my son, “your doing so well”, “what a brave boy” and I’d reply, “yes he’s doing great, I on the other hand, not so well.”

Now I’m facing a whole new set of issues from getting around to just managing my three boys with one in a cast. Imagine how I felt when the doctor said, due to the cast on the leg, you cannot take that child to sandboxes, playgrounds, uneven or gravel roads, around mud, dirt, avoid rain, getting wet, baths…..just keep him indoors for the next TWO MONTHS which means keeping all three boys indoor for the next two months. Am I really homebound for the next 2 months? My boys will go crazy and destroy our home if shut inside for longer than 2 days. And I’ll go completely insane! This is just trouble trouble. I have no idea how to move forward right now.

I know that I will go on some outings with them, it is just figuring out where and how. Where am I going to take the boys that will allow them to get some of their energy out while keeping the casted twin safe and able to also get some energy out? How am I going to bathe my other two boys and keep my casted twin from getting near the bath tub? I have to carry the one twin around everywhere I go with his big heavy cast and the other twin throws an angry fit because I’m not giving him the same attention. I feel like I’m in a play for a Christmas Carol. As my boys and I go from room to room, I must lift and carry my casted twin and want to always say, “we can’t forget Tiny Tim.”

I know I know, this could be worse. We have a pool so at least this didn’t happen during swim season. Also, we have family arriving for Christmas for nearly a week which means helping hands to be grateful for. Just in this moment, I’m feeling mommy guilt for my poor casted child, and overwhelmed with my to do list that I had wanted to finish before hosting family in our home. Forget double trouble: This is just trouble!

Every Tuesday we publish a post from moms of Multiples for the TwinZone Tuesdays. Are you a mom of multiples? Are you in the TwinZone? We would love to connect and hear from you! You might also enjoy reading our past twin mom guest post, It takes a Village from Emily. And other posts of possible multiple interest: How and why to be thankful for laundry, Organizing for twins.

23 Reasons Why Having Twins is Double the Greatness