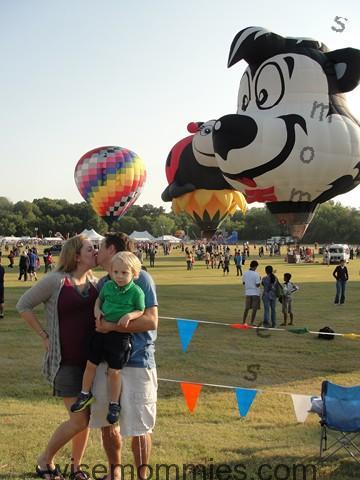 My son just loves balloons. Last month, we attended a hot air balloon festival. That was really a lot of fun. We arrived around 6am and watched the sunrise. My husband is not really a morning person, but I absolutely love getting up early, especially when starting a day with a beautiful sunrise, blue skies, loved ones sitting beside you, the atmosphere of a balloon festival, and of course a nice hot cup of Joe.

We had no problem waking our son up at 5am. The night before, we explained the festival, and we let him preview the balloons via the computer. He spent nearly an hour scrolling through and viewing them on the computer. Waking him up, we told him to hurry before the sun got up and we were going to see the hot air balloons. Within minutes, he was out of bed, running around to get ready.

As some of the balloons had just started to inflate, and we were eating our breakfast, unknown to us, a bee had landed on our son’s shirt, made its way inside his shirt and stung him. Our poor son started wailing and screaming, and we immediately knew something was wrong. My husband pulled the bee off and the stinger out then he went to get something to put on the sting. As soon as he had left, I was trying to console our still screaming child. I started to point out the balloons being inflated, and this awesome distraction, despite his pain, quickly won over and not even one more cry came from our son. One tough boy! I might have still been crying.

After 15+ balloons were initially launched, everyone was allowed to walk around the launching site. Our son really enjoyed walking under the balloons, and you can see below, in the pictures, the crew even let him hold “the” string/cord that held the big ladybug balloon down on the ground. He really loved doing this and we could barely get the cord away from our son to give back to the crewman. Then at one of the baskets, they lifted my son up to meet the pilot and go into the basket. Our son kept saying that he wanted to go up. Great that our young toddler already has no fear, what will it be like for us in his teenage years, oh boy!

After we arrived back home, we printed out and did some activities together which supported the theme of balloons and the letter B. I also showed my son France, on his table mat which has countries on it, and explained how the Montgolfier brothers, from France, were the ones who invented the standard hot-air balloon.

Click here for some of the printable activities that we used:

Inflate a Balloon with science

Toddler is thankful for balloons

Road trip with infants and a toddler