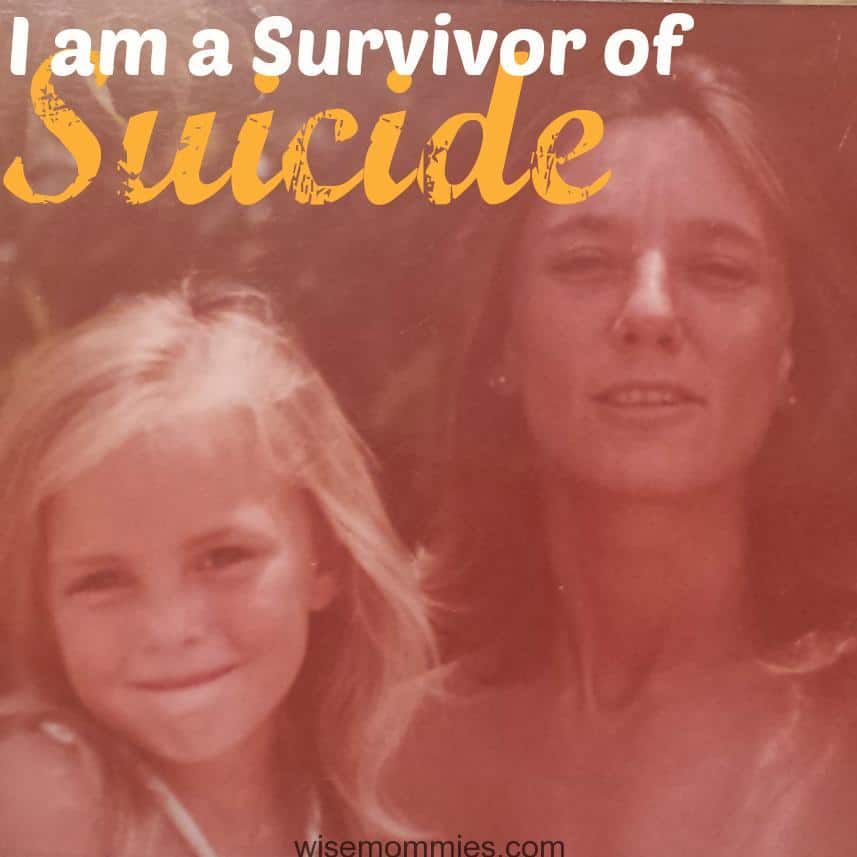 I always knew how my mom would die. From an early age she told me she would end her life, she always said it would be after she had grandchildren. It wasn’t anything morbid or weird to me, just a fact of life and something I knew would happen. I never questioned it. She LIVED for me and her future grandchildren. She bought a rocking chair when I was in my teens and made sure I knew she was going to rock her grandbabies in that chair. She lived to see me live, to see me grow up and become the woman she never could be. But I always knew I would lose my mother in an unnatural way long after I had children.

Then one day in March 2000 a few days after she turned 47, and I had just started to live on my own, I had my last conversation with my mom. I was over 1,300 miles away and I could do nothing but just wait and see if I would talk to her again. Over the next few days I called and called but there was no answer. I finally reached out to two of her friends and asked one of them to check on her. In my heart I knew the inevitable had happened, but having her friend call me back and then having the police show up at my apartment door and announcing my mother was dead by her own wishes was one of the worst nights of my life.

I am a survivor of suicide. I haven’t attempt suicide, but suicide has taken someone close to me and I survived. When you are a survivor of suicide, your life changes. It doesn’t matter if you knew it could happen, or if it was a completely unexpected event, you feel like YOU personally had something to do with this death and this loss. Suicide is hard for survivors to live through because unlike death by natural causes, there is often a lack of intervention and support for the deceased before they die and there is a lot of guilt involved. There is also a lack of support and understanding for us survivors. We walk through the world grieving but also questioning every moment, conversation, interaction, or lack there of, with our loved one.

After my mother killed herself, I felt lost and alone. I was in a new city just making friends, and starting my life after college. I was angry, confused, guilty and coping with all the emotions of grief. Then I walked into a Survivors of Suicide (SOS) meeting that is held by the American Foundation of Suicide Prevention (AFSP).

The logo of AFSP is a lifebuoy and that group was really my life saver. The other survivors and I spend many hours a week pouring out our hearts and sharing our deep emotions but also selflessly supporting each other through each other’s pain. We each knew what it was like to be a survivor of suicide and in that room, that is the the lifebuoy many of us needed to make it day-to-day. My fellow survivors allowed me to share things about my mom I had never shared before and heal from all the heaviness of knowing that I knew my mom would kill herself.

That is HEAVY stuff knowing your mother will kill herself as soon as you understand what that means. When you are 10 years old and you fear for your mother’s life, the women who is there to protect you and raise you and keep you safe. When you know she is on the verge of killing herself because she cannot afford to feed you…..you hold those emotions in a place that no one can see. Those emotions stay hidden as your mother discloses the physical, mental and sexual abuse she lived through as a child that makes her emotionally and mentally unstable and because of that trauma she protects you, teaches you, guides you in ways that would be considered unconventional parenting. You don’t blame her for wanting to leave all that behind, for forgetting it forever, and because you sympathize you hold those emotions in a hidden place never to to spoken of. You hold those emotions in a place that no one can see when your mother is being beaten by a man whom she claims she loves and adores and refuses to leave him because of her fear of him and her fear of being alone…because that alone place makes her want to kill herself. You hold those HEAVY emotions deep inside because you are her daughter, you don’t know how to mother her…she should be doing that to you. You have no resources or ideas on how to help her and her emotional and psychological instability. That is heavy stuff we shared in that small room with lots of windows, windows that let us see the world moving outside beyond our grief and eventually we had to leave that room and joined the world to live as survivors.

And so here I am sharing that I am a survivor of suicide, I am LIVING, but living without my mom. My mother committed suicide sometime between March 17-20, 2000. She basically gave me her last will & testament over the phone as I drove in a van to a multi-level marketing conference….and I had not given her grandchildren for her to rock in that rocking chair. I want to prevent this for another person so I am joining the American Foundation For Suicide Prevention for The Overnight. The Overnight is an event where survivors like myself, mental health specialists, researchers, and people struggling with mental illness and crisis situations will walk over 16 miles to show support for one another. I will not only be walking for my mom, I will be walking to help PREVENT suicide and hopefully save someone from being a survivor like me.

When I train over the next five weeks and when I walk through the night of April 25, 2015, I will be focusing on how to spread the word to children like me. Children who might be too young to understand what mental illness is but know that something is not right with their loved ones. I want to help spread the word that those heavy emotions I held inside for so long, need to be shared so that others can hopefully heal and live to see their grandchildren. I want to help the AFSP create programs to help family members know how to address suicide with their loved ones and how to support them so they might live longer knowing their family members. I want to help our veterans, police and medical personnel learn how to process the horrific events  they have seen and experience and heal from it. I want our young adults to learn the tools to survive bullying and social pressures, and choose life before taking their own.

I am a survivor of suicide and I want your support in preventing suicide. I have committed to raise $1000 for the American Foundation for Suicide Prevention. What I want to gain out of walking is to rally around others affected by suicide but also know that I am supporting people like me. If I would have known how to address my mom’s depression and mental illness that lead to her struggles with domestic abuse and unhealthy relationships as well as drug and alcohol abuse, then I might have been able to support her during her darkest hour and given her ways to live longer and see those grandchildren she yearned to see.

This event has passed but you can still donate to support suicide prevention. I would like to invite you to donate to my personal fundraising page. If you would like to join me in The Out of the Darkness Overnight walk, you can create a team or walk as an individual. The amazing part of this walk is that it will be in the evening, overnight. Help me be a beacon of hope and light to those in the darkness that need our help.

The End of March Madness

12 thoughts on “I am a Survivor of Suicide”