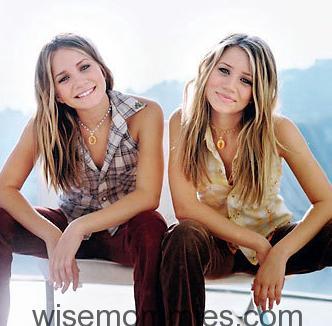 One of the biggest misunderstood facts people have about twins is understanding the whole identical and fraternal aspect. Totally understandable as it is extremely confusing. Most assume that if the twins look alike then they are identical. This is not true. Actually identical twins sometimes don’t look similar.

My own husband has twin cousins. When we found out we were expecting twins, I asked him if his cousins were identical twins. He answered back that of course they were, but he only thought they were since they look so similar. After I explained to him the difference with identical and fraternal he admitted then that he didn’t know what they were.

* One egg, One sperm, act of God splitting the egg into two

* Usually look the same but not always

* Do not have matching DNA

* Can be the same or different genders

* Can look exactly the same or different

The well-known Olsen twins, Mary-Kate and Ashley Olsen, look identical but they are actually fraternal twins.

Although dizygotic twins (fraternal) can look similar, there is a spectrum of how similar and dissimilar they can appear to/from each other

Also a question that seems to be asked to many boy-girl twin is “Are they identical?.” Well, now you know that a boy-girl twin combination can never be identical as they have to be the same gender to actually be identical.

Helping to tell your twins apart