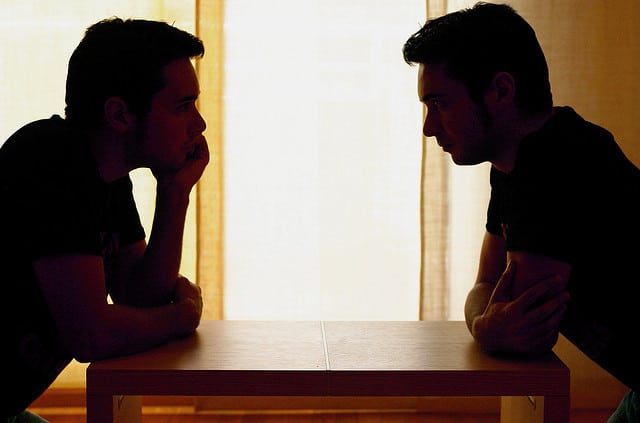 Many people don’t realize twins have emotional, cognitive, and other developments happening completely different compared to singletons. From socializing, peer pressure and more, the journey toward independence while being a twin is very different from that of a singleton. So parents of twins have much more to consider when raising twins or triplets.

As a parent of twins, wouldn’t you love to get into the mind of identical twins for a different perspective of being twins? Well, I have through two identical adult twins, Terri & Pam, whom I met last year via the blogging world. The following is a Q & A and I think their posts are educational with little things to consider, as a parent, in raising twins. Additionally, they answered the questions separately without knowing what one another was answering. They themselves thought it interesting how similar their answers were.

1) To dress alike or not dress alike? Why/why not? Additional thoughts?

Terri: Our mom dressed us alike since birth until we were about 7-ish. I think it was about that time that we started realizing that we wanted to assert our own choices for what we wanted to wear. My opinion is that it’s totally ok to dress twins alike when they’re small. Twins are relatively unique and fun, so why not have fun with it? We got so much attention as little kids because we looked so much alike and dressing alike made us look that much more alike. My mom loved it – and we all know a happy mom is so important.

Pam: For the most part, I think it’s okay to dress twins alike. Twins are a novelty and get a lot of attention. It would also probably save so many questions as to whether or not they are twins or just brothers/sisters. Terri & I would either get the same exact outfits to wear, or they would be the same style but different colors. Neither of us minded at all. It was just part of who we were. Once we started middle school, that’s when it wasn’t ‘cool’ to dress alike anymore. So it was partly us trying to be a little bit different but also partly the fact that we didn’t want to be teased about it.

A) Regarding identification, overall problems with being identified as a unit and if so do you think it was harder for you, and your sister, to discover yourself as an individual?

Terri: Identity issues have always been a “thing” for us. I really think that it’s inevitable to have SOME sort of issue with identity if you grow up with an identical twin – whether people treat you as a “unit” or not. BUT, we definitely WERE treated as a unit and, at times even at the age of 48, we still are. Because we looked so much alike (we don’t look as much alike as we have gotten older), people – even friends – had a hard time telling us apart. So, some people would actually just say “twin, come here!”. Most of the time, though, it was just labeling us as “the twins”. Once you get older and want your own identity that gets old and actually starts to feel a little humiliating.

Pam: Terri was always the dominant twin (still is) and I was more the follower. I was extremely shy & quiet when I wasn’t with Terri. When I was with Terri (and still now) I felt like I could totally be myself. I felt like we could rule the world together. Strength in numbers kind of thing. Our Dad called us ‘Twinnies’ or ‘Twinnie-Pops’. Even when calling one of us, there were times where he just said ‘Twin’. It was just something we were used to. It probably contributed to somewhat of a co-dependent relationship between the two of us. But at the same time, we didn’t mind it. As we grew older, I had to get braces and Terri didn’t. I had also had an allergic reaction to Penicillin and she hadn’t. I wore an allergy necklace and she didn’t. So people would say, “Pam’s the one with the necklace” or “Pam’s the one with the braces”. It didn’t bother me for the most part that we were constantly being compared to each other. As we grew older and got separate cars and even went different directions in our careers, it was definitely an adjustment for both of us. We had always shared a car. When we each got our own car, it took a while to realize that I could leave without her and vice versa. When we both were engaged and she moved about 40 minutes away from me with her fiancé, I cried the first night. My fiancé couldn’t understand why I wasn’t excited to start my new life with him. He just didn’t ‘get’ the twin thing.

b) Do you feel like you and your sister ever got to experience a “I” stage or were you always in a “we” and “us” stage. An “I” stage being periods of time where a child or even teenager leans to distinguish themselves from other people and things surrounding them. Do you feel you ever truly had an “I” stage or do you feel more of a unit style identification that it was always “we-us-them”?

Terri: There were and are definite times that each of us have gotten to experience an “I” stage. Anything that singled one of us out gave that one the opportunity to experience that. For example, growing up, I had some medical issues that my twin didn’t have. So I got extra special attention and felt like it was more about me. In school, we were separated into different classes from kindergarten which I think was the best decision. This allowed us to figure out how to socialize and function in a school setting without depending on our twin. Then, in college, we ended up taking completely different paths with our studies and ultimately with our careers. I’m an Occupational Therapist and Pam has a computer/clerical background. Throughout all of those “I” stages, though, we were and are still very much “we”.

Pam: We always joke that when we talk using ‘we’ as opposed to ‘I’ we sometimes wonder if the person we’re talking to (who doesn’t know we have a twin) thinks we have a split personality. It’s such a habit to talk as ‘we’ and not ‘I’. But as we got older it got easier.

c) Even in adulthood do you find yourself often identifying as “we” instead of “I” in conversations?

Terri: Yes!! Because when you basically share your life experiences with an identical twin, it’s so automatic to talk as “we” and “us”. A lot of times, when I am talking to someone who doesn’t know I have a twin sister, I will say “we are doing this” and then I have to explain that I tend to say “we” because I grew up with a twin sister and I’m referring to her and I.

Pam: Yes. Frequently. Partly because we still do so much together, including our blog.

Terri: I actually think we just went through the normal defining ourselves vs redefining ourselves from each other. We have always been very close, and have always gotten along well (of course we have had our fights). We’ve always wanted the best for each other. I think we kind of naturally became our own unique people with some friends that were separate from our common friends, for example. We sometimes had different jobs and sometimes worked at the same job. We had slightly different tastes in clothes. I tended to be more of a risk-taker with hair styles.

Pam: I don’t think we set out to be different from each other. We just naturally had differences. I liked to wear more provocative clothes when I was a teenager. Trying to be a little sexy. Whereas Terri was more conservative and ‘Mary Sunshine’. That was just the difference in our personalities.

e) Marks in school; if not receiving identical grades/marks in subjects at school, do you feel labels were placed or competition to do better. If you received the same marks, do you feel others labeled you more as being the same?

Terri: I think we were so similar in school-work ability that this wasn’t an issue. At least, I don’t remember being an issue at all.

Pam: We both had our own strengths and our own weaknesses. We both made good grades in school. Terri has always been a little bit more book smart than me. But I’ve been a little more street smart.

f) I’m sure you never really wanted to be apart or estranged from your twin but also had times where you maybe felt the need to be free or less restricted from the burden of twinship. Did you ever feel this way with such opposing ideas and feelings?

Terri: Yes – there were definitely times when I kind of resented always being lumped together as “the twins”. It made us both kind of feel like a “freak show”, and at times it excluded us from things. Like, if one of us could have been chosen by a friend to do something, but that friend was only allowed to choose one person – we’d be excluded because nobody wanted to hurt one of our feelings. As we got older, we definitely got opportunities to be free of twinship since we worked at different jobs, and of course had different boyfriends, etc. When people didn’t know that I had a twin sister, it gave me a chance to just be me. But, then, I love sharing my twin sister with my circle.

Pam: Yes, when I had certain boyfriends that I just wanted to be alone with and not include Terri. Sometimes that was hard because she would just take for granted that wherever I went, she would go too. I distinctly remember a time where I was mean to her and asked her not to go out with my boyfriend and me. I just wanted to have fun without her tagging along.


Stay tuned for more from Terri & Pam as they have answered more questions that I had for them about constant comparison, companionship in life, partner trouble, separation/loss and sharing vs mine. And you can follow their blog, Housewives of Frederick County, which they co-author.

What questions do you have as parent raising twins?

Have you thought about the impact and additional responsibility a parent raising twins vs a singleton might have?

Swimming Safely with Twins and Multiples