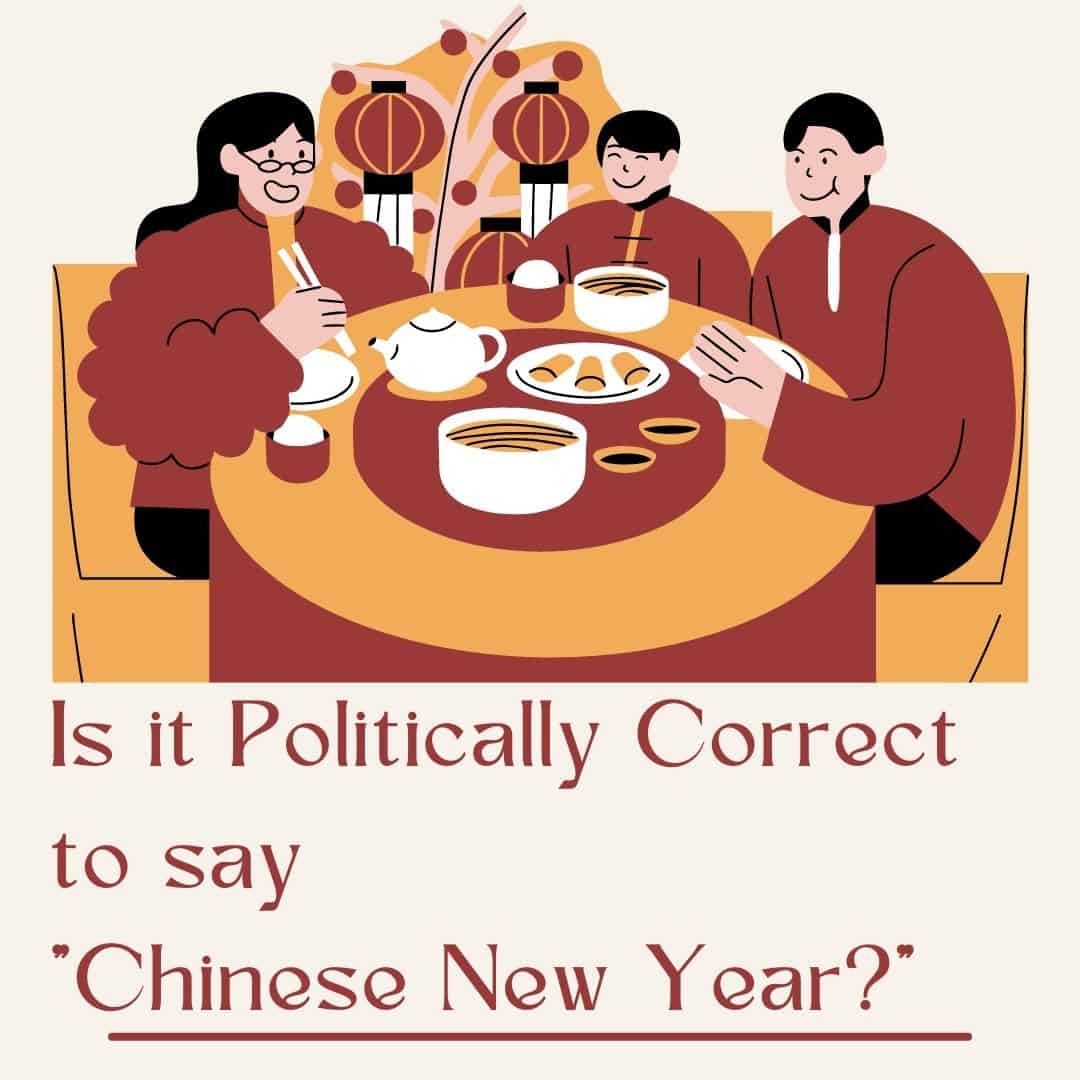 Is it Politically Correct to say Chinese New Year?

There is nothing wrong or offensive with saying Chinese New Year. However, if a person is referring to the New Year Celebrations taking place in all Asian countries or Asian communities throughout the world as “Chinese New Year” then this isn’t correct either. “Chinese New Year” should not be a blanket term used for this celebration.

Should you say Lunar New Year instead of Chinese New Year?

The Chinese New Year is also referred to as the Lunar New Year. However, the Chinese calendar isn’t really a lunar calendar but a lunisolar calendar. Technically, doesn’t that mean that it isn’t a Lunar Festival?

Should you say Spring Festival instead of Chinese New Year?

Even though we have been focusing on the Chinese New Year specifically, we also researched a little into the Korean Seollal. We read: New Clothes for New Year’s Day & Korean Celebrations. All About Korea was our favorite for a Korean Seollal overview and more. We tried deep bows (Sebae) and playing the game Yunnori for a traditional Korean Seollal celebration. .

Is it Politically Correct to say Chinese New Year?

With the intention of being inclusive, what should this holiday and celebration be called?

Whether you call it Chinese New Year, Spring Festival, Vietnamese Tet, Korean Seollal, Tibetan Losar, or Lunar New Year as long as everyone feels included and welcome to celebrate, you are being inclusive.

Traditions and customs vary by country, but amongst all Asian cultures the holiday centers on family. If you know someone who is Asian, and they mention celebrating the New Year, you could simply ask them, “What New Year do you celebrate?” I think, when in doubt, you really can’t go wrong with saying “Spring Festival.“

Solar Calendar (also known as the Gregorian Calendar) is unrelated to the lunar months. The modern Western calendar is a a solar calendar. One solar year is one orbit of the Earth around the sun, about 365 ¼ days. Solstices and equinoxes are usually around the same date every year. Every four years, there is one leap-day added.

Soli-lunar Calendar has extra lunar months. These are called leap months and are added to the calendar. The Chinese and Jewish calendars are soli-lunar calendars. To keep the solar and lunar year somewhat synchronized, around 7 extra months are added every 19 years.

Our family, in addition to the Chinese lunisolar calendar, we are also studying the Chinese sexagenary cycle.

This cycle includes the yin/yang form of the heavenly stems being five elements (wood, fire, earth, metal and water). It also includes the earthly branches which are the rotating list of 12 animals (Chinese Zodiac.

Click here to read more about how we decorate for our Chinese New Year Festival and the Lucky Food we eat.

How to Decorate for Chinese New Year | 9 Easy Ideas

May Day and Maypole Celebration