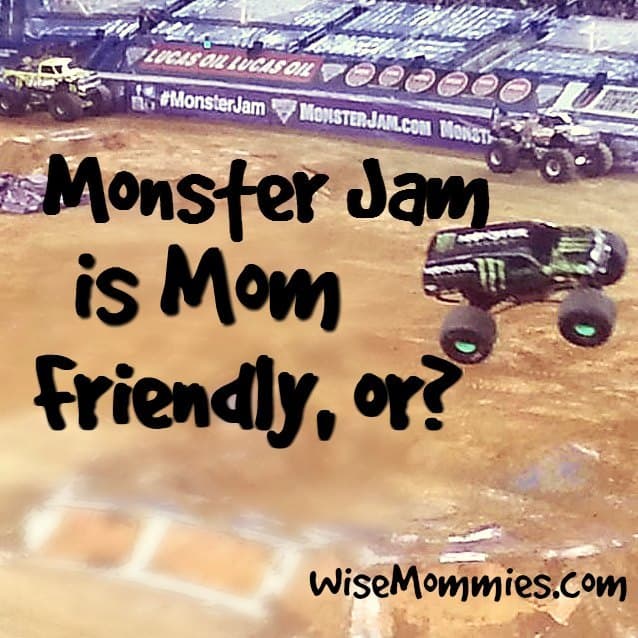 Think Monster Trucks aren’t your thang? I wasn’t so sure myself, but I’m afraid I might be even more of a fan than my son now.

Months ago, I started a reward chart with our son, earning stars for wise choices or wise behavior, and we allowed him the opportunity to choose his reward after a certain number of stars. We thought it strange that he wanted to go to a monster truck show, because he is all about sleek, low-profile cars with speed-you know the,-speed racer-style,-but ok, so I looked online and found a show not too far away from us a month out. That was good timing because it happened to be for Monster Jam which is not just any show, but pretty much “THE” monster truck show to see! This post contains some affiliate links.

The psychological buildup to actually attending the show was tremendous. Of course my son asked all the time how many days until….My husband was traveling, so the experience fell squarely on the shoulders of a boy-heavy mother (3 high-energy boys); I had no idea what to expect for the show.

So basically, I started googling and thankfully, other moms, like me, have commented on their experiences, which helped me prepare for our own personal experience. And, in announcing that I was attending, I had moms coming out of the woodwork stating that they would have attended except for the ambiguously-referred-to stereotypes and intimidation of it being more within a “man’s viewing” and THE sport element held them back. Well, calling ALL women, this sport is mom friendly! MonsterJam Women: Did you know there are several women monstertruck drivers? I wanted to mention the two women drivers for Monster Jam below because I saw one perform at the show and the other reached out to us on Instagram which I think is awesome.

Miceli, is better known as the Queen of Carnage and Madusa (Mad-USA) in the world of Monster Jam. Italian born, Maduse has really worked her way up this world, being raised in several foster homes, worked at Arby’s, then a nurse part-time while she began a career as a wrestler. Now she is breaking all norms, becoming the first woman to ever win a Monster Jam World Finals in 2004 for the freestyle event. Check out Monster Jam and cheer for Madusa if you need an extra womanly push into the sport. Besides becoming a pro-wrestler, truck competing Madusa also owns her own business from doggie bakery to doggie day care. What a great role model for young girls; Girls can do anything! So give her some love and support ladies!

Cynthia Gauthier is French Canadian driving the Monster Mutt Dalmation and is also an off-road racer. Cynthia has a diploma in accounting and enjoys working with numbers. She prefers to be outside on anything from a mountain bike to a dirt bike, and doesn’t have time for TV!!! Her dad, a mechanic, educated her in the real world on engines and everything mechanical. To quote her via Instagram, because I LOVE what she says: “Passion…let me talk about my passion. I developed a strong passion for racing when I was a teenager, but nobody really understood it. My parents, my teachers, and my friends at that time could not understand why I was spending so much energy on my passion. People tried to tell me I was wrong and I needed to have a normal job like everyone else. I had a teacher tell me one day that I would not go far in life. But my determination was way too strong to give up on my passion.” I really love Cynthia’s determination; making her dreams come true despite what others told her. Her advice to others is “If you have a strong passion like I do, do not give up.”

What sport is Monster Jam officially? Well it is sort of two sports in one: Sport #1: As far as I know, monster trucks have not been honored as a true motorsport. If this is factual, then that is disappointing, because after the show, brute-art-performance-of-motor-agility actually, that I saw, I would say that it should be in the true honoring league of motorsports. Sport #2: The sport of people watching at the monster truck shows is a sport within itself…I saw people from all walks of life, seriously, and that was quite entertaining!!

Additionally, I really love the feeling that baseball games and truck shows bring out as an American, and missed this country patriotism when living overseas as an American. And besides baseball, what is more American than suped-up trucks, a woman driver, hot dogs, watered down beer, and Americans wearing shirts that say “All American,” trucker hats with American flags and getting amped up as the bombastic show ends with over-the-top fireworks.

To Pit or Not to Pit? My son has just turned five. With the time it took us to drive, get seated, watch the show, leave, and drive home, our MonsterJam venture took us 7 hours. Mind you, we spent two hours in traffic. I really wanted my son to have the pit experience where he could see these amazing trucks and drivers up close, but being our first show, him so young, and the intimidation of being a mom by myself attending, I wasn’t sure if I could reasonably expect him to enjoy or last through the whole show. As you can see via some of my pictures in this post, we were one of the last families to leave the show. I think that says it all!! The next time we attend I would like to pit…To meet the drivers, look at the cars, just to stand next to the trucks, an honor and experience beyond words. While I didn’t attend the pit this time, you can tell that the drivers are extremely approachable and will spend some time talking with kids, taking pictures and signing autographs. You could tell this already as most drivers took the time to go into the audience to connect and give parts of their trucks lost in competition to kids or talk into the microphone and make eye contact to all via screens.

Already, some of my Instagram photos have been liked by Bari Musawwir the driver of the Zombie Truck and Cynthia Gauthier as mentioned above. I can’t believe they took the time to like my photos and make personal contact with a fan. How rewarding to be able to get so close and personal with the professionals of a sport? How often does that get to happen? Tip: If you do pit, bring something that all the drivers can sign to take home as a keepsake.

Safety for Children Safety Concern #1: Hearing protection should be a must! I bought Firth Kidphones Isolations Headphones. They were extremely comfortable for my son and fit perfectly on his head.

Safety Concern #2: At first I was a bit concerned about getting seats too close to the arena floor, as I had wondered if debris knocked loose from trucks could be propelled into the stands. Well, precautions for this are made as every arena gauges different placements of the stands, where fans sit, respective to the performance ground. Additionally, safety barriers between the performance ground and the audience are often added and seats closest to the arena floor are kept empty. I bought tickets 3 balconies away from the arena. If I had it to do over, I would have bought tickets 1 balcony away as the helicopter mom in me still likes the idea of having one balcony added between my son and the arena. However, I never saw debris flying very far from the actual trucks and feel the shows are designed carefully to be very safe.

Monster Truck Show Lingo/Facts that I learned (very limited mind you as I was a first timer): Freestyle event: Trucks are free to select their own course, obstacles and show-offs from donuts and wheel stands to jumps and back flips. The back flips are amazing!! The donuts are amazing…..I was amazed by the talent and performance from the drivers and everything they were able to do with their trucks. It was like Monster Truck Cirque Du Soleil. MTRA is Monster Truck Racing Association The trucks have 1500 horsepower ISP is Innovative Safety Products and they custom make seats for drivers using body measurements allowing drivers movability but helping prevent injuries

Have you been to a Monster Truck Show? Have you been to Monster Jam? What was your overall take or what has been or is your favorite Truck? Are there other events that you feel held back from attending by intimidation of not being mom friendly?

How to Tell if You are a Good Mom