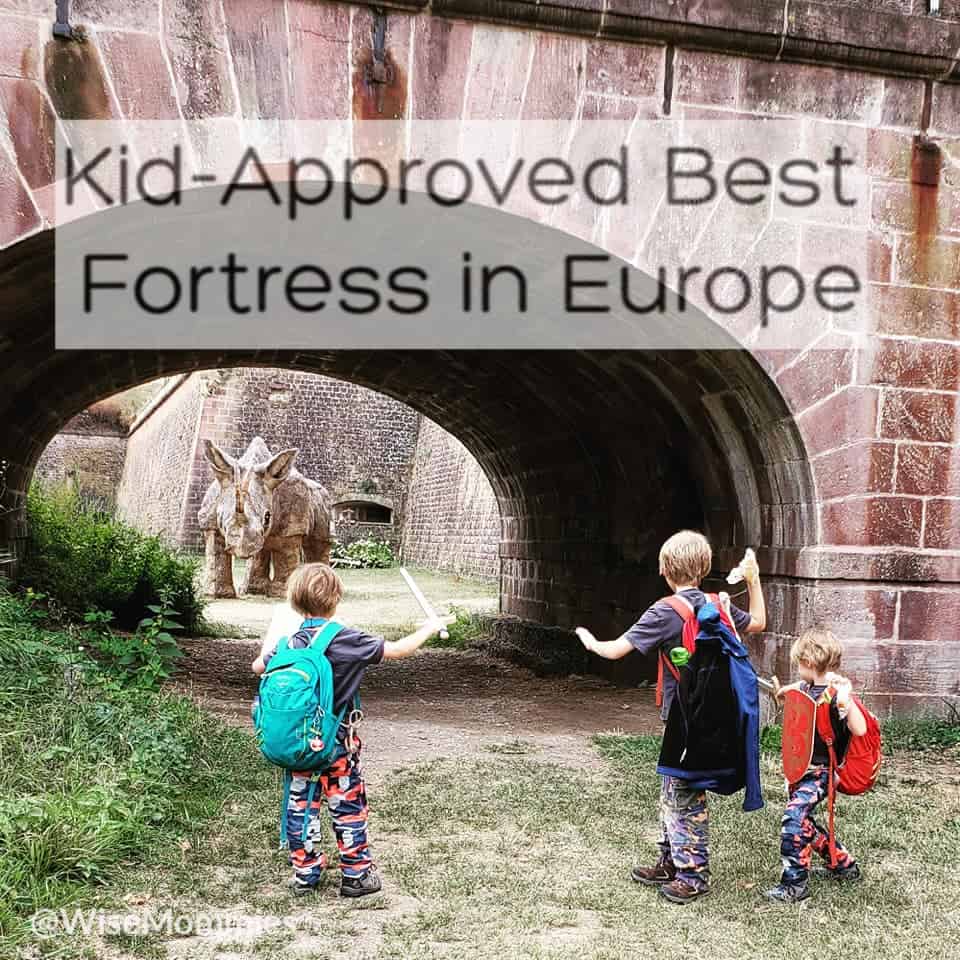 While traveling from Germany into France, we literally passed a fortified structure that caught my attention. I pulled over to explore and 7 hours later, we were walking away exhausted from our fun day of exploring history. Make sure to add this Kid-Approved Best Fortress in Europe to your bucket list! What we had stumbled upon was a UNESCO World Heritage Site, a magnificent Vauban-designed octagonal/star shaped fortified town known as Neuf-Brisach.

Why Neuf-Brisach is our Kid-Approved Best Fortress in Europe:

And Is it Worth a Visit to See the Neuf-Brisach Fortifications for you With or Without Children?

Not everyone is a history buff or fort enthusiastic. However, the Neuf-Brisach fortification is historical, architecturally impressive, touchable, intimidating in size, free to explore, and has strange, awe-inspiring pop-up-art-spots that would be intriguing for most any visitor. The video below shows our amazing adventure. Music in the video by Bensound.

When traveling Europe with my kids, I look for cultural giants that are going to be enriching, yet walkable, and exciting for my kids. Especially since I have three boys eight and under, who have excessive amounts of energy and a need to move. I like to visit places that incorporate hands-on learning opportunities while also teaching them historically, architecturally, and culturally. The Neuf-Brisach fortification was the perfect cultural giant to visit to incorporate all these elements making it our Kid-Approved Best Fortress in Europe to Explore with Kids.

Fortnite is currently one of the most popular online video games. I can see the draw to such games, but nothing can compare with the opportunity for real-life role-playing and imagination. I loved having this day alone with my boys to explore this fort and creating our own realm of fortnite heaven.

In the video above, you can see how my boys enjoyed role-playing, carrying their weapons aka crossbow, shields, and swords around with them ready to fight or defend our family but most importantly their queen (that’s me) at any moment.

There were underground and abandoned tunnels which led to other parts of the fortifications such as the Secret Garden.

At the very end of the video above, I show a preview for the next video and post which will include all of the tunnels and bunkers which we explored.

To get through our abandoned fortress, we knew that at any moment a sleeping dragon or evil queen could appear around a corner or at the end of a dark tunnel.

We were not disappointed. You can see in our video that we indeed came across a dragon, a questionable tea party, gnomes up to no good, eyes in the fortress wall watching us, and other unusual and unsuspecting discoveries during our fortress walk.

There were four huge animals within the fortifications for the boys to pretend to attack, protecting the queen and the fortress. A rhinoceros, bear, elephant and a lion.

My oldest son also enjoyed capturing and playing with a few French lizards and insects along the way.

About four hours into our non-stop walking, my boys were physically getting tired, especially since they were carrying heavy weapons in addition to their water and raincoats. However, we continuously had fort obstacles and other random distractions that kept us all motivated in continuous exploration.

This is exactly what happened to us. Even though we became tired from walking for hours, we stayed in a daze of awe, fascination, and confusion; obstacles that kept us engaged as we continued walking.

“consisting of ravelins, counterguards, hornworks, second covered ways,” and other obstacles placed within the fortifications which were constructed to be like “extra layers of an onion peeled away slowly by the 17th-century besieging army.” “Attackers would be tricked and forced into spending a longer time to move forward, prolonging the time needed to complete the siege.”

Paddy Griffith explains the detour trickery of this fortification in his book:  Vauban’s defense

As if finding our way through the maze of the fortifications wasn’t entertaining enough, every now and then we would come upon a random distraction such as pop-up-art-spots.

And you know the art is cool when even young boys are impressed and entertained.

The pop-up art spots were really cool. When I think of art and artsy, I think of France and French people and the pop-up-art in this fortification supported those ideologies.

There was also a huge ship and my boys played on for nearly 30 minutes. It was in front of one of the city gates where a drawbridge would most likely have been in the past.

This is an old sign for the fortress. While walking the fortifications, we crossed paths with one small tour group and a few couples.

Otherwise, we practically had the fortifications to ourselves, feeling as if they were virtually deserted. We got to be as free and silly as we wanted.

Of course, depending on what time of the year one was to visit the fortifications, there might be more tourists? We visited them in early September.

Best Fortress in Europe, Getting There and Away:

There is no railway station at Neuf-Brisach, but the SNCF operates buses from the Colmar station (the Volgelsheim bus). We parked, for free, in the village contained within the fortress walls. The village inside the fortifications was very quiet and felt almost deserted as well.

The looks on their faces when they first took in the fortress said so much…architecturally impressive & intimidating in size!

We also walked around the village for a little bit but after spending the whole day, 7 hrs, walking around the fortress, we basically just ran out of time, and physical energy for more walking.

Vauban (1633-1707) was a French military engineer who is historically well-known for not only breaking through fortifications but designing and rebuilding fortifications for several cities. As he recreated fortifications, he modified a first, second and then third system of fortifications. The “third system” was the Neuf-Brisach fortress. This post shows pictures of all these dynamics and further information and links to read more about this three-system fortification.

Additional Pictures in the Video for Kid-Approved Best Fortress in Europe Show:

What Forts Have You Explored That You Would Recommend?

We had so much fun spending the day, walking the fortress. Have you been to the Neuf-Brisach fort? Do you have a favorite fort that you have explored? If so, which one and why? Remember to follow WiseMommies as I continue to publish posts from our other adventures in France as well as Germany and other European countries.