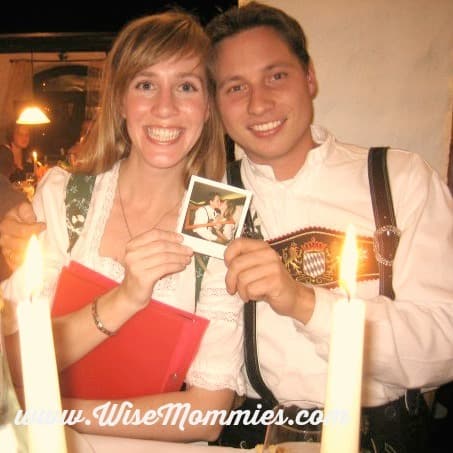 You Know You are Married to a German When:

1) You‘ve had many serious discussions and arguments about bread:
Apparently, bread is so healthy; it’s enough to sustain life for children and adults. It’s practically all one needs to eat for breakfast, lunch, and dinner. However, not just any bread will suffice; it must be German made bread.

2) Kaffee und Kuchen is taken very seriously. VERY seriously:
For special occasions such as birthdays, weddings, graduation celebrations or holidays, one makes a homemade, absolutely has to be made from scratch, cake. And everyone, family members, friends, must stop whatever else they are doing, usually around 4pm on Sunday, and sit around a table together, being still, together, and having cake (Kuchen) with coffee (Kaffee). My boys love this tradition. I mean who doesn’t want to have dessert before dinner?

3) You know to designate a driver:
Germans do not drink and drive. In Germany, if you get pulled over and you’ve had too much to drink, you will lose your license, be fined and will have a restriction on your license to drive. Even though the laws on the books for drunk driving are harsher in the US than in Germany, they are much more enforced with routine random police controls in Germany.
Germans are fantastic with designating drivers, spending the night at a friend’s home, taking shuttles, or having parents, siblings or friends pick up. When it comes to drinking and driving, Germans don’t.

4) You know how deadly a draft can be; Drafts will make you ILL:
Never ever ever EVER turn a fan on, or allow any sort of draft in a house because everyone will get sick mentally and physically and possibly die.
I’m being a bit dramatic but this is how dramatic I feel Germans are when it comes to drafts.
Es Zieht! Es Zieht!! Es Zieht!!!

5) You’ve had an Itsy Bitsy Teenie Weenie talk:
Yes, you’ve talked about speedos, being naked in public, and shorts being too short, tight or small. Even the largest, oldest, hairiest German man, or woman, will sport an itsy bitsy teenie weenie speedo, bathing suit, or pure birthday suit (Adamskostüm) poolside, park, lakes, streams, yards, beach, you name it. The more South or East you go in Germany, the more this seems to happen, and the less they seem able to come up with cloth to cover their nether regions. The best is when they are also wearing socks and shoes whilst naked or sporting that itsy bitsy wear.

6) You’ve learned how to interpret tepid responses which are the norm:

You also have to learn how to interpret their nonverbal communication via body language. This is how one shall interpret an “Oh, ya?” (No way, I’m not doing that) from an “Oh ya?” (No way, that’s crazy, I can’t believe it.)
They do lots of shoulder shrugging and something that looks like an air kiss. The amount of air that escapes their lips whether in short bursts or a long exhale has different meanings. Also the way they shoulder shrug communicates different feelings and meanings.

7) You celebrate Saint Nikolaus and know all about Krampus:
December 6, Saint Nikolaus and a friend of the Devil (Krampus) visits your house. Every night before December 6th, we put a pair of shoes or boots outside. Saint Nikolaus then fills them with lots of sweets. Many Germans do not like St. Nikolaus as it used to be that the Krampus would visit with him, or on the 5th, and scare the kids or fill their shoes with awful items such as sticks for switches or coal.

Krampus is making a comeback in Germany and becoming known in other countries; read more via my Krampus posts.

8) You watch soccer year-round:
There is always a soccer game to watch. Bundesliga, European Cups (Champions League and Euroleague), to national team competitions such as the World Cup, European Cup, and the qualification rounds, even Copa America and Africa Cup.

9) You know that work stays at work:
When you leave work, you leave work. You do not bring work home. At home, one should do wellness whether just having time to oneself, doing some fitness or spending time with a loved one and family, but one does not continue to check work emails, make calls for work or be on call for work. This was one of the biggest complaints from my German students and clients when working for an American company in Germany when they were expected to be more on call for work.

10) You feel so inadequate with your table-manners:
Germans are so well-mannered when eating. This is specifically in comparison to Americans. Germans’ style of eating, “hidden handle,” knife and fork are both held with the handle canceled in palms.

Germans, unlike Americans, do not cut-and-switch but keep their fork in their left hand and knife in their right hand throughout the meal, never switching. You’ll almost never, if ever, see a German use their hands to eat food. For example, Americans will eat pizza and fries with their hands but Germans use a fork and knife, hidden handle style, not their hands. I’ve even seen Germans eat a hamburger with a fork and knife!

Of note, the following generalization applies to being married to a German man or woman in Germany. If a German, moves to the US or another country, out of their own desire, then their mindset and goals in life and therefore personality are going to be different, changed, and changing compared to a German who was born, raised and living in Germany…or never thought of leaving Germany.

Are YOU married to or dating a German? What can you add to this list?

Forget the Bogeyman, RUN from Krampus!