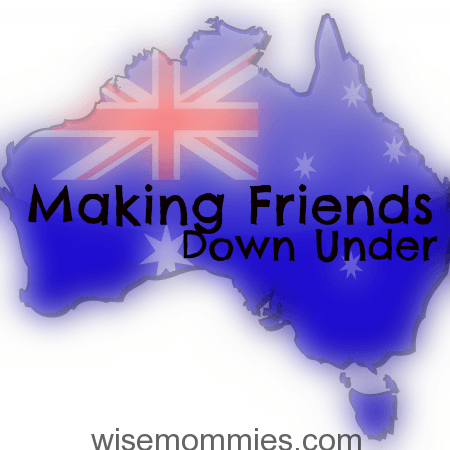 To commemorate Australia Day we asked Maggie to guest blog about her experience moving to Australia and meeting new mommy friends.

After my husband’s job moved us around the United States for years, we were thrilled to get the opportunity to live overseas. We excitedly began packing and researching our new destination, Australia! Our bucket list overflowed with daydreams of dives in the Great Barrier Reef, excursions to the outback, and weekend trips to great Australian cities and wineries. And then came some (sort of) unexpected (but welcome) news. We were expecting our first child! Finding no reason to refuse the relocation, we simply adjusted our bucket list and repacked (just a tad!).

Scuba gear – out. Jogging stroller – in.

We quickly filled up our allocated cargo shipment with baby gear. Does one child REALLY need all this stuff?! (My budget conscience hubby gave the thumbs up to BUY IT ALL before we left because, at the time, it would cost twice as much in Australia).

We had not rushed into parenthood by any means. I was going to be 35-years old when our baby (girl!) would be born. I remember smirking at the “advanced maternal age” stamp that had been branded on the top of all of my charts that I had picked up from my US doctor. We arrived in Adelaide, Australia when I was 12 weeks pregnant. I was in the US for all of my first trimester doctor’s exams (with several weigh-ins), ultrasounds and morning (all day) sickness. After reaching out to friends (actually a string of a friend of a friend of a friend) that knew someone living in Adelaide, I took up their recommendation for a doctor and hospital.

Honestly, that was only one notch above opening the phone book and randomly calling the first doctor I pointed to, but I felt better knowing that someone recommended her. Thankfully, as it turned out, I loved my doctor and hospital. And not only because when I went in for my first appointment (at 16 weeks), she neither weighed me nor blinked at my age (and 4 nights was considered a normal stay in hospital after delivery!). Apparently it is much more of an American standard of practice to weigh a ballooning pregnant women each and every time she steps into a doctor’s office and then send them on their way less than 48 hours after bringing a tiny person into this world.

This was not our first move to a new city. In fact, we had moved something like 5 times in 9 years. We had learned that you can make home anywhere! But it was still hard to start over, AGAIN. This time, not only was it a new city, a new country, but I didn’t know a soul and I was expecting my first child. All you wisemommies out there know that alone can be terrifying business, even with a smooth and healthy pregnancy. Since I couldn’t pack up my friends and take them with me, I better find some ones, quickly.

Among the amazing pre- and postnatal education I received was an Intro to Breastfeeding class. This class was most memorable to me, not because of the obvious information provided, but because there is where I met my first Australian friend. I arrived solo (my husband was relieved that I thought it was no big deal to attend this class by myself) and immediately locked eyes with the ONLY other unaccompanied women in the room. Apparently, we two were the only ladies that had not pulled the pregnant card to drag our partners along (I personally was saving my card for the elusive midnight ice cream cravings I had heard so much about). We shared a relieved smile and mutually sat next to each other without speaking a word. After a very informative (enough to make your boobs hurt just thinking about it) class, I thrust a crumpled (and embarrassingly sweaty) scrap of paper with my phone number and email into her hands as we introduced ourselves. I had been plotting for two hours, working up the courage to just say “Hi, I’m Maggie. Want to be my friend?”

Thankfully she said yes! At that moment, I gained a new found respect for awkward 17-year old boys with a crush, so to speak. I also gained my first Australian friend! But more crucially, a belly bump sister, a kindred spirit of swollen ankles. We began chatting and haven’t stopped since. We met often to share woes of our changing bodies and to pick each other’s brains about baby names and nursery décor. After our baby girls we born, just 3 weeks apart, we continued to meet for tummy time and coffee dates. Now, more than three years later, we swap photos of our (might be mistaken for sisters) daughters and ironically enough, second born baby boys (3 months apart in age).

We LOVE our evening concerts with friends and family!!

2 thoughts on “Making Friends Down Under”