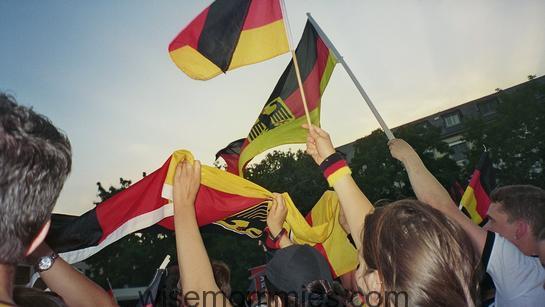 Marrying a German Series: Part 3 : FIFA World Cup Facts!
Go Deutschland!!!! Go Germany!!! World Cup is going on and, as a matter of fact, Germany is playing Ghana today, 6/21/14, and USA is playing Portugal tomorrow, 6/22/14, and our house is full of excitement.

What do you call it? Soccer or football? Our family uses the German word, Fußball. What does FIFA even mean and what does it stand for?

I would really like to see two teams do well this year:
Germany because I’m tied to that team forever having married a German who is a devout Fußball fan and having had our wedding during the World Cup in Germany.

Also USA, because I’m also tied to that team as an American at heart, but especially this year because the coach is a well-known German, and back in 1994 when the World Cup was hosted in the US, I got to be a part of the soccer organization and initially caught the soccer bug.

Even from my time of living in Ireland, and residing right next to the popular Croke Park, 3rd largest stadium in all of Europe, via capacity, I followed and supported Irish football(soccer).

I love the joke that many of German students, at that time, would say is that FIFA meant Forget Irish Football Altogether!

If you are following the World Cup this year, here are some FIFA facts to get you more informed on the biggest, and most watched, sporting competition in the world.

1) The FIFA World Cup takes place every 4 years, and only during WWII, 1942 & 1946, were games not held. First World Cup: 1930
2) FIFA stands for: Fédération Internationale de Football Association
3) FIFA’s objective is to help bring the world together, educate soccer to the world, and build a better future through the game and tournaments played.
4) Out of 19 World Cup tournaments thus far:
Brazil has won 5x
Italy 4x
Germany 3x
Argentina and Uruguay 2x
France, Spain, England 1x

Hands down, Soccer is the most watched, fan supported, revenue-generated, played the most throughout the world, exciting to follow, sports in the world. According to Sporteology and top end sports, soccer has over 3.3 billion fans following, is played by 250 million players and the 2006 World Cup in Germany had the greatest following.
Sorry followers of American football, American Football only came in 9th as the world’s most popular sport with up to 400 million fans. Click here to see some info about the FIFA World Cup 2012 as well as popular songs following the World Cup.

Currently Brazil is hosting the FIFA World Cup. In 2018 it will be hosted in Russia and in Qatar in 2022.

Are you watching the World Cup? What team(s) are you following and hoping to win and why? What’s your next favorite sport to follow and or watch?