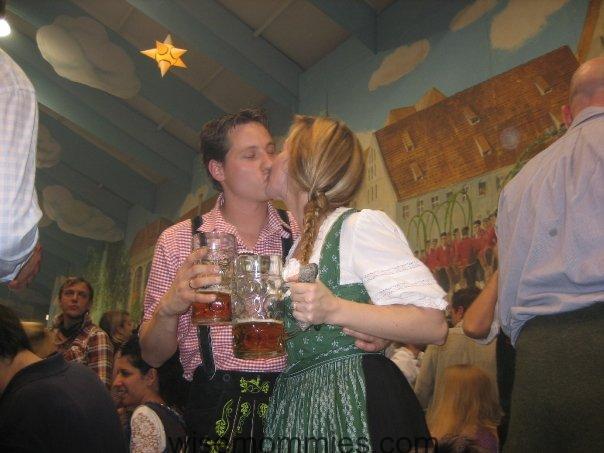 Marrying a German Series Part 1: Falling in love, when you knew?
My husband, Ferdinand, and I met when I was living in Scotland but traveling through Germany. It was a brief encounter via a Christmas market followed by another brief encounter at a beerhouse where he then walked my brother and me to the bus we were traveling on, and I left Germany, but we stayed in contact via emails.

So how did we fall in love?

How did we make such a long distance relationship work?

What obstacles did we come across during our courtship and marriage?

My first “moment” of falling in love surprise:  After 6 months of communicating via emails and developing a long distance friendship, I made my annual move back to Europe, where I would travel and teach, having the summers free stateside being a teacher. My first stop in Europe was a two week visit with Ferdinand and his family, at their home, in Bavaria, Germany. From there, Ferdinand and I made a road trip to Croatia and Austria (visiting family of his there).

After our time traveling around, I headed up to England and Wales to stay and trek with some other friends, and eventually back down to Germany. After another week in Germany with Ferdinand, he took me to the airport where I would fly back to the US. As I started to leave, Ferdinand grabbed my hand, and said, “don’t go.” As I looked back at him, I saw that he had tears in his eyes and he said again, “please don’t go.”

Even if he hadn’t said a word, the look on his face said everything. I was clueless that he had developed such strong feelings for me, and it was the first moment that I thought, “do I like this guy more than friends?” He watched me pass through passport control and up the escalator. As I looked back at him, escalating away, tears in his eyes, focusing intensely on my face, I felt something deep inside me turn and thought, whoa, what was that?

MY “MOMENT” of falling in love surprise:
One month later, I flew back to Germany to stay and attend Oktoberfest with Ferdinand. When he picked me up he made the most romantic gesture….
*As friends, when trying to explain American fraternities and their traditions to Ferdinand, I had told a story of how Kappa Alphas sometimes show a romantic gesture of finding a girl special by giving her a yellow rose and calling her their yellow rose of Texas and how sweet I found this.

Going back, he made the most romantic gesture….When Ferdinand picked me up from the Airport and took me to his extremely small German car, where he had to fold me in with my luggage. After hooking my seat belt, I turned to see Ferdinand holding a yellow rose and then this man, whose English was quite fractured, at that time, proceeded to sing the WHOLE Yellow Rose of Texas song while filling in my name throughout the song.

I was shocked that he had not only memorized and practiced singing this whole song (it’s not a short song) but had taken the chance on making such a romantic gesture and singing it, he’s not really a singer, and that he even showed how he listened to all my stories. It was just this amazing moment! As I looked at this man, while he was singing, I had MY moment. I knew and thought “I’m going to marry this man. Him, my heart desires him, God has put us together, I love him.”

Part 2: Marrying a German Series:
Include some quizzes where you can test your knowledge of some German wedding traditions and more!

Do you feel you have had “a moment”, or remember, where/when you just fell in love or knew, without a doubt, that you would marry the person you married? Love the person you love?