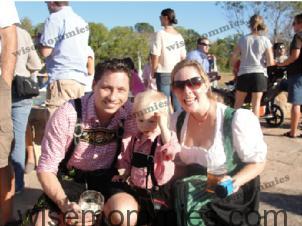 As an American, I only thought of Oktoberfest as being completely touristy. Well, it is touristy, bringing in well over 6+million visitors for the event, every year. It is also the largest beer festival in the world. However, my husband, and other Bavarians take their native Bavarian Oktoberfest very seriously. I learned this quickly when we had to plan the last week of our three week honeymoon cruising around Greece & Turkey reserved for his Oktoberfest festival. We always had a lot of fun dancing, singing, and enjoying Oktoberfest in Munich. This festival can never truly be replicated anywhere else!

Another thing we miss, living where we did in Germany, is being able to walk to the many festivals year round. However, much to our delight, Oktoberfest in Dallas, Town Center, was held within walking distance to us. We got to walk to the Oktoberfest….Well now that is even better than our previous 40 minute train ride in Germany.

We were an international group of friends consisting of Germans, Americans, Polish, French, and Romanian that enjoyed the Lake Highlands Oktoberfest.

For an October festival, it was considerably warmer compared to the actual temperatures in Germany for Oktoberfest.

We missed the hugely, themed and decorated tents in Munich but it was sort of nice having the festival outdoors as well!

The band was authentic, food tasty, and companions more than worthyJ Above all, our son got to wear his lederhosen for the first time…thank you, Vielen Dank Oma Ingrid! Oma, er war der Hingucker!

OHIO to be more efficient with your time

Picky Eaters: Born or Made?