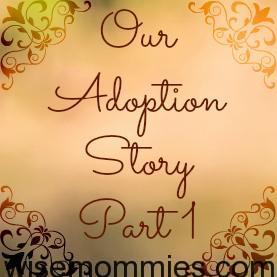 Our adoption story starts years before we heard about or brought our son home. It started because I always felt like I wanted to adopt. So when my husband and I were dating and discussing the future, I made sure that our future included adoption….and our future did include adoption, just not the way I planned.

I wanted to have my own biological children then adopt a child. I imagined I would adopt a toddler when my kids were in elementary school. As we progressed throughout marriage and made memories and started to encounter some losses and struggles we knew that adoption might be closer than we thought. We gave ourselves three years to welcome our own biological child before moving into adoption. That timeline grew closer and we knew we needed to start the process of growing our family through adoption.

When we looked at adoption we were all over the place, we first looked into international adoption in a Spanish speaking country because my husband is Mexican. We then wanted Mexican adoption and finally decided private, closed adoption based on various factors including finances, timing and ease of adoption. I looked at so many domestic adoption agencies in the area, mostly the big ones because those are all you hear about. Unfortunately, we didn’t feel we needed to spend thousands and thousands of dollars to adopt a child. I couldn’t understand what our income had anything to do with our desire to bring a child into our home. I was frustrated and it was the holidays and still, we had no special news to announce and no baby to celebrate a first Christmas with. I was heartbroken and lost and I just wanted a child to call my own.

I started to look outside of agencies and we attended a CPS sponsored event. The idea of adopting a child from CPS was ideal and scary at the same time. My husband was so scared to bring a newborn home and I just kept thinking there were so many children waiting to be adopted, we could take one or two! During a conversation with our tax lady she mentioned that her niece had just adopted two beautiful children from CPS but through a small private Christian agency. I immediately looked them up and called them. It was like I had found our adoption family. From the first contact, I knew this is the agency that would help us be a forever family. I submitted our paperwork to Covenant Kids in February of 2009.

They encouraged us to attend all the fostering and adoption classes they offered. They had just started their private adoption program and allowed families to “double dip” and be eligible for both private and CPS adoptions. This is usually not the case with most agencies and we jumped on the chance. In the end we became foster parents who were also on a waiting list for private adoption.

In August 2009 we went LIVE as foster parents, it was so scary as we waited for a placement. Two weeks later they called us and we became foster parents to two brothers who had not grown up around each other. They showed us more about love and grace than anything we have ever experience before. They grew in so many ways living with us, and we did too but when the time was right they moved onto their forever family on February 17, 2010.

My husband and I decided to take our name off the foster parent list for a while. We needed time to heal from the experience and figure out what we wanted going forward. We learned to move on with a life without children, and it seemed empty but familiar. We found that the void was children and we knew we wanted them, we just were unsure of how.

On the morning of March 19, 2010 (yes one month later) as I was turning on my computer at work I got a call from the agency. It was someone I had never talked to and she asked me if my husband and I were still interested in private adoption in the most angel like voice. I said yes, she then asked a few more questions and told me they had a birth mother who would probably be making a decision soon and that they would submit our family book along with a few more families. She said they didn’t know an exact timeline but would let me know once the birth mother made a decision. I was ecstatic, but apprehensive. My heart leaped out for this woman who was faced with this decision. The reality of the situation hit me full force….she was choosing to give her child away to someone else, a stranger, based on information she reads about in a family book.

I worked at my church and immediately emailed all the priests on staff asking them to pray for this woman. I remember asking them to pray for her decision, her body, her baby, pray for peace for her in making whatever choice she made. All day long I kept her in my mind, I didn’t think about me and my husband, just about her and what an amazing process adoption is and how she must be struggling with it.

That night at home my husband and I were ships passing in the night as I was leaving to go to a book club. At 6:36pm our agency called me, I stopped and looked at my husband, my eyes wide with anticipation and confusion. “Why are they calling me again so soon?” I thought. I answered and the same angel-voice explained to me that a little boy had been born that afternoon and as his birth mother labored she looked through our family book and picked us to be his forever family. My eyes swelled up, my face was red, my throat felt like I couldn’t swallow, I looked at my husband and just shook my head YES, YES, YES!!! She asked me if we could come the next day to meet the birth mother and take our son home. I think I probably asked “Can we come tonight???”. She gave me his stats and the hospital information and I still have the phone bill that I wrote everything down on. I tried to tell my husband things as she was telling them to me, but he kept telling me to just focus on the call. After I hung up, we hugged, and cried and then the circus began.

You know that circus theme song where you can imagine the clowns running around doing things….literally that was the song that played in our house for about five minutes as my husband and I walked in circles talking about who we needed to call, what we needed to buy, how were we going to bring a baby home with the room was still set up with twin beds from the foster boys, etc. CIRCLES, we paced circles around the house, we bumped into each other and realized we needed to get our stuff together and FAST. We called our parents and then I called my book club hostess (who was adopted) to share the news that I wouldn’t be there and why. I felt bad that I couldn’t share the news with all my book club friends directly, but we had less than 12 hours to be at the hospital ready to bring home a baby.

In all honestly, my husband and I love to eat out. We realized we were not going to eat out for a long time, and decided to have a nice meal while planing everything we needed to buy and then go shopping. We tried to enjoy dinner, but the butterflies in our tummies were too much, we just wanted to start shopping and see our baby boy! We headed to the Toys R Us next door and started to shop. I had called a few friends who had older children or were expecting and, of course, no one was answering their phones!! So we stopped people in the store and asked them what we needed. “HI! We are getting a baby TOMORROW! You have a baby with you….what do we need???” Talk about a conversation starter!

In the largest shopping spree I’ve ever had we bought the essentials (carseat, diapers, formulas, bottles, clothes, pack and play) plus some frivolous items not needed at the moment (pee pee tee pee, stuffed animal, baby food????). We loaded the car (almost couldn’t fit everything in!) and headed home to wait. I think that waiting felt longer than all the years and months of waiting before. We both tried to sleep, but it was useless.

We were up early in the morning, stopped at the grocery store to buy some flowers for our birth mother and got to the hospital as soon as we could. We waited in the cafeteria for a few hours and then met the angel-voice woman who had changed our lives forever. She gave us some papers to sign and updated us on what had been going on, and then she said “Are you ready to meet your son?”

These words are words every waiting family wants to hear, and my heart just exploded. THIS WAS THE MOMENT! I was about to be a mom! I looked at my husband, he was about to be a dad! We were about to meet the woman who was going to make this all happen, I felt so unprepared but so ready.

Enjoy the second part of our adoption story here.

The End of March Madness

5 thoughts on “Our Adoption Story Part 1”