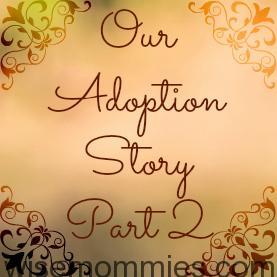 I left off that our case worker had met us in the cafeteria of the hospital that my son was born in. She discussed a few things with us then and asked us if we were ready to meet our son. It was a Saturday morning in March and this had been a whirlwind 12 hours from hearing the words “She picked you to be his forever family!” to the question “Are you ready to meet your son?”

I should stop to say, that conversation was the most anticipated and most revealing of God’s plan for us. There are so many things she told us about our birth mother and our son that makes me realize that God had a plan for us all along. You see, our birth mother and my mother, who died in 2000, share the same name. Our son’s lineage is from the two countries we both love, Mexico and Brazil. He was born early and was small, but strong and alert, just like me when I was born. The birth mother wanted a very open adoption with more letters and visits than we had anticipated. This was something we were not expecting, but immediately we knew that she knew best for our son and we accepted that with open arms.

The walk to the elevator and to their room was probably some of the longest and most emotional steps I’ve taken in my life. I really tried to keep it together, but I really just wanted to yell to every person we walked past…. WE ARE MEETING OUR SON! I held onto the flowers we had hastily bought on the way to the hospital. I mean seriously, what gift do you buy a woman you never met and who is about to give you the child she grew inside of her??? I thought about all the emotions she must be going through and just prayed for her peace and that she knew we would love her son, OUR son with all our heart. I prayed I would say the right things and not trip and drop the baby. I kept squeezing my husband’s hand knowing he knew that I was sending him my prayers and energy, and he was doing the same to me.

We walked in the room and there they were, I immediately felt love and affection for her, and honestly didn’t even see the baby in the cradle next to her. We chatted for a bit then she asked me if I wanted to hold him. That moment that she put him in my arms was surreal. I was holding a child I so hoped would be mine, but in Texas, the law gives the birth mother 48 hours before she can sign any custody papers and once she signs them her parental rights are pretty much terminated. I held him as we shared stories of our families, our histories and our hopes. She said that our family book was on top and that she didn’t even read the rest because she immediately knew we were the ones. She said it helped her as she labored to read and get to know us. That as she drew closer and closer to having our son, she knew more and more we were going to be his parents.

Through a lot of the conversation I just sat there, with this little five pound baby in my arms. He was so hairy! He looked like a little old man and when he made noises it was like a little elephant sound. I don’t even think he even opened his eyes, but man, I looked at him, I studied him and just kept saying prayers of thanksgivings and protection for him. After visiting for a while, we decided she needed some rest before she was discharged and I handed him back to her. I’ll be honest, I was scared to do this, I didn’t want to give him back, but God calmed me and let me know that even if it didn’t work our, our lives were forever changed by meeting this woman.

We found out that our son needed to stay at the hospital for an extra day so we had to leave the hospital without a baby. It was heart wrenching to know, he still wasn’t officially ours and he wasn’t even with us. I already felt a void and wanted to camp outside until we could take him home. But more importantly, I had met a person whom I will admire for the rest of my life. She is strong and courageous and thoughtful in her actions, traits I hope our son will have. As we went home, again I prayed for her to heal from birth and from loss.

That night it snowed. We wrote a message to him in the snow and again, got little sleep. On Sunday we argued over whether to take the baby bag and equipment to church with us. I thought for sure they would not release him until the afternoon and my overly prepared husband put his foot down and said we would take everything. At this point we had shared the news with enough friends that when we walked in, we couldn’t get into church without friends asking us questions and others overhearing what we were discussing and having to start over again. These friends had all cried with us through our losses and prayed for us for so long, it felt so good to share such good news with them.

As service was about to start, my phone rang and it was our agency. The hospital had released the baby and we had to come NOW to pick him up or they would release him to CPS. (This hospital was not the most adoption friendly). I have never seen my husband drive so fast or erratic in my life, but I am thankful he did. We just made it as our social worker arrived and signed all the release forms.

In the case of adoption the custody of a child falls to the agency, not the actual adoptive parents. So technically our social worker, on behalf of our agency, was the person who our son was being released to from the hospital. The nurses had to give her all the discharge instructions, and they were so sweet about making sure that my husband and I were right there to hear them all. We were allowed to touch him to change him and to pray over him and take pictures with him, but they would not let us hold him for much more.

Since we still had to wait for the official 48 hours until the termination of parental rights, we had to stay with our social worker until we met our birth mother at our agencies office. We decided to have an early lunch. It was so weird to have this five pound baby, who I just met, as well as our social worker and her husband (they had also left church to come meet us) and try to carry conversations and eat food, when all I wanted to do was hold him, count his fingers and toes, memorize every little wrinkle and hair on his face.

We went to the agency and his birth mother arrived shortly. She wanted to hold him while she signed the papers. I think this was the most emotional time for me and my husband. She was giving us her child….FOREVER. I am sure she whispered sweet nothings in his ears and cried and took in every wrinkle and hair in his little face. We were bonded in ways only God knew, and this peace came over us all. We hugged and took pictures and shared phone numbers and emails. The amount of contact in a private open adoption is usually not legally binding, but we had said we would update her every 3 months with emails & pictures for the first year and every 6 months after that. We also agreed to do visits every 6 months for the first year then every year after that.

For the first year I was so good about sending updates and messaging with her. I still send her updates (not as stringent as every 6 months) but our last visit was when our son was about to turn two. She always responds to my emails with an update and occasionally I will text her with a photo just to share our life with her. I love hearing about her life and how she following the dreams for her family.

Adoption is a gift for so many. Adoption does change lives. But to us, adoption is a story that developed as our hearts grew and changed. Our family would never have started or be complete without adoption. Within adoption there are so many things that change and so many emotions to be had, but in the end a family is created and I am so thankful our family has been touched by adoption.

November is National Adoption Month, if you would like to discuss more about adoption, please feel free to contact me directly through our contact us page.

2 thoughts on “Our Adoption Story Part 2”