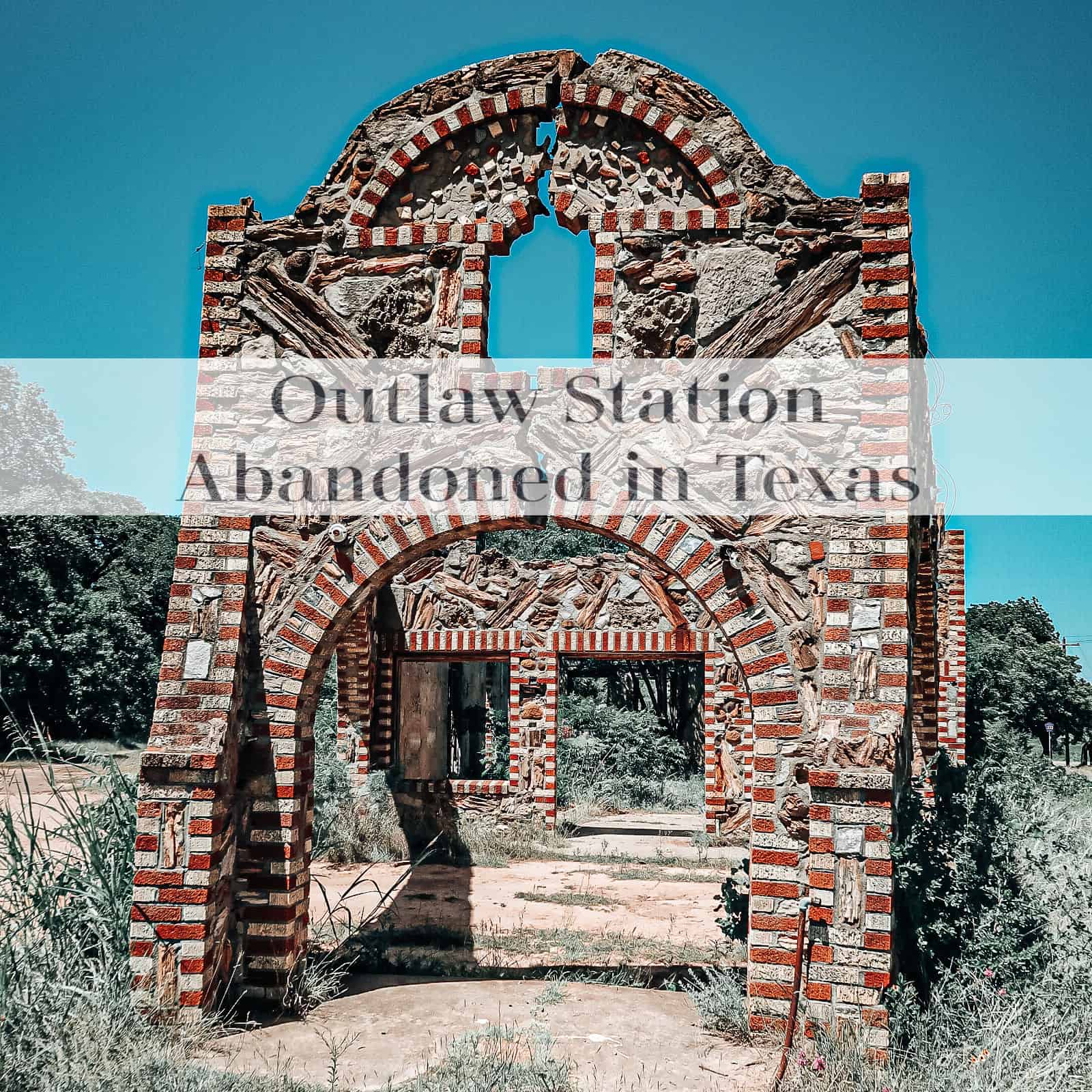 In Glen Rose off of Old US 67, I stopped to show my three young boys this amazing historical gem. This was an astonishing and educational geological road side stop. Also referred to as the Outlaw Service Station, Outlaw Gas Station or just Sycamore Grove, this Outlaw Station in Glen Rose is Astonishing.

Even with a huge crack running down the middle of the structure at the top, it is incredible that this majestic structure is still standing. It’s made from petrified wood and fossilized stones. It’s a historical site of Texas, and structure bears testimony to an era of Texas history that makes for a good story.

For any adventurous traveler, geologist, architect, Texan, or Philomath, this abandoned gem (literally it is a wood-turned-gleaming-stone gem) is an unparalleled visit if you are in Glen Rose. Ok, it is pretty parallel with the dinosaur footprints that you can literally touch but it is distinctively wonderful in its own way. After all, Glen Rose’s petrified wood dates back around 115 million years ago when giant sauropod dinosaurs and theropods were lumbering through this area leaving behind some footprints.

People come from all over the world to see the dinosaur footprints and fossil hunt in Glen Rose. I’m surprised how many visitors aren’t familiar with some of the other Glen Rose gems such as the petrified wood structures.

When Masons created and built structures in Glen Rose, using petrified wood, they often used and combined the wood with additional fossils such as other quartz-petrified organic matter and ammonites.

If you find and look at these buildings, you will discover these extra jewels.

My boys and I spent a long time looking for the different gems, fossils and even the unique colors and texture of the petrified wood.

As a matter of fact, out of my three boys:

Petrified palmwood, “even though it’s actually a mineralized fossil” is the Texas state stone. While some of these historical sites have been vandalized and pieces of petrified wood stolen, especially from the abandoned buildings, petrified wood is a fossil, and it is legally protected in the United States; it is history caught it place.

A Storyteller at Heart and My Boys Love my Stories

After we examined this building like mini-geologists, as we walked around and explored this abandoned outlaw service station, to make it more of a living history exploration, this is the story I told my boys.

Once a service station owned by a man named Ed Young, during Prohibition, he began selling moonshine in addition to his gas. Moonshining is an unlicensed making and selling of whiskey.

While the Texas Rangers were catching outlaws from gunslingers to horse thieves, the beginning of prohibition in the 20th century created a new outlaw known as a bootlegger.

A bootlegger is a person who makes and/or sells something illegally.

Seeing that moonshine was an easy and lucrative business, even being illegal, Mr. Young started selling more moonshine than gas at his station.

You see, when times were hard, instead of choosing to do hard low-paying manual labor, some Texans made the bad choice to become bootleggers. Bootleggers in this area were making and selling “white lightning” which is white whiskey (moonshine) that is white because it was never aged in a barrel. If it’s aged in a barrel then the whiskey turns brown as it picks up charred and uncharred wood pigments.

Glen Rose, before and during prohibition, became known as the “whiskey woods capital of the state” and “moonshine capital of Texas.” And another interesting fact, “Dr. Pepper was a popular additive” to moonshine.  What’s special about Dr. Pepper?

And of course it’s rumored that the infamous Bonnie and Clyde often visited this place. Do you think they came for the gas or the moonshine?

Next to Mr. Young’s gas station was White Rock Roadhouse. This roadhouse was turned into a speakeasy. Sadly, the roadhouse was demolished two years ago.

In the 50’s this Outlaw Gas Station was converted into a grocery store but that also ran its course, closing and leaving this abandoned structure behind.

If only the walls could talk, what history would further be disclosed?

It took me awhile to find this abandoned building.

For my readers, I’ll give you the exact location in hopes that you too will be able to visit and experience this amazing Geological historical gem in Glen Rose, Texas: 1738 CR 312, Glen Rose, Somervell County.

Glen Rose, Texas is an easy day trip from Dallas and Ft. Worth.

We camped, staying for three days and two nights. It is amazing all the educational and adventurous fun that we had as a family. We could have stayed even longer!!

Have you been to Glen Rose, TX? If so, what was your favorite discovery and adventure?