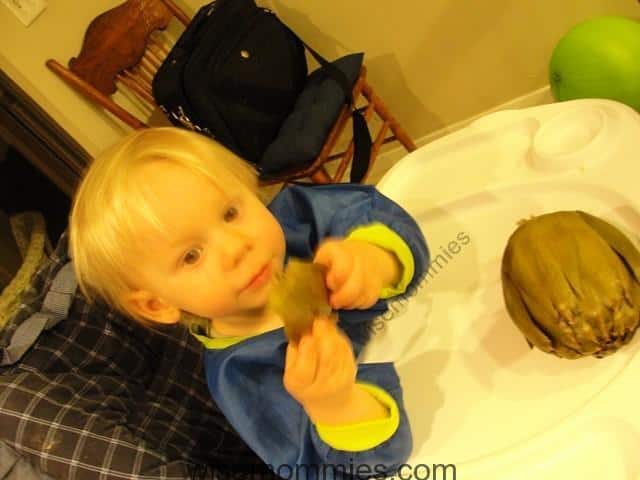 According to Gary Ezzo and Robert Bucknam, On Becoming Pre-Toddlerwise, “Excluding a medical condition, picky eaters are created, not born”  Personally, I believe a little bit of both, born and made, with regard to personality and temperament (of the parent as well as the childJ). I believe that parents create picky eaters (made) but they can also stop a picky eater (born) from being made worse or even created.

Parents can control the environment and understand that even if you think that your child has been born a picky eater, biology is not destiny. Either way, establishing parental guilt will not benefit anyone so let’s discuss solutions/resolutions. The following are clever ideas/tips, that I personally use, for preventing a picky eater. The age I started these hands on tricks with my son is also given.

6 months to present: At 6 months, I gave my child Acorn squash. Before feeding him, I showed him the bowl of squash, had him smell it several times, and talked about the color. I then let him dip his hands into it, feeling the texture, before and while feeding him the squash. I did this with all his food when introducing something new to him.

11 months to present: Gave peas in their pods for my son to take out and eat. He absolutely loves this. It is the food that I always take to restaurants or when I need him to be occupied allowing me to make an important phone call. It takes him at least 20 minutes to eat his peas.

12 months to present: Once my child was eating a certain fruit, I’d give him his bowl of cottage cheese or Greek yogurt for breakfast and let him drop in his own fruit; usually blueberries, mango, papaya, raspberries, or pear.

Make Mealtime Fun: Picky-Pointers (1 year ++)
14 months to present: Hit and pound: Whenever I make a casserole that calls for bread crumbs on top, I put the dry bread or crackers into a baggie, put the baggie on my child’s kitchen table, give him his play hammer and let him hit and pound to make my bread crumbs or pulverized cracker pieces. Click here for examples and recipe

16 months to present: My son loves bananas so as soon as he was able to, I’d let him take and peel his own banana.

17 months to present: Gave grapes on the vine and let him take them off to eat.

18 months to present: Give him an artichoke. He peels the leaves off and eats the ends by himself. Firstly, we did have to teach him how to do this by example as with many other tasks. We also have to cut away the end for him to eat the heart of the artichoke once he finishes with the leaves

19 months to present: At the kitchen sink, I wash off his morning fruit, usually a pear, mango or blueberries. Then I put a bowl of water at his toddler table so he can wash the fruit in his bowl of water. He then brings the fruit to me on a towel when it is clean, or I ask for it. I cut it up, and put it on a plate. He takes it to his highchair where he adds the fruit to his yogurt. *You could also have your child help wash the fruit with you at the kitchen sink and remember to have eveyone wash their hands before and after handling the fruit.

OHIO to be more efficient with your time

4 thoughts on “Picky Eaters: Born or Made?”