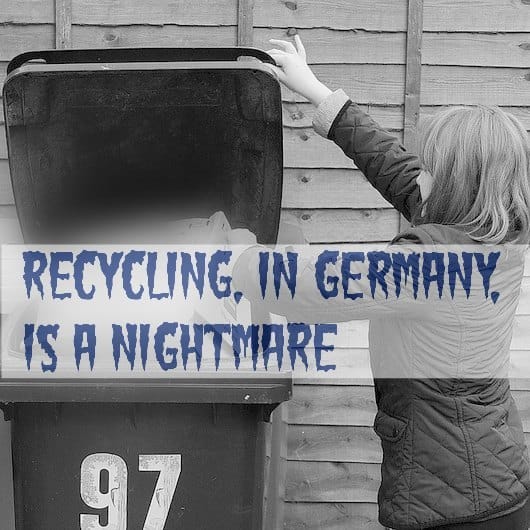 You have to be German to understand (and be able to recycle in) Germany. Actually this is a love-hate relationship for me. I love how Germans recycle but I hate doing it. From receiving a citation to just doing it wrong, it’s been a nightmare for me.

When my husband and I had decided to be exclusive with our relationship, I rented my own flat in Munich to really learn the culture and take a few German classes to begin learning the language. At my flat, there were 15 trash bins, but really just 5 or 6, but really I felt like there were 15? Or there might have been 15?

Recycling instructions on the bins, in German, were not very helpful since I didn’t know any German at that time. These were not picture friendly bins! So I would sneak down to the trash bins at 9 or 10pm at night, when I thought no one would see me, and with my German/English translation dictionary in hand, I would separate my trash. The unsure trash, I would keep aside for my future husband to dissect for the respect bins when he would visit me. I think some places in Germany are starting to color code their trash bins which could help but my trash bins were not color coded.

Then, I got a noise citation because after certain hours and in certain places there are laws against being too loud or making noise. Apparently, my separating clacking & clinking trash while I lurked around tediously separating little bits of refuse was loud enough to get myself fined… even though I thought I was as quiet as a mouse so to not be noticed by anyone. Needless to say, after that, ALL trash got piled up until my boyfriend visited.

Whenever we visited his family, his mother was too impatient at first to repeatedly explain where and how to recycle what so she would just always have me set my trash to the side and would later filter and delineate all the little bits of detritus. Fast forward, a year later, to a more recycle-capable version of myself; I would separate my trash into one of her EIGHT bins. I would still often catch her fixing my separation. Like I said, recycling in Germany is a nightmare.

Recycling in Germany varies from city to city and state to state. You have to be very specific with how you recycle every piece of trash. A lot depends on whether you have trash bins close to where you are living or need to use plastic bags. Every can and bag is color coded to what you are attempting to throw away.

Just to understand a touch of their order to the recycling: There can be up to eight give or take trash bins.
The four basic trash bins(or bags)are:
1) Restmüll=general waste
2) Papier=paper waste
3) Plastik=plastic waste
4) Kompost=organic waste
Depending on where you live in Germany, you use a yellow bin or yellow bag for waste with the green sign “Grüner Punkt”. Cans with paper need to be torn up and separated, compost separated, metal and plastic and certain paper or cotton all separated. And then all separated into the correct color coded bin or bag.

Next you have different bins for all Flaschen(bottles). Containers for glass are separated by colors: white, green, brown bottles and other glasses. Water bottles, juice, and beer bottles are all kept in crates until full and then taken to a Getränkemarkt. You pay extra, as a deposit, for crates and bottles, and if you want your deposit back, then you have to return all empty bottles with crates.

Featured photo credit: Steven Leith via Visual Hunt / CC BY Modifications to the photo via WiseMommies

What to do with stained baby or toddler clothing

Give H&M Your Worn, Torn, and Stained Clothing