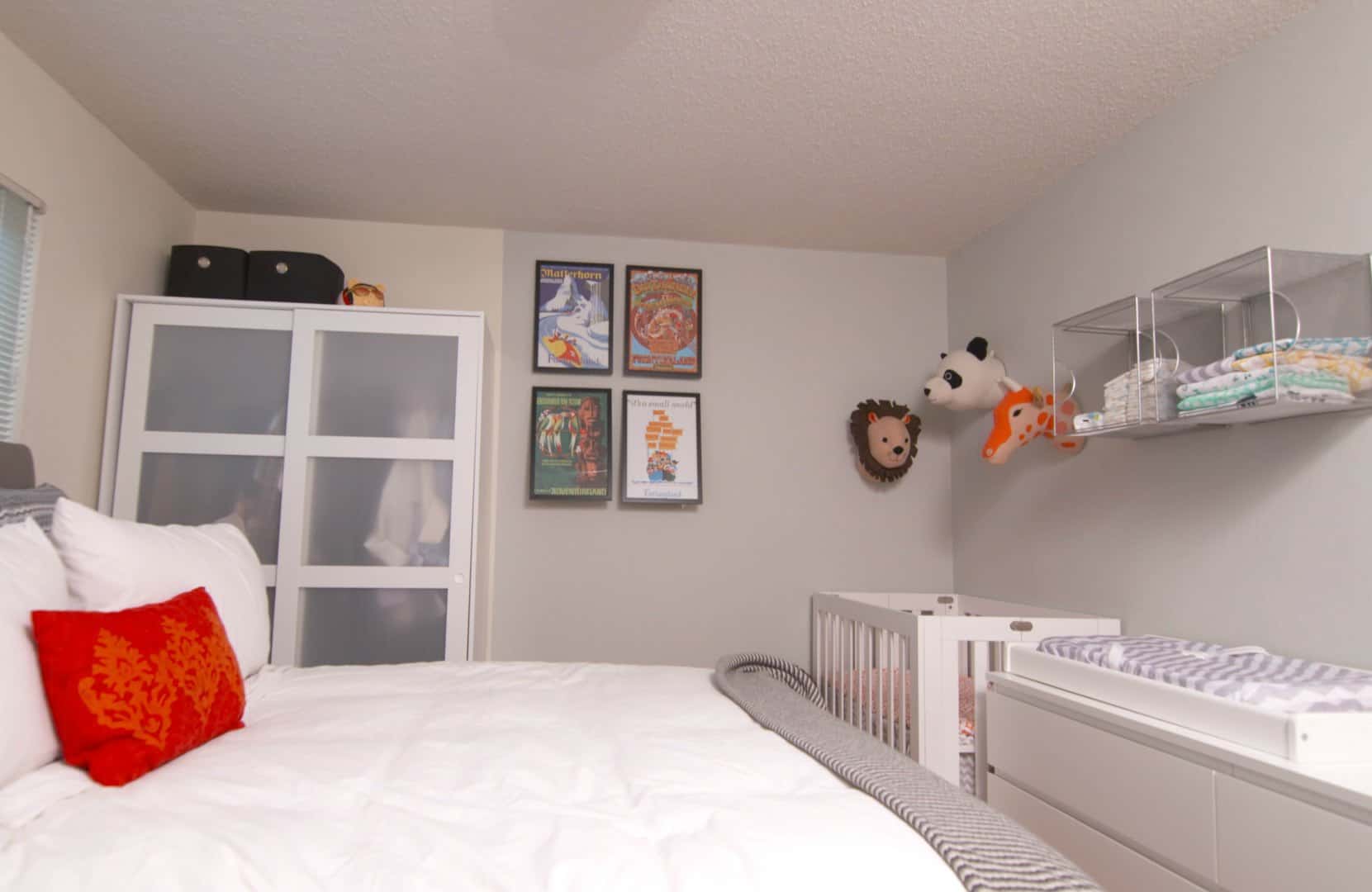 Why Room Sharing Prevents SIDS by 50%? As of lately, 2018, most hospitals are now informing parents that they recommend having their newborn(s) sleep in their room for at least the first six months and up to a year to decrease the risk for Sudden Infant Death Syndrome (SIDS) by as much as 50% and is safer than solitary sleeping (infant in a separate room). This is shocking many Americans who have a beautiful nursery ready to house their newborn soon after arriving home from a hospital. I can understand why many Americans are shocked as this is not the cultural norm, in Westernized cultures such as the US or UK, and these recommendations are being recommended without further explaining how and why they might prevent SIDS. I’m personally surprised that this is just now being discussed more openly, as the American Academy of Pediatrics (AAP) already changed their sleep safe policy back in 2011 but the media didn’t highlight it until 2016. So why are US hospitals just now educating parents about this change? Our supporting doctor’s answer to this following in the next post.

This post discusses: Why Room Sharing Prevents SIDS by 50%, The Nitty-Gritty Should YOU follow These New Guidelines, American’s Misunderstanding of Co-Sleeping, How to Safely Co-Sleep and more.

Unfortunately, one misconception is the real definition of co-sleeping.
Co-sleeping is when an infant or child is sleeping near a caregiver. Room-sharing and bed-sharing are two subsets of co-sleeping. Bed-sharing is usually thought of being synonymous with co-sleeping but if someone co-sleeps that does not necessarily mean that they are bed-sharing.
Room-sharing, a situation in which babies and young children sleep close to one or both parents, as opposed to sleeping apart from parents in a separate room.
Bed-sharing, a situation where babies or young children sleep in the same bed with one or both parents. To be clear, the AAP, 2005 wrote “…bed sharing, as practiced in the United States and other Western countries, is more hazardous than the infant sleeping on a separate sleep surface” and they do not recommend or supporting bed-sharing. If bed-sharing is not practiced safely there is a chance of sudden unexpected infant death (SUID) which is also related to asphyxiation.

In 2011, I published a post, How to Make Co-sleeping Safer (room and bed-sharing) and in other posts, I’ve talked about some benefits of co-sleeping. My husband and I safely co-slept (room-sharing and then bed-sharing) with our singleton and then twins which helped make my ability to breastfeed possible.

Number #1 Cause of Death in Babies
Nobody likes to think about SIDS, but “it is the most common cause of death in babies beyond the newborn period (1), and we want to do everything we can to prevent it.”

Why Co-Sleep Room-Sharing Helps Prevent SIDS:
There have been many case-controlled studies documented and published with research showing that babies are safer if they sleep in the presence of an adult parent/caregiver vs separate room sleeping; “Over the past 15 years studies have found that significantly fewer babies die suddenly from unexplained causes (SIDS) when sleeping in the same room as their parents compared to sleeping alone. This does not mean that room-sharing protects every baby as some deaths still occur during room-sharing, but the proportion is lower. Room-sharing therefore reduces the risk of SIDS in comparison to separate room sleeping.”

Case-control studies in 20 regions in Europe: This case-controlled study states that 36% of SIDS deaths could be prevented if all babies had slept in cots in the same rooms as the parents.

Case-control study in England: Blair et al (2006) found that 75% of the day-time SIDS deaths occurred while babies were alone in a room. Adult supervision, especially during the day, can help assure babies stay in a supine position, and “prevent rolling prone or head covering.” Case-control study in Scotland: Room-sharing recommended

Possible Risk Factors for Separate Room Sleeping:
1) Emotional Stress and Anxiety of Separation
2) Baby might have difficulty and problems to regulate physiologically without proximity to mother’s body: potential problems with temperature, respiration, lack of awakenings, and irregular heartbeat.

Further References to support, Why Room Sharing Prevents SIDS by 50%: The above information about room-sharing vs separate room sleeping is further documented in these case studies and published articles:

Colic and SIDS are Related:
I find this theory that colic and SIDS are related as extremely interesting. My one colicky baby was also the baby that often woke me up at night from gasping breaths. From my own experience, room-sharing enabled me to quickly respond to my child when I noticed this change in his breathing. “Well documented among nonhuman primates, there are physiological regulatory effects that parents assert on their infants when they sleep.”

The Nitty-gritty is Co-Sleeping Right for Your Family:
Let’s be honest, there is not a one size fits all for every family situation. I do not believe there is one superior sleeping arrangement. One must evaluate their own family situation to decide what works best in context for their family. I think a safe sleeping environment is the first concern and more important than the location of the child.

If Co-Sleeping Isn’t Right for My Family, Then Why Should I Care about the Recommendations:
It’s always wise to educate oneself regarding what is being done more broadly in the world as well as safety guidelines recommended via available research. This allows for more open-minded and informed decisions to be practiced.

Our Sleep/SIDS Statement Back in 2011:
Additionally, back in 2011, I talked about other possibilities for SIDS. I wonder if (wish) my post helped the AAP open their mind to co-sleeping? Wink wink!!!
Our statement in 2011: “The Neurologist, who is backing our blog, deals with children through sleep disorders, brain aneurisms, epilepsy, and SIDS. Dr. Kirk is actually part of many other doctors looking into another possibly of SIDS regarding serotonin receptors in the brain stem. If these studies turn out to be factual, then safe co-sleeping could be the biggest benefit to decreasing SIDS. When new facts come out about SIDS and serotonin receptors in the brain stem, remember that you heard it first here!” Interesting that Medical News Today published info about SIDS and serotonin in 2016!!

WiseMommies’ Final Statement:
“People often ask me how a sailor gets any sleep when ocean racing solo. While sleeping, the lone sailor puts the boat on autopilot. Because the sailor is so in tune with his boat, if the wind shifts so that something is not quite right with the boat, the sailor will wake up” Dr. Sears.  Mutual awareness but not a mutual disturbance! Room-sharing and bed-sharing have gifted our family in many ways. We still love our little snuggle bugs now-and-then weekly and for sure every Saturday morning.

The featured pic is from Project Nursery. Their website has the most amazing designs and ideas for “creating a nursery nook in your master bedroom.” Lot’s of wonderful DIY Dream Nursery ideas and working with small spaces. Thank you, Bumps & Babies for the link up!

Are you a Co-sleeping family, bed-sharing or room-sharing? Why or why not?

Crib Sheet Tip/Trick to Save Time and One’s Sanity

5 thoughts on “Why Room Sharing Prevents SIDS by 50%”