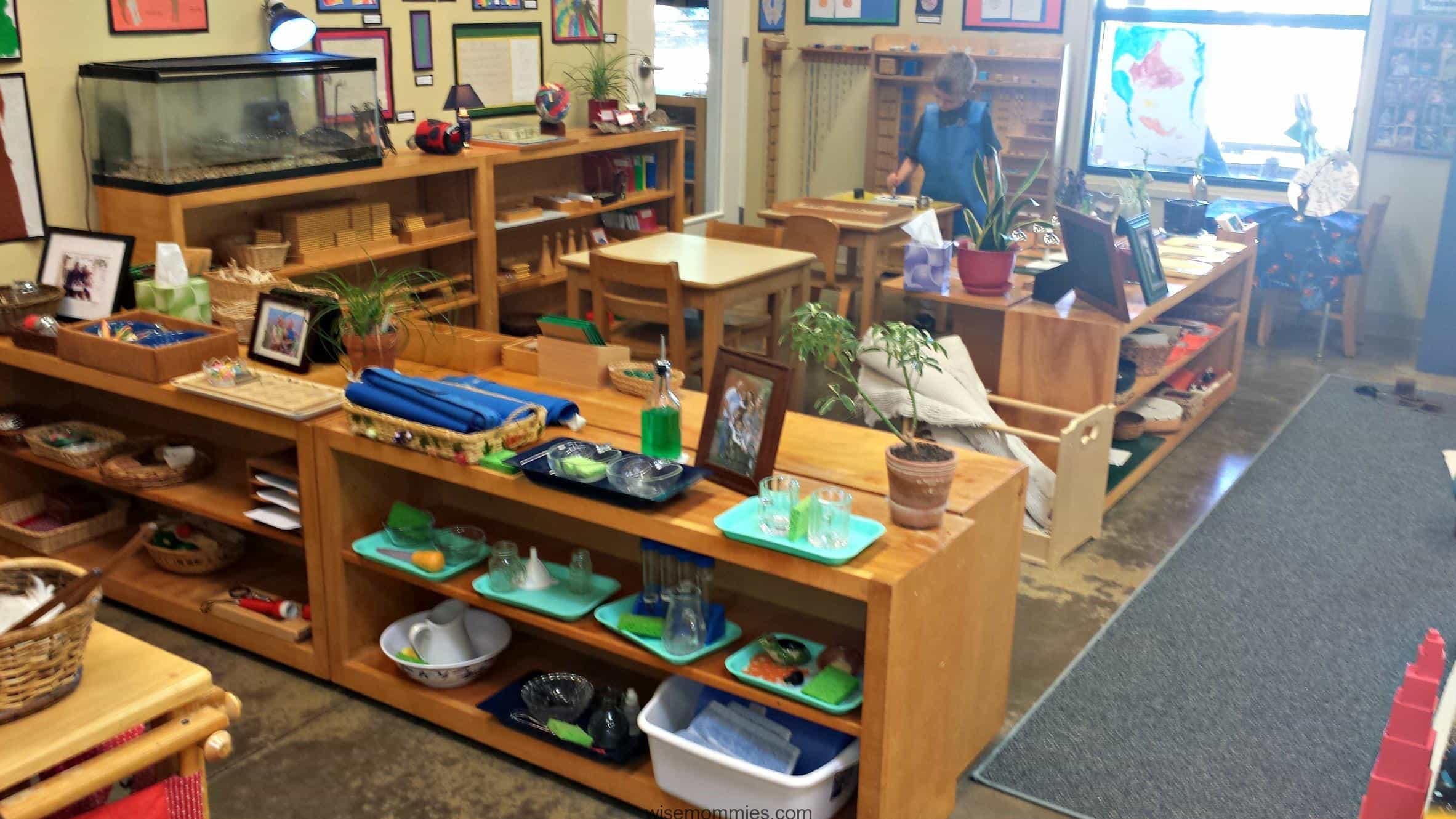 >>>This is my personal review of White Rock Montessori located on Oats Drive based on a tour on April 28. I am not a school expert only a passionate parent who is looking for the right fit for each of my children and our family. I might have gotten a few things incorrect, again, I am human. For more information about White Rock Montessori visit their website.  It will be hard to give a review without comparing my first tour at Westwood Montessori. I hope I can separate the two, however they are very different in many ways, and very familiar in others.<<<

The drive to White Rock Montessori is on local city roads past White Rock Lake and through the Casa Linda area. It is tucked in a wooded neighborhood between forested lots and offers a very discrete entrance that took me back to driving to camp in the Texas hill country. There is a tennis court on your left surrounded by trees and on your right you get a glimpse of the expansive school grounds and the school building. Upon entering the two story building you see a long hallway in front of you, a large cafeteria style room to the right and stairs and another room to the left. There is a desk where a wonderful woman named Stephanie greeted me.

I should pause for a moment to say it took a few phone calls to speak with the Director, Sue Henry, to discuss the school and/or set up a tour and she wanted to push me out a little bit because I was looking at 2015 not 2014 which was fine with me. Then I had to postpone my tour because of a scheduling conflict and we played phone tag again. When I arrived they had me down for a different time than I had. I guess I was an hour early and Ms. Henry was not able to give me the tour so Stephanie was my tour guide.

Each of the three year classes (3 years – Kinder, 1st-3rd grade, 4th-6th grade) have 2 dedicated classrooms with about 24 students in each classroom.They really focus on equal number of boys/girls and each class grades. The Middle School is 7th and 8th grade and also has about 24 students in one combined class. The school does not have any uniforms and uses a carpool pick-up/drop-off type system. Which can take away from the daily parent-teacher interaction, so I wonder how parents receive feedback on their children, I did not ask.

Stephanie and I looked through the first classroom that was used for before/after school care and walked out to the Lower Elementary playground area. She pointed out that all elementary classrooms open up to the 2 different playgrounds that they have and that children are able to do their works outside if the want. This playground had a jungle gym, wagons, garden area, sand pit and lots of fun things for the children. In the morning it had some nice shade around the perimeters. On the porches of the classrooms there were rain boot holders for all the children. The children are encouraged to go out side even if it is muddy to play and the shoes also help them when they are gardening. Which is so true of the Montessori way.

We then walked across to the cafeteria. There was a lot of artwork on display and she mentioned they had just held an annual parent night where parents came to look at the art the children had worked on. This year was Native American art and the pieces were all very beautifully done. They use a catering company, Guess Who’s Coming to Dinner, to cater lunch for the children. It is an option to buy lunch at $5 on a debit style card or the children can bring their own. Parents provide class snacks for the lower elementary classes and children in the upper elementary and middle school are able to bring their own snack if they want. They also use this room for school performances and parent meetings and it was mentioned that they do not use this room for any sports activities.

We then walked down the hall, which houses all the preschool and elementary school classrooms on either side. We walked into one of the 3 year-old to Kindergarden classrooms. The first thing that I noticed is the children were moving about, individually, but there was a definite buzz/movement to the classroom I did not expect in Montessori. The classroom had a small sink area and large windows opening out to the garden, the two teachers were engaged in conversations with students. It looked like a couple of students were busy with group work and a couple were busy with individual works, but again, a few students just seemed busy moving around the room. Stephanie at one point just stood there…..not pointing out anything or educating me on what the students were, it was kind of an uncomfortable moment for me as I did not know what I was suppose to be doing.

When we left this room we walked by the library which is literally the size of my large bathroom with floor to ceiling walls and about 5 children and 1 adult moving about in it. It seems small and distracting, but the students nor the adult tutor seemed to mind. The sweet story behind the library is that children can pick out a book on their birthday, read it at home for a bit then donate it to the library. Most of the whole library has been procured this way. What a great way to support the citizenship aspect of Montessori teachings.

We ducked into each of the different elementary classrooms and what I liked is being able to see the similar but different vibes of the classrooms, like one classroom has a class dog and another one has a male teacher. I still felt this energetic hum and movement in all of the classrooms and noticed many Montessori works throughout each of the rooms. However, these classrooms were filled with more “stuff” than my impression is typical for Montessori classrooms. There were aquariums, terrariums and a few standard educational games/items that seemed to take up a lot more space that I expected. Starting in the lower elementary classrooms there is a computer that the students can work on and in the middle school area there is a science lab and what looked like a full kitchen.

I do have to point out that Stephanie made a comment that I had been thinking during my tour….the walls were COVERED with stuff. I will touch on my thoughts about this in a future blog, but I am so glad she pointed it out. She said it was so distracting to her and that normally the walls are kept bare but because of the previously mentioned art show, there were items on display in every classroom, hall and public space.

After we looked a few rooms we saw the art and music rooms. Again, for such an expansive property and space, these rooms were so small, I really don’t know how even 5-6 children could be in there with a teacher and work. But obviously they can! Past these two rooms is really (to me) the highlight of the whole school…..the garden & farm.

Yes, garden and farm. Ducks, chickens, goats, oh my! Each classroom has it’s own raised bed garden with food that they harvest. The middles schoolers harvest their food and eggs from the chickens and sell them as part of their entrepreneurial focus (again a huge Montessori foundation). At the end of the year they have a shareholders meeting to divvy out profits and leave the incoming class with a financial foundation. The chickens and goats roam around the 6 (YES SIX) acres of land regularly and have a very post, urban life. This is all supported by the school’s education teacher who also leads day and overnight trips to a school property in Fairfield, TX.

The upper classrooms also lead out into the 6 acres of wooded land. There is an amphitheater and a large soccer field and even a parent-supported zipline!!! How fun is that? The children are able to roam in the woods as they wish during their free time. The amphitheater is used regularly for class presentations, musical performances and drama showings.

Unfortunately, when I asked Stephanie about the classroom set-up or features, she could not provide me any. If I were someone who was not aware of the Montessori classroom, this would be very disheartening. I asked her if the classes do any practical life exercises or have classroom chores, again she was unable to really direct me, it wasn’t until I looked around and saw a daily job chart to answer my own question.

We then went upstairs to the Middle School classroom. Each of the students had chairs and these wooden “desks” that fit on them, it was really neat. They were doing testing (what is it with me and touring during testing???) so there was not that much activity. I could see a half kitchen in the corner and the room had windows that loverlooked all the classrooms on the first floor. There were a couple of computers and this classroom had a male teacher at a desk in the front. This room also had stairs leading out to the garden & farm out back.

I was then lead to Ms. Henry’s office where we sat and talked. Ms. Henry did not have the most congenial personality to me. She answered my questions with bare minimum responses and honestly just did not show a lot of passion. Until she talked about the history of the school and the generosity of previous parents in giving to the school. She did not give me a full understanding of the admission process, but basically you submit an application, then if they have spots they call all the waiting families. The families schedule family interview and in-class observation then they send out acceptance letters to whoever completes all the processes and “it just all works out”. Honestly, I loved the school but was really thrown off by Ms. Henry and even reached out to a few others whom I knew had toured the school…and was happy to hear I am not the only one that has felt this way. One note about this is that I’ve also heard she is a very warm, loving woman and will be retiring in the new few years.

A few other things to note, the school does not offer a lot of extra activities for the students, I think girl/boy scouts and tennis were the only things that Ms. Henry mentioned before stating there are a lot of other places to join sports teams or take music lessons from. There is a strong Parent organization and it sounds like they are very active in the day-to-day student life. They also perform annual testing in all levels to keep up with most other private schools and to give the children some kind of benchmark if they need to transfer to another school. Most children “graduate” from White Rock Montessori and attend both private and public schools like Bishop Lynch, Booker T. Washington, Episcopal School of Dallas.