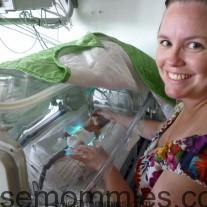 I’m not about to write that my experience of seeing CC for the first time is the same as every mother of a premature baby’s experience, however in the six months in which CC was in hospital I did get to watch quite a few introductions and there was almost always the same initial expression and reaction.

Cyprus is a small island nation and so is equipped with only one NICU, which is an hour and a half away from the hospital where I gave birth to CC and because of that I didn’t get to see him for five days. My husband spent those days with him in the mornings and me in the afternoons. He brought me a picture as well as a video to see. I remember looking at these and feeling nothing, absolutely nothing. Maybe I was in shock or maybe I just couldn’t relate to what I was seeing. I don’t know why exactly but what I do know is that I felt ashamed because that’s not what a mother is supposed to feel.

It was on CC’s sixth day of life that I met him in person. How did I feel? Well, when I looked down at that tiny baby I remember feeling horrified. He didn’t look like a baby. He was what I described as a foetus creature. He was as tiny as a baby bird. His eyes were fused shut. He didn’t have nipples. His ears had yet to unfurl and resembled cinnamon buns. He was all skin and bones. He had no muscle tone and so lay limply with his legs and arms splayed at his side. He was ventilated and the ventilation tube made his mouth hang open. He had tubes and wires coming out of every part of him. He was in an incubator and surrounded by machines which I didn’t understand. How could I have felt anything other than horrified. My husband took a photo of me during those first few moments. My face is tight and my body is stiff from the horror. I was overwhelmed by it.

Then I took a deep breath, drew my body upward and became his Mom. I’m struggling to find the words to describe how I felt. The closest I can is to say an immense feeling of determination came over me. I was going to heal him. I was going to make him better. I was going to be his mom in any way I could.

My husband has just told me that he remembers me turning to the nurse and asking to be allowed to touch CC. He said the way I asked was so natural like there was no reason why I wouldn’t touch him. Not the wires, nor the machines, not even the incubator was going to get in my way.

As a very dear friend of mine described it, I was a mother bear and I was going to roar.

To go back to what I said at the beginning. I saw my reaction reflected in most every mother I saw, horror and then sheer determination.

Want to read more from Eryn? Born too Soon; Life on a NICU for a Preterm Baby and his Mom

Tips on how to play with your baby

How I became a Mom to my Baby in an Incubator

3 thoughts on “Meeting Your Premature Baby for the First Time”