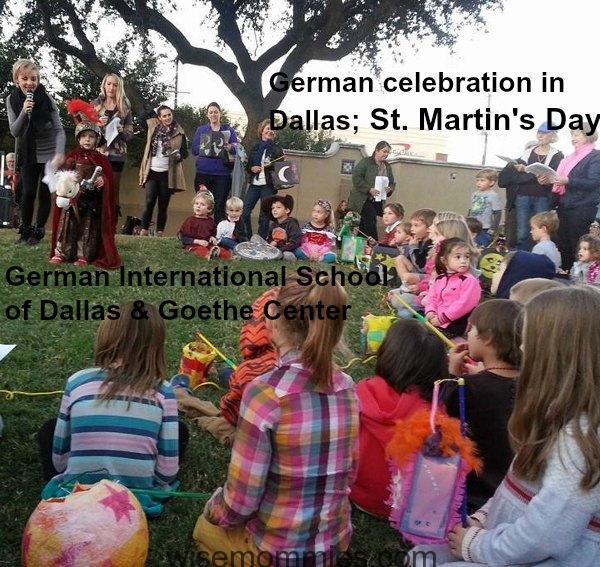 Yesterday our little Bavarian German/Texan family celebrated St. Martin’s Day with the German community in Dallas via The Dallas Goethe Center and The German International School of Dallas.

Did you know there is a German International School in Dallas, TX?

Top 3 reasons why I love the German International School in Dallas, German ISD:
1) Rain, shine, snow, heat, the kids go outside to play for 1-2 hours a day
2) German teachers, German holidays, German culture taught; kids are only speaking and hearing 95% German at school
3) The community of other German families. The connection is strong; see our St. Martin’s Day pictures below for one example

In Germany, on November 11, families celebrate St. Martin’s Day, “Martinstag.” Children make lanterns at home, or school, and then gather at a special location to sing songs and parade with their homemade lanterns in remembrance of St. Martin, a man who was a Roman solider, turned monk, baptised in adulthood and eventually obtained Sainthood. For the celebration there is usually a man dressed up to represent St. Martin as well. He wears a long red cloak and leads the parade on horseback. Even though St. Martin’s Day was officially a Catholic holiday, it has become more of a cultural holiday celebrated throughout Germany even by Protestants.

St. Martin’s Day, “Martinstag.” Dallas, TX
The children from German ISD, reenact the story of Saint Martin. It’s such a sweet story, showing and teaching all the kids empathy and kindness. For reenacting the story, they have one child as the poor beggar who is dressed in rags and freezing most likely to death. Other kids walk past the beggar saying they didn’t have time or have anything to give. The child who is playing St. Martin comes to the beggar. He takes his own warm cloak off, takes his sword, divides the cloak equally into two halves, and wraps the beggar in his cloak.

The lanterns are often made with paper and they put real tea candles inside. I was really nervous about sending my three boys to the parade with candle lit paper lanterns, in close proximity with a bunch of other young children, also caring fire hazards, during a somewhat windy and dark evening. Images of one of my three boys going up in flames often came to my mind. Therefore, I took the cute fire burning candles out and replaced them with a flameless battery operated amber LED tea light, but it still looked and even flickered like a real candle. Nobody would ever know the difference, and then I only had to worry about other candle burning lanterns catching one of my boys on fire.

I do feel somewhat guilty as other German parents informed me that in order to follow a true Martinstag tradition, there must be some panicked moment with fiery lantern stomping going on while a sad faced, crying/screaming child clutches on to a charred lantern. Oh well, being that I’m American, I will only dip my toes so far into the German culture!

That being said, we had another German family that had their homemade lanterns with real candles burning for their 19 month and 3 yr old. After hours of toting their paper lantern’s around, the REAL candles were still burning and nothing had caught on fire. Ummmmm, impressive. My three boys must run a different path because I”m pretty sure this wouldn’t be the same tune that we would be singing with them?

We are so thankful for all the hard work constantly devoted by the German International School of Dallas and The Dallas Goethe Center. It is with their support that the German community in Dallas continues to grow and stay connected. Thank you!

If you are interested in other German celebrations in Dallas, TX, please let us know or contact one of the many links in this post for connecting with the German community.

Are you familiar with St. Martin’s Day? Have you celebrated this holiday or made a homemade lantern?

The Magic of Christmas Markets

May Day and Maypole Celebration