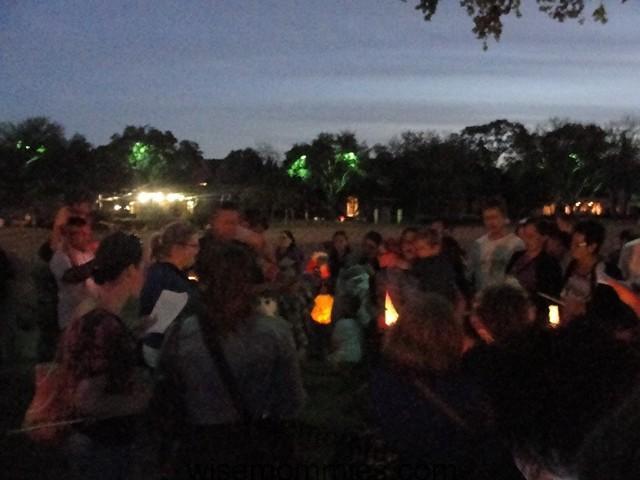 In Germany, on November 11, families celebrate St. Martin’s Day, “Martinstag.” Children make lanterns at home, or school, and then gather at a special location to sing songs and parade with their homemade lanterns in remembrance of St. Martin, a man who was a Roman solider, turned monk, baptised in adulthood and eventually obtained Sainthood. For the celebration there is usually a man dressed up to represent St. Martin as well. He wears a long red cloak and leads the parade on horseback. Even though St. Martin’s Day was officially a Catholic holiday, it has become more of a cultural holiday celebrated throughout Germany even by Protestants.

I was really nervous about sending my young toddler to parade around with a candle lit paper lantern, in close proximity with a bunch of other young toddlers, also caring fire hazards, during an extremely windy and dark evening. Images of my child going up in flames often came to my mind. Therefore, I took out his cute fire burning candle and replaced it with a fake candle, battery operated, but it still looked and even flickered like a real candle. Nobody would ever know the difference, and then I only had to worry about other candle burning lanterns catching my child on fire. Also, no relighting of a candle on our part, yeah!

At first, my German husband demanded a real candle stating that Germans don’t do fake candles. Being that I have a newborn and had to stay home, my husband was going to be the responsible parenting adult for our toddler. That being said, I explained my fear and vision of our son burning up with his lantern or even catching some other child on fire. I told my husband that it was his choice, but he had to watch out for a fire starting and take responsibility for whatever happened. He took the candle out and put my fake candle in. Smart man!

I do feel somewhat guilty as other German parents informed me that in order to follow a true Martinstag tradition, there must be some panicked moment with fiery lantern stomping going on while a sad faced, crying/screaming child clutches on to a charred lantern. Oh well, being that I’m American, I will only dip my toes so far into the German culture!

﻿﻿Mothers in other Cultures

﻿Meaning and Purpose of us as Mothers