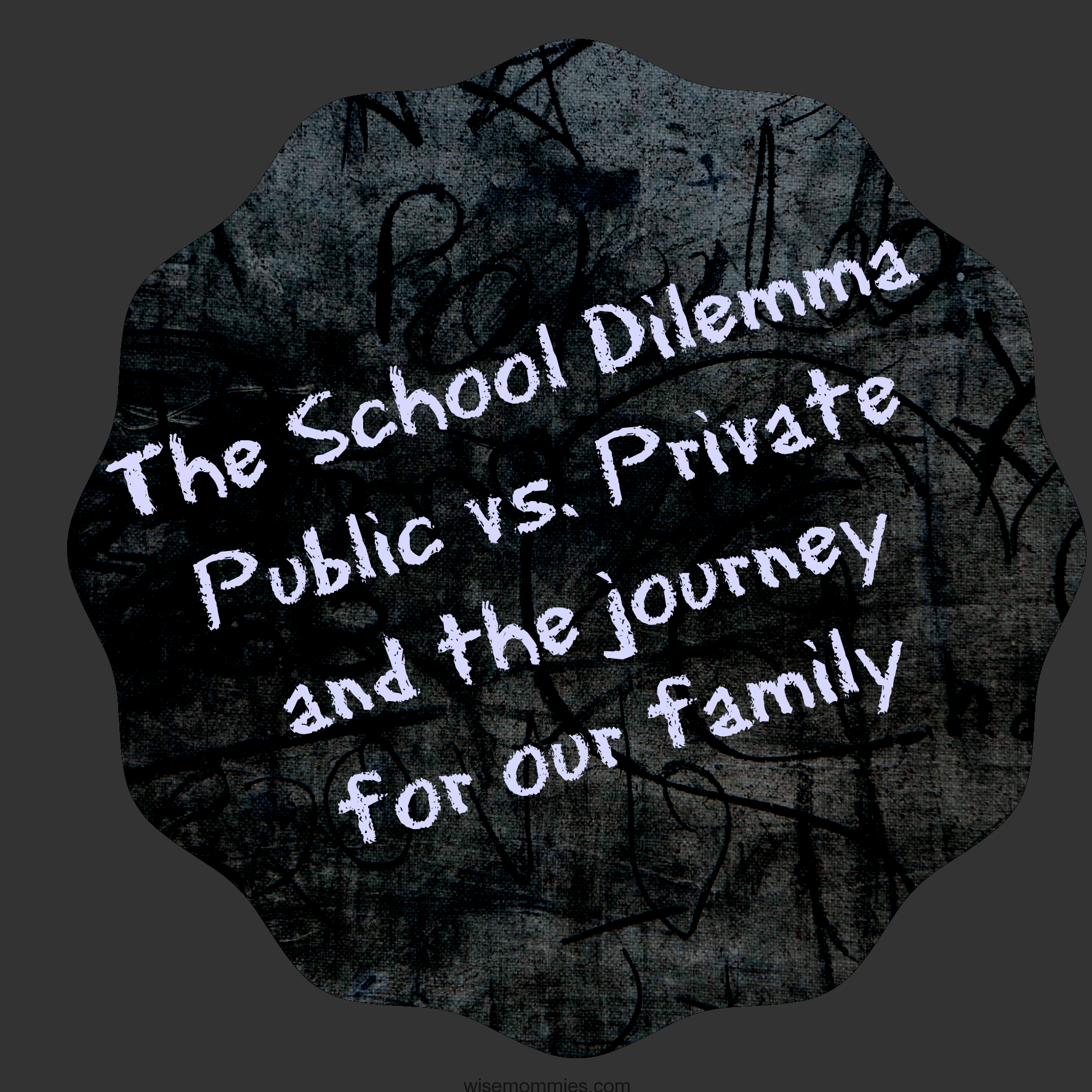 I am a public school advocate….my husband is not. I come from a family of public school graduates (elementary-college) and am proud of the education I have. It is not Ivy League, I was not valedictorian but I got scholarships and have made great strides in my life and loved what I learned. My husband attended private school from the beginning, crossing the Mexican-American border so he could attend the best American private school in the area growing up. He has always been a huge advocate of Montessori education in the early year. So here we are, once again a house divided…public vs private.

I had my issues with public school but they all stemmed mostly from the social side of things. Growing up and changing that environment made me realized that bullying and ostracizing would happen in any social setting, public or private. Otherwise, I felt I was very prepared for college and for life in “the real world” from my public education. I had well rounded classes and I loved taking tests, and even tutored fellow college class mates for tests.

I grew up in a rural area, so we didn’t have access to or even understand or see what private education looked like. So I wasn’t really exposed to it until college and even then, I didn’t really know or understand the difference. It wasn’t until I moved to Dallas and became more aware of the education system through knowing friends who had children and then having our own kids. At an early age people in our playgroup would talk about schools that they were interested in for elementary and beyond and I thought they were crazy. Some would even talk about how it didn’t matter what school they fed into because their children were going to attend private school. At this point I was so naive and really thought it was about diversity (or lack of) or status in the pursuit of private schools. I really questioned why people did not want to attend a school with mixed races or why they felt they needed to social climb….these to me were the only reasons to seek out private schools in a large city like Dallas where you had a variety of public schools and in our area specifically, some really good public schools.

My husband agreed we had some good local public schools, but he still was much more supportive of private schooling, especially Montessori. He really embraced the educational focus of private schools with smaller classes or campuses, more individualized teaching plans and better sense of community among parents. However, he really worried about diversity, especially with us being a multi-cultural family, we knew our chances of having Spanish-English bilingual families in the same school would be higher in public school than private.

So we were at an impasse. One thing I kept thinking of was something I heard along the parenting road…..it is easier to move from public to private but not from private to public. Basically meaning that for the kids especially, they would find it easier socially and educationally easier to move from a public school to private school than if they started at private then went public. I don’t know if that is true at all, but I just kept thinking….well, we will start public then go private if we just don’t like it. (Can I just say again, VERY NAIVE).

Our son became older and more mobile and I realized he needed some separation from us because he was going through so serious separation anxiety and even at home would not let me leave the room. So we began to look at a Mother’s Day Out program for him for a couple of days a week. I looked at a few in different local churches and just felt like they would be OK but nothing stuck out at me until I toured a Montessori school that offered a MDO program. It featured so much of what I had always envisioned for my kids….focus on outdoors, focus on learning with minimal distractions, focus on self awareness, etc. I came home and was gushing to my husband about how amazing the school was….and he was like “DUH!”

This started my love of Montessori, but I still kept thinking that once kindergarten came we would enroll our son in the public school ACROSS THE STREET from us. Yes, literally 150 feet away is a public school. It was perfect, we played on the playground all the time and my son was very familiar with it. So it would be the perfect place to send him on that first day of his formal education….in public school. I had the visions already of where I was going to take that “First day of kindergarten 2015” picture and everything. But the longer our son was in this Montessori based MDO program the more I started wondering about what a difference the more traditional educational style of the public school would be. I didn’t know if I or he would like it more or less but I knew it was different.

Our son attended this school for 2 years and loved it, we loved it and  it was time for him to graduate out of the Mother’s Day Out program. The next program they offered was a the true 3-year Montessori program and he would have to attend five days a week. As a stay-at-home-mom I couldn’t imagine sending him 5 days a week, even if it was just for 3 hours a day. So we started to look at other places. At the same time I started reading a book, Simplicity Parenting by Kim John Payne which really changed a lot of our parenting styles especially our focus on schools. First, it made us realize how much we wanted to become a bilingual family and second it made me CONSIDER private schooling for our children.

So we started to look at other options for preschools for our son……stay tuned for the next progress towards figuring out The School Dilemma.