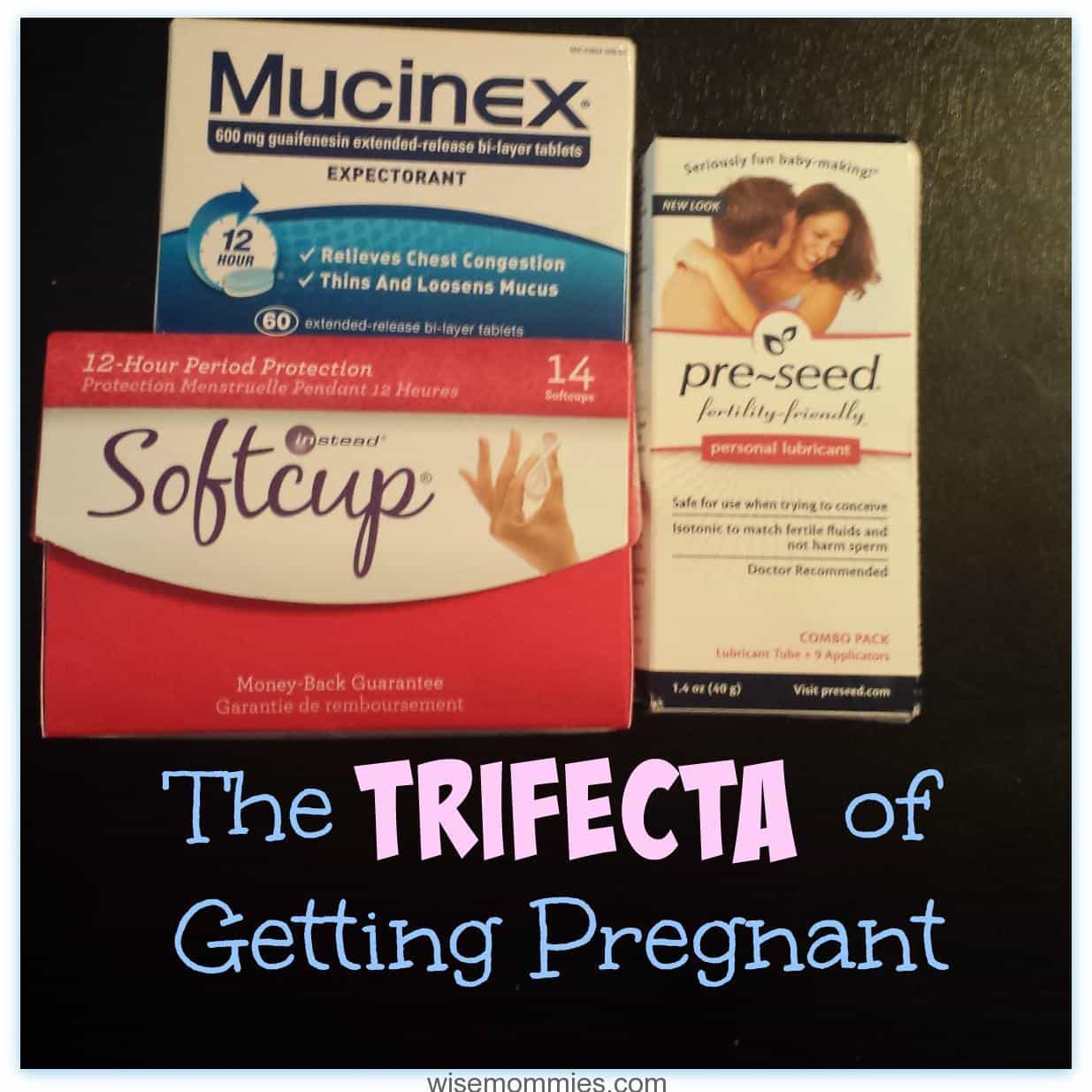 +++I first want to congratulate Carol D. for winning our Kindness Wins Giveaway! You can still read our review and purchase the book now.++++

Recently I was perusing on Facebook and in a Cloth Diaper Chat group, of all places, someone posted the question how could she get pregnant fast. My favorite answer was “Have sex. Often.”

I’m not sure why this post came across my newsfeed, I haven’t looked at a cloth diapering site in a while, but I have been thinking a lot about how to get pregnant. I thought I knew so many of the ways to get pregnant from our previous attempts at conceiving but then three new techniques showed up and I decided to try them. Since we decided to try for a third child we decided that we would be more carefree and enjoy the experience more, so why not try different ways to increase our chances of getting pregnant. I will call them “The Trifecta to Getting Pregnant” mostly because they seemed to work.

Yes, you read that right, Mucinex the expectorant (Guaifenesin), with the commercials of that gross Mucus family moving into your lungs. You see Mucinex makes thick mucus in your body thinner. Doesn’t that sound awesome? Now I’m about to to give you a little anatomy lesson that you might or might not know. Right before you ovulate you create a thick mucus, some people refer to it as egg white cervical mucus (no joke, comparing something that comes out of your lady parts to EGG WHITES…..that will get your sexual juices flowing won’t it???). Cervical mucus(CM) is tracked by many to detect ovulation and most people say that it is there to help the sperm move quickly through your reproductive tracts to reach the egg. I won’t even explain how some people check their CM, but you can usually tell by what ends up on your paper after you go potty.

However, some people suggest that some women’s CM could be too thick and that could be the reason why they do not get pregnant. Their theory is that if you take Mucinex daily in the window surrounding your ovulation you could help the sperm reach the egg for optimal fertilization. Most people suggest taking Mucinex starting 5 days before your expected ovulation date and end a day or two after your ovaries shoot out the little egg(s). It is also very important that you find the Mucinex that is pure guaifenesin with no other pharmaceutical added. Now once I learned about using Mucinex on this Cloth Diapering post I decided to check Google for details. Almost all of the information is leaked through discussion boards. Based on my extensive research (the 24 minutes it took my kids to watch “Jake and the Neverland Pirates”) I decided I would use 600mg of Mucinex twice a day. I started this on day 10 or 11 and took it through day 16 or 17 depending on when my ovulation test had become positive. Some more pharmaceutical sensitive people say they experience side effects like headaches and dizziness. I never did and when I ended up having a cold one month, it helped me survive the cold without using that many tissues.

Let’s be honest. When you are trying for a long time to get pregnant, sometimes sex just isn’t that hot, messy, romantic adventure it was when you guys first met. It becomes another scheduled thing you HAVE TO do and because of this your mind might think about your car needing an oil change instead of it oiling up for some sexual action. In the past few years we have used coconut oil to help in that area. Yes, the miracle oil that people use to cook, clean, exfoliate and moisturize can also be used to help the friction going during lovemaking. I like that the Nutiva coconut oil does not feel synthetic or sticky like a lot of other lubes or coconut oils. However, coconut oil does not mimic your natural juices and will change the pH levels in your lady area which can cause harm to your husband’s precious sperm. In these instances you need a little help and you are trying to become pregnant PreSeed Personal Lubricant might be the lube you should consider.

PreSeed mimics a lot of the natural lubricant that a woman produces but also helps balance the pH and chemical environment to help the sperm live long and swim strong! Even if you make enough of your own liquid love, your pH levels could be too acidic and risk harming the swimming sperm from making it all the way up to the egg in time, PreSeed helps with keeping your pH levels at a happy place for those little spermie to swim all the way to your awaiting egg. PreSeed is also glycerin-free which means less toxic chemicals in your lady bits. It comes with applicators so you can make sure the lubricant is deposited all through your love tunnel, and to be honest, I used this mostly on the outside than the inside. I really liked that you could use as little or as much as you wanted and it felt very light and not sticky or synthetic at all. I felt I could just wipe it away and feel pretty clean.

OK, here is where you are going to think “WHAT? The WHAT?”

Have you ever heard of menstrual cups? Menstrual cups are these cups that you insert like a tampon and it catches your lovely shedding uterus during the time that Aunt Flow visits. No joke. You then either throw the cup away, if it is disposable, or, if it is reusable, you wash it out and throw that thing back up inside you. This is a fairly new feminine hygiene phenomenon especially with crunchy mamas like myself. I admit once I started my period when my daughter was 16 months I bought one….and tried to use it twice and failed.

But like I said, many women raved about using Soft Cups specifically for getting pregnant. Basically you insert the Soft Cup after you have sex to capture as much sperm as you can and keep it close to the cervix so they can swim on up to your waiting egg. So I looked them up. They have a very different construction than any of the reusable cups I had looked into and so for that reason I thought I would give them a try to see if they might be more comfortable for me. First, I have to say these things are HUGE compared to the reusable cup I tried out at 16 months postpartum. Second, I needed time to work at figuring how to use them properly before we needed them in action.

It took a few tries, different squatting positions, and watching a few YouTube videos but I finally figured it out and WOW. This thing is more comfortable than a tampon by a million degrees!! So I figured it would definitely work after having sex. I just sort of scoop it inside of me after our lovemaking and move about my business. No more sticking my bottom in the air for 15 minutes, no more worrying about moving too soon after ex, no more worrying about which side I needed to sleep on, no more dripping!!!! l can just insert the SoftCup and know that it is keeping the sperm as close to my cervix as possible and that they can then swim up my uterus and tubes easier. You can leave the SoftCup in for up to 12 hours. I usually insert after night sex and remove in the morning. Some women have had issues removing the cup, and again I would suggest watching some YouTube videos and bear down when removing!

As I mentioned, I have called this my Trifecta of Getting Pregnant. When you combine my advanced maternal age and my history of infertility/miscarriages, my chances of getting pregnant are very slim. The first month we tried my Trifecta, my husband ended up with pneumonia and bronchitis and I was still working out the logistics to it all….so a big fat negative came out of all that. The next month I really focused on using it all, except one time I did not use the PreSeed, and a few weeks later we got our awaited POSITIVE!!!! (A side note here, before you send any congratulations, we have now experienced another miscarriage).

This is a continuation of my journey through the thoughts, feelings and experiences contemplating adding a third child to our family. My initial post provides a glimpse into the reality and the joke of this question for our family. I also question The 40 Year Gap and discuss how our family is Comfortable as a Family of Four. I also share our Pregnancy Fire Drill that happened a few months ago. I really struggle if I should go in The Bubble when trying to conceive. I then asked the question, “Can Facebook Help Me Get Pregnant?” My husband and I also consider Is Gender Selection for Us or Just for Fun? Then we tried my Trifecta for Getting Pregnant and it worked!!!

30 thoughts on “The Trifecta to Getting Pregnant”