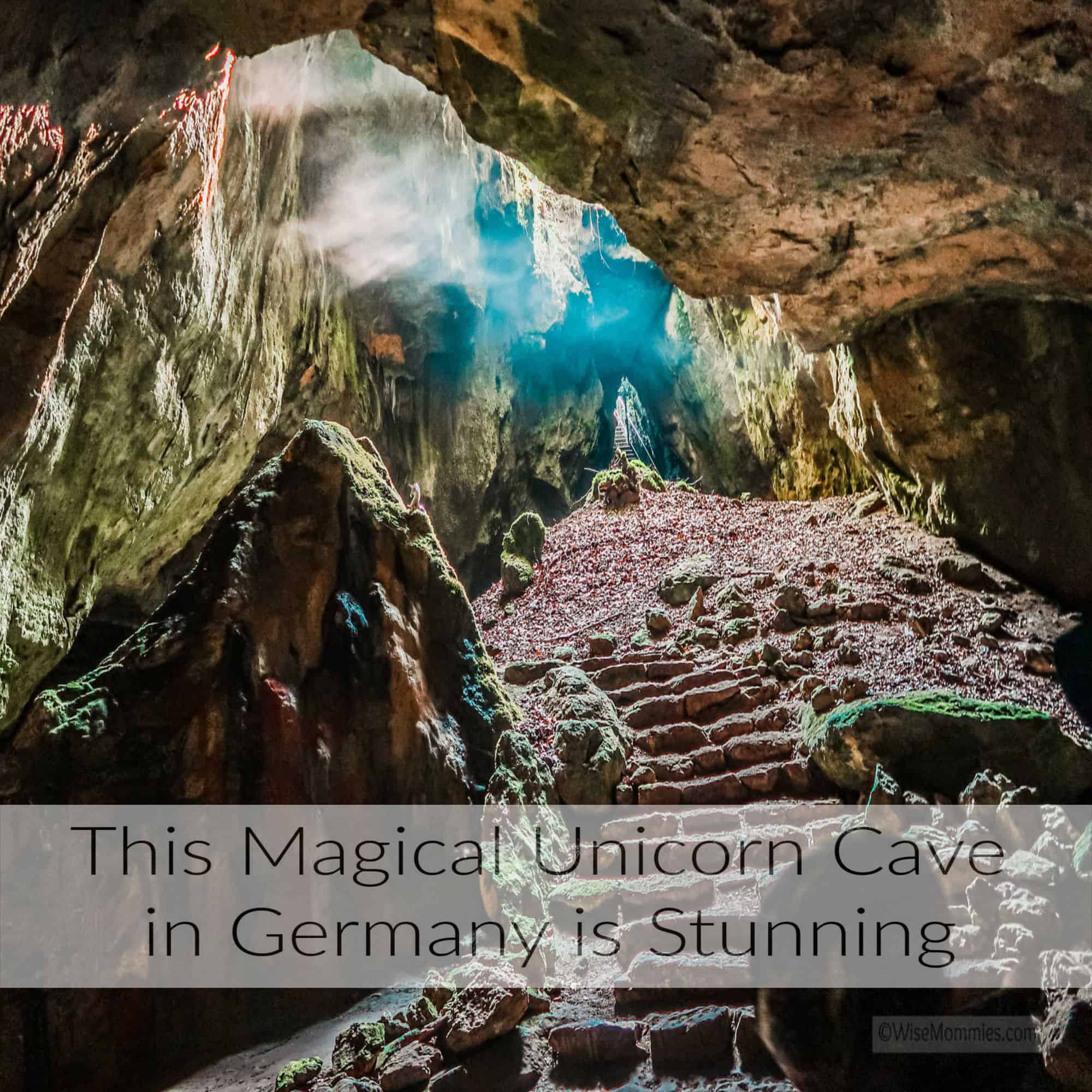 This Magical Unicorn Cave in Germany is Stunning. I know what you are thinking, why is this cave called the Unicorn Cave when unicorns aren’t even real? Or, are they? Did unicorns exist? I can almost hear you thinking, is that a real unicorn fossil in front of that cave? If you don’t believe in unicorns, maybe after reading this post you will?

Surrounding the Unicorn Cave, there was a beautiful forest with trails to walk.

The sign on this tree points visitors in the direction of the cave which is called “Einhornhöhle.” In English, that’s “Unicorn Cave.”

Even though we’ve explored many underground wonders such as caves and tunnels in the USA and abroad, this is the most magical and beautiful cave that I have ever seen.  We love to learn by hands-on studying and exploring history, geology, cultures, and more via different underground wonders in this world.

Unicorns are written about in the Bible. For example, Job 39:9-10 (KJV) the King James Version of the Bible talks about unicorns. In the Bible, the word unicorn is actually a translation from a Jewish folklore beast known as the re’em.

Even William Shakespeare said, “Now I will believe that there are unicorns.”

You can click here to read this National Geographic Kids article about the Siberian Unicorn Fossil Discovery.

According to CNN, A well-preserved fossilized skull found in Kazakhstan reveals the shaggy unicorn creature was still alive and walking this earth a mere 29,000 years ago.

Fascinating Narwhals (Unicorns of the sea) are alive today.

In medieval times, unicorns were painted, added to stained glass windows and even statues. The legend in Germany is that bones found in this cave are unicorn bones which were a popular remedy used in the Middle Ages.

Why not stop and look for unicorn bones, and see a stunning cave? Wait, there is even more that I must make sure to include in this post according to my three boys. Now, this is important, the rocks and dirt outside and all around the cave were glittery and rainbowed colored. Yes, seriously!! Even after 30 minutes of looking at the ground and gathering rocks, I wasn’t sure if I would be able to even get my boys to join the cave tour.

It all boils down to this, untouched Harz Mountain forests to explore, a unicorn cave, magical glitter and rainbow rocks all-around a unicorn cave, and even unicorn toilets, basically makes this a fun exploration visit for anyone to discover in Germany.

This isn’t the only place in Germany to discover unicorns! The town of Schwäbisch Gmünd is unicorn crazy! Thank you for reading and following; I’ll be posting about this town and more of our Germany and European ventures. Thanks for reading!!

This post is dedicated to my precious, adorable, magical, Unicorn Niece.

During our zoom the other day (COVID 2020), she put on a unicorn headband and I asked her if she believed in unicorns being real. I can’t wait to take her to the Unicorn Cave in Germany!!!

But currently, I’m just wishing for unicorn miracles to get past COVID so I can hold her in my arms again!!

2 thoughts on “This Magical Unicorn Cave in Germany is Stunning”