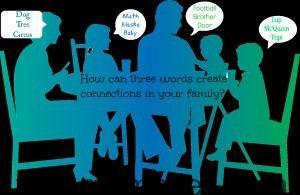 When my husband and I fostered two little boys we knew nothing about them before they came to live with us.

Although they were ages four and five their language skills were similar to that of two or three year olds. They struggled with putting sentences together or completing a full thoughts (in two different languages). We knew we needed to work with them on their vocabulary as well as their speech/language delays but we also wanted to know what was going through their little brains and what happened to them when they were at school.  My husband came up with a great way to engage these children and develop their language: the Three Word Game over dinner.

The idea is simple, you give another person three words and they have to come up with a story that incorporates those three words. When working with the boys we wanted this to be more purposeful because we were creating a special relationship with them but also wanted to know more about them and their days. So in that case we always included one person at the table (or one of our animals) and something relevant for that day. An example would be “Papi, State Fair and yellow”.

In the beginning the boys would struggle with just remembering and saying the three words. There was lots of mumbling and embarrassment as they reached into their little brains to make connections and build language skills. So it would go something like this “umm, Papi…..yeah…mngngm, gnglug, What else?..oh….fair state….Papi….eating…..ummm state fair….Que mas? …oh and YELLOW!!!” Then eventually it moved to “Papi went to the State Fair and he saw yellow!”

By the end of the six months they were telling us two to three sentence stories with beginning, middle and end some with things that happened with their day. We were building connections but most surprising was that they started to use their imagination and would tell elaborate stories of conquest and happiness, usually surrounding WALL-E, their favorite cartoon. We would be able to understand if they had a quiz at school or maybe even if they thought they ran FAST with a friend. They loved our little Three Word Game and it was the highlight of dinner for them.

Our Family Friday challenge is to implement this Three Word Game with your family. Change it up if you want but get the conversation and imagination flowing in your house.

What was your favorite three word combination? What impact have you seen with this game on your family? Where else could you use this game in your life?

Other posts you might also enjoy: Family Dinner Read, Advice for better communication with teenagers

Saying thanks to people who serve you: Labor Day

How can 2 minutes make big changes?