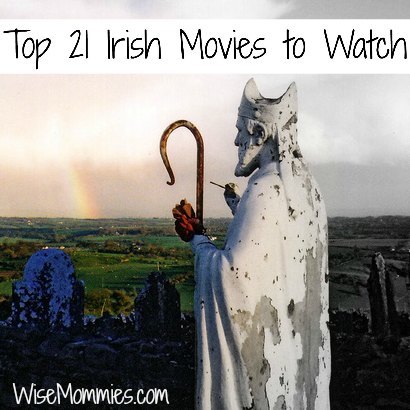 St. Patrick’s Day is one of the most celebrated festivals and cultural events in the world. After having lived in Ireland, my life has been forever changed. One regret was that I hadn’t studied up more on the Irish culture before moving to Ireland. The Irish have an extremely rich culture and watching movies about Ireland can gift the whole Irish experience beyond green beer and shamrock headgear or catching beads at a St. Patty’s (Paddy’s) parade. This post is a list of the 21 Best Irish Movies to watch! Click here for 17 Irish Kid-Friendly Movies to Watch.

The following are Irish films, whether, through the language, religion, The Troubles, music, or mysticism, you can experience a little bit of Ireland and the Irish culture in your home. Side note: most adult Irish films are rated R due to language. This post contains links to watch movie trailers as well as affiliate links to DVDs, but most movies can be seen via Amazon Prime and or Netflix.

#1 The Matchmaker: (1997) Rated R. Comical & romantic. Overall it didn’t receive the highest of ratings. Why I like it? It’s based on a real-life Irish festival in Lisdoonvarna,  County Clare. The movie was mostly shot in and around the real location of the matchmaker festival as well as in Roundstone, Galway. Trailer DVD

#2 Leap Year: (2010) Rated PG. I have to confess that I absolutely love this film. It also didn’t receive great reviews, and I can understand via some of its clichés, cheesiness, and predictability. However, it’s an easy, clean, sweet movie to watch (can’t say that often about Irish movies) and had me laughing constantly. I also love it because I could relate with many, actually almost all, situations in the movie from my own experiences while living in Ireland. Trailer DVD

#3 Waking Ned Devine: (1998) PG, Well-known comedy film of some Irish who steals a winning lottery ticket from a dead man but then the whole village is cashing in on the ticket. Filmed on the Isle of Man. Trailer DVD

#4 The Commitments: (1991) Rated R. Won many awards, very popular for its music, well-known amongst the Irish. I was often asked if I had seen this film. Trailer DVD The Irish often told me, “The Irish are the blacks of Europe and Dubliners are the blacks of Ireland.” It wasn’t until I actually watched this movie that I understood where this quote came from and the meaning behind it.

#5 The Irish Pub: (2014) Rated NR. It doesn’t get more Irish than an Irish pub!! After having traveled to more than 50 countries, I’ve learned that in every country Irish pubs are popular. In Ireland, I visited the oldest and even worked at a few pubs as a bartender, waitress, bouncer and coaster girl. Watch The Irish Pub.

#6 Once: (2007) Rated R. A simple and sweet film showing a man from Dublin who spends a week with an immigrant cleaning lady. Together they sing and play music together. I like this movie as it reminded me of my days traveling alone. Sometimes, you just met someone and spent a fun week together, changing one another’s life in some way. Part of this movie was also filmed in the area where I was living in, Mountjoy Square, Dublin. Watch Trailer. DVD/Rent

#7 In America: (2003) Rated R. This movie shows Irish immigrants who move their family to America. This is a movie that hits you more after you watch it then during the actual movie. Not for young viewers! It does contain some sexuality, drug references, brief violence, and language. Watch Trailer. DVD

I like this film for several reasons: 1) Part of the movie was filmed just one street over from my flat in Ireland and I got to watch the filming. 2) I even had a drink and chips with some of the set crew. 3) Shows just how difficult it can be for immigrants, and I could relate with several situations. 4) This is a great movie while also very depressing. You won’t walk away feeling happy. But sometimes the real movies are good to watch.

#8 A Shine of Rainbows: (2011) Rated PG. This is a sweet little film, and actually, I should have added it to my 10 Family Friendly St. Patrick’s Day Ideas. The movie shows an eight-year-old boy, Tomas, who is bullied and mocked in an orphanage. He is suddenly adopted by a kind woman but her husband is not so loving and kind. Will love conquer all? Hard to say since this isn’t a Disney movie. You’ll have to watch it to find out.Trailer and Film.

#9 Michael Collins: (1996) Rated R. This is a good starter movie for foreigners and tourist trying to understand the troubles and the Irish civil war. In Ireland, my boss gave this movie to me and told me to watch it first. He said he gave it to all the foreigners as a beginner movie and then suggested some of my listed movies to go deeper into history and culture. In the movie, when I watched, The Rising, Collins’ first appearance in national events, on Easter Monday 1916, was at the rebellion’s headquarters in the General Post Office (GPO) in Dublin. I was shocked because I walked by the GPO every day to and from work. Was eye-opening! Trailer Watch Film

#10 The Magdalene Sisters: (2002) Rated R. Based on some true stories from over 10,000 young women who were imprisoned and exploited in Catholic workhouses, Magdalene Asylums, between 1922 and 1996. These women were sent to these Magdalene Asylums when deemed “fallen” by their families or guilty of other minor offenses via the state or churches such as being a child of an unmarried mother or not paying for a train ticket. Trailer DVD

#11 The Wind That Shakes the Barley, (2006) Trailer I haven’t seen this film so I can’t give much input except for a quoted description “backdrop of the Irish War of Independence, two brothers fight a guerrilla war against British forces.”

The Guard, (2011), Rated R, I have seen this movie. Two cops, one an unorthodox Irish policeman and one an uptight FBI agent try to stop an international drug-smuggling gang. I didn’t list this separately as it doesn’t really teach you much about Ireland but it’s a movie that gave me some belly laughs and is a popular Irish film in Ireland. Trailer DVD

The Irish Love Stories about Selkies

#12 Ondine: (2010) Rated PG-13. This is an adult selkie story. In my family-friendly Irish post, I listed two movies to watch with children about selkies. As I have often said, “The Irish love stories about selkies.” This film also stars one of my favorite Irish actors Colin Farrell. Trailor Watch Movie

#13 The Young Offenders: (2016) I haven’t seen this film yet. It’s a new release but looks funny. And it is based on the true story of Ireland’s biggest cocaine seizure in 2007. A drug-trafficking boat capsizes off the coast of West Cork along with 61 bales of cocaine. Word spreads that a few bales of cocaine are missing. This movie shows two Irish boys stealing bikes and trekking off to find the missing bales. Watch Film.

#14 PBS Special: In Search of Ancient Ireland is another film that I haven’t seen but was recommended via feedback from my Irish Family Video List. This film is a three-part Irish/American television documentary about the history of Ireland from Neolithic times to the English invasion of the 12th century. Trailer DVD

Getting Heavier into Irish History and The Troubles

#15 In the Name of the Father: (1993) Rated R. An IRA film based on the true-life of Gerry Conlon who, along with his father, was imprisoned, for the 1974 planned IRA bombings. It was later discovered that authorities fabricated evidence. It was during a tour through a Belfast courthouse that I heard the story of Gerry Conlon and the Guildford Four. Trailer. DVD

#16 BBC The Troubles You need to register an account with BBC if you don’t already have one to watch their shows. The Troubles refers to a violent thirty-year conflict framed by a civil rights march in Londonderry on 5 October 1968 and the Good Friday Agreement on 10 April 1998.

#17 Bloody Sunday: (2002) Rated R. Another fav of mine, movie showing and retelling of the 1972 demonstrations. At least watch it to understand U2’s song, Bloody Sunday, better. Trailer. Watch Film.

The Reality of Hunger Strikes

#18 The Hunger: (2008) Rated R. This is another film that means a lot to me personally. When living in Ireland, I would often see posters calling for a hunger strike against certain laws, taxes, wages, or political stances. The posters and trying to understand the long-running issue of hunger strikes in Ireland, with talk of St. Patrick himself partaking in a hunger strike, was difficult for me to comprehend. The sociological ideas of human beings using their bodies as weapons for a political stance, communicative suffering, was all very shocking for me personally. Trailer. Watch Film.

Beyond the true story behind this movie, Ireland has a long history of hunger strikes. This movie shows the real-life story of Bobby Sands and his 1981 hunger strike. The main actor Michael Fassbender is a German-born Irish actor and one of my favorite actors. For this role, he actually lost nearly 50 pounds. It was a hard movie for me to watch.

The troubles were not predominantly experienced by men, I wish there were more movies showing the Irish women’s historical roles.

#19 Some Mother’s Son: (2011) Rated PG. Adding on to the above film, The Hunger, this movie shows the same 1981 hunger strike from the perspective of two of the mothers. Having three boys, I definitely could not watch this now. Wow!! I can’t even begin to imagine….Watch Film.

#20 Silent Grace: (2001) Speaking of WOMEN, what about the 1980 hunger strike in the Armagh women’s prison and their dirty protest? Not something really talked about. Trailer

Even in this movie, the real story isn’t fully acknowledged, but 3 women in the Armagh prison joined the 7 men in Maze for the 1980 hunger strike. Two of the women had to be force-fed for 203 days. That just blows my mind!!

#21 Omagh: (2005) PG-13. This was another suggested film to watch. I haven’t seen it yet. This film shows the aftermath of the 1998 IRA bombing that killed 29 people in Omagh, Northern Ireland. DVD Watch the Trailer. 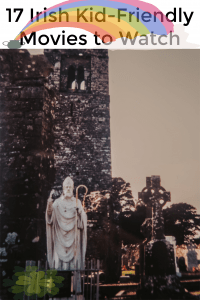 This post was first published in 2016, since then, via feedback from readers, the following are some Irish movies that others thought should be added to this list.

#23 The Boys and a Girl from County Clare

#29 The Boxer: From Brooklyn, “The Boxer, starring Daniel Day-Lewis and Emily Watson… it’s rated R. A rather predictable, yet still engrossing film about a former IRA soldier who is released from prison after 14 years and tries to live a peaceful life outside”

What Irish movies would you add to this list?