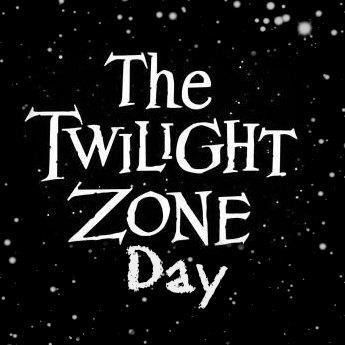 “You are about to enter another dimension, a dimension not only of sight and sound but of mind. A journey into a wondrous land of imagination. Next stop, the Twilight Zone!”
If you aren’t familiar with The Twilight Zone, click here for a quick history lesson. On a weekly basis, I dish out some dorkiness to my boys via Twilight Zone quotes such as “oh what a wondrous land of imagination” or “and now we are entering the twilight zone.” My pre-schooler always asks what that means in which I reply, it is a dimension of mind and imagination….or something usually silly yet serious along those lines.

How to Celebrate Twilight Zone Day:
Have a Twilight Zone party with friends or a significant other: Throw yourself into the fifth dimension by dressing up like one of the TV characters and having a Twilight Zone TV series marathon watch. Unfortunately, I can’t do this with my kids because they are still too young to watch this show. However, I will be in the crazy unknown still to be explored dimension of the TwinZone which is a reality series which I am currently producing and playing in for the rest of my life…another dimension beyond the mind of most singletons and/or parents of singletons…a journey into the wondrous but crazy land of multiples. Next stop, the TwinZone.

Falling Back into TwinZone Tuesdays

Have You Had “THE MOMENT?”