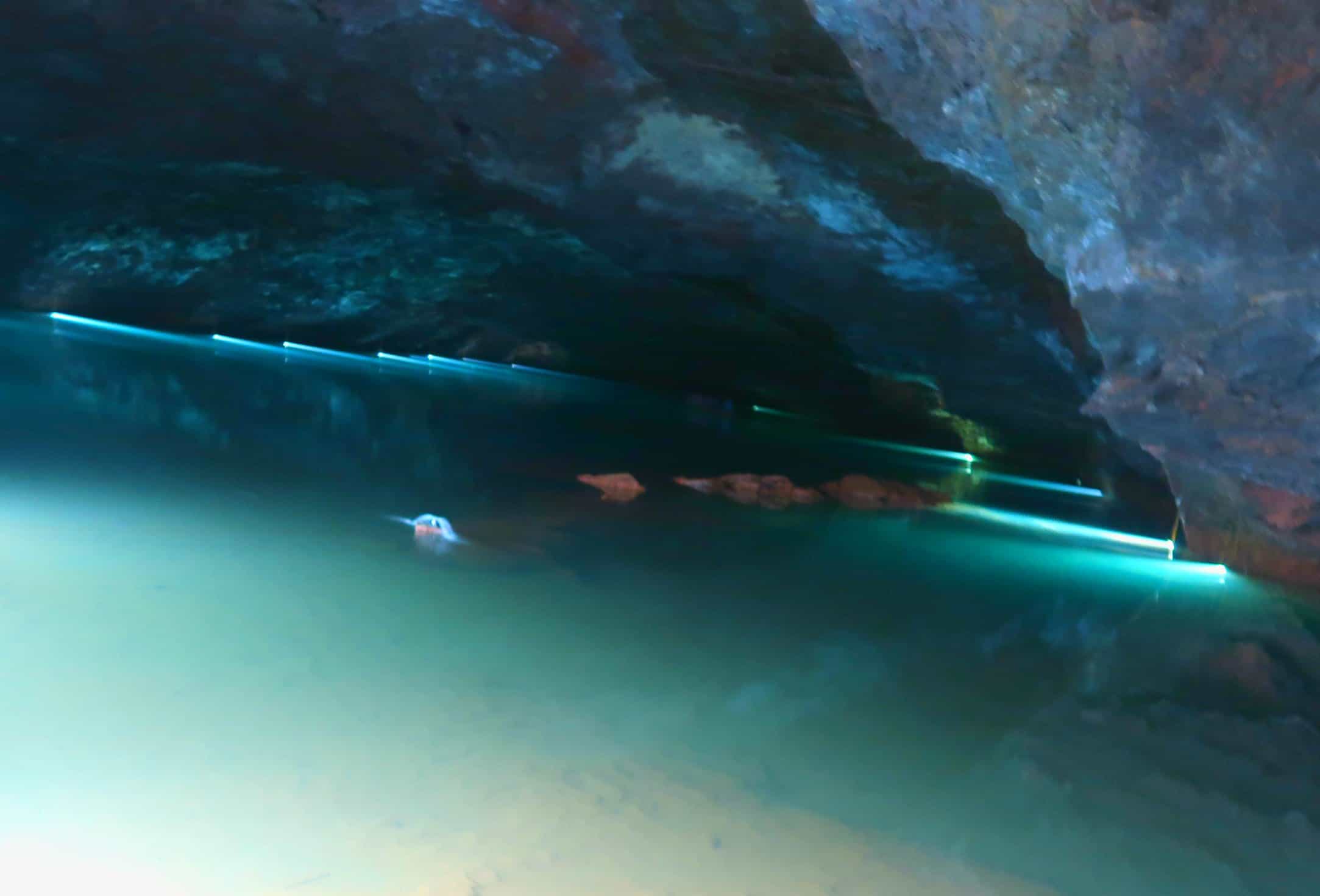 What I thought would be just a brief stop to see some cool underground lake turned out to be a mind-blowing cave excursion, history lesson, Guinness Book of World Record find, Registered National Landmark discovery, and educational lesson while hiking 140 feet below ground level. My Unexpected Discovery, USA, The Lost Sea.

A few years ago, my boys and I traveled from Texas to the East Coast without any planned itinerary whatsoever. At one of the roadside stops, I saw a picture of an underground lake and inquired locally about it in conversation. They gave me directions to this place, the Lost Sea, tucked away humbly in the beautiful Tennessee mountains.

Let a child play outside and you’ll never know what they might discover, literally. In 1905, a boy, playing outside, crawled through a hole and discovered the United State’s largest underground lake. The world’s second largest non-subglacial underground lake is Dragon’s Breath Cave, Namibia. Even with today’s modern technology of exploration equipment, 13 acres of this lake have been mapped but the end to the lake has still not been elucidated.

We took a tour on a glass-bottom boat onto the accessible portion of the lake which is 800 feet long and 220 feet wide. The lake hosts some of the largest Rainbow Trout in North America. Since there are no predators for the fish, they just get bigger and bigger. I’m not going to lie; my boys edged closer to me as we went out onto this glowing green lake, eyeing the inky darkness of these huge “fish” swimming under our boat and around us as went traveled through what could have been Batman’s secret cave.

This video is our adventure: My Unexpected Discovery, USA, The Lost Sea

My Unexpected Discovery, USA, The Lost Sea is not just a lake but is also a historic cave system known as Craighead Caverns. It contains anthodites, stalactites, stalagmites, and a waterfall.

The cave has so many anthodites also known as “cave flowers” only found in a few caves worldwide. Actually, 50% of the world’s known anthodite formations are found in the Lost Sea!! Craighead Caverns has so many of these unique and rare anthodites that the Lost Sea is now honored as a Registered National Landmark.

Guided Tour Through The Caverns

Our tour guide was excellent in educating us about cave formations and the history of this cavern. He used a mnemonic to educate the difference between a stalactite and a stalagmite.

The caverns were used by the Cherokee Indians. Indian artifacts such as pottery, arrowheads, jewelry, and weapons have been found in the caves. Craighead Caverns is named after Chief Craighead of the Cherokee Native Americans.

This was a cool find for my boys! Now housed on display in the American Museum of Natural History, New York, are the bones discovered in 1939 of a giant Pleistocene Jaguar. Plaster casts of the jaguar’s tracks found deep inside the cave are displayed at the visitor center of the Lost Sea.

The Cave was once a Refrigerator

The early 1820 settlers in the Tennessee Valley took advantage of the cave’s constant 58F temperature to store potatoes and other vegetables.

This Cave was also utilized by moonshiners, cockfights, was a mushroom farm, and a nightclub for dancing via a wooden dance floor installed in one of the larger upper rooms. When watching the video, you’ll see a date 1863 appear in the cave. They believe a Confederate soldier probably torched this date into the side of the cave. Saltpeter for gunpowder production was mined in the cave by Confederate soldiers during the Civil War.

A side feature while walking through the cave was a luridly lit red hole. If you are a bad person and look into this hole, you will see the devil himself. I couldn’t help myself, as my boys cautiously crept up to the hole and peered over the railing into the hole to see if they could see the devil, I gave off a banshee screech making them jump at least 10 feet. After I looked down the Devil’s Hole, the song “The Devil Went Down to Georgia” was stuck in my head for the rest of the day.

There have been just a few times that I have experienced complete darkness. This tour was one of those moments. The tour guide told us that places like this cave are one of the few places left on earth where a person can truly experience complete darkness. Then for a few minutes, all the lights in the cave were turned off. Did you know that being in a cave can be one of the darkest places on the planet?

After we ventured through the Craighead Caves and the Lost Sea, we spent some time walking through the self-guided nature trail across from the entrance of the Lost Sea. It was a great place to let the kids walk some more while exploring the forest area of the Southern Appalachian Mountains. This was also the perfect outdoor lunch stop. At the entrance to the nature trail, there are picnic areas, a general store, ice cream parlor, gemming, blacksmith shop, glassblower, café, and a real barbeque pit. Some shops are only open seasonally.

Spend The Night in The Cave

In the future, when my boys are older, I’d love to go back to the Lost Sea and partake in the Overnight Underground Camping Trip and Wild Cave Tour.

For this tour and trip, one must plan on crawling, getting dirty, dress warmly for the 58F temp, and being extremely brave, exploring to possibly sleep in a dark primitive cave with only a sleeping bag, but also rewarded with a deeper look into anthodites and this fascinating historical cave as well as a possible bucket list check-off.

This post was originally published on my blog in 2018. My Unexpected Discovery, USA, The Lost Sea
Vist the Lost Sea, 140 Lost Sea Road, Sweetwater, TN 37874

The 3 Forgotten Verses to The National Anthem USA

14 thoughts on “My Unexpected Discovery, USA, The Lost Sea”