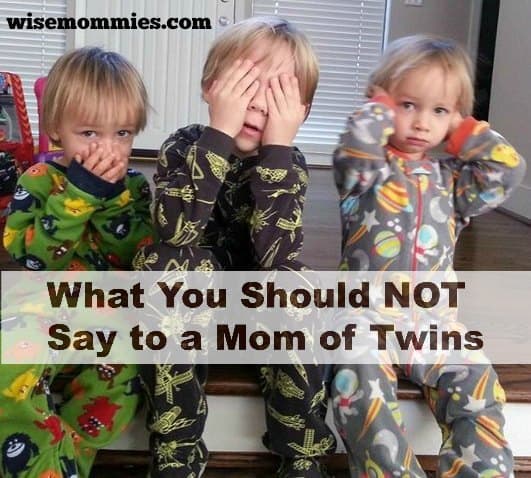 With the pregnancy and birth of my first child, unintentionally deprecating comments from strangers or family members directed against me didn’t really bother me. I’m a pretty go-with-the-flow sort of person and when strangers make remarks I usually classify their comments into two categories,
#1 They mean well and were trying to be nice and may or may not have a core of insight to be clarified further or #2 They are either uninformed or just half-crazy and it is best to make haste away from them.
Then I had twins and comments from the start of my pregnancy to present really do get under my skin at times; I generally find myself with less patience for the comments during my tougher twin road.

So here is my venting list of what moms of twins and multiples just don’t want to hear; What you should NOT say to a mom of twins.

1) “Having twins is just like having Irish twins or two kids close in age.” This is one of the worst comments ever. I would never tell a mom of triplets that I had three boys two and under at one point so that is pretty much the same as having had triplets. Only having twins is like having twins!

Seriously, my twins weren’t even 6 months old and I started getting “which one” questions. When I would look at people with shock, because that is pretty much the only response I could maneuver from such a comment, they would usually go on to explain “you know there is always one twin who is the bad one.” Ok, first all, I don’t call my children bad and evil, pretty and ugly, smart and dumb. My children can make bad or good choices but I’m raising them to have empathy for others and be good and loving people. This also makes them pretty on the inside and a pretty person on the inside is pretty on the outside and so on…..Seriously though 6 months old and you are trying to label one of my twins as good vs evil. Creepy!I can only imagine what will come later for the “which one” questions. I just wonder and worry how such comments will affect my children and find myself wanting to cover their ears for them. Yes, yes, I understand that the person asking is only asking me subtle trends of their personality that I have picked up on, that help differentiate them, but I think the art of subtlety in such questioning is warranted and not too much to ask.

3) “I know several moms who did it and never needed help”, “I know of a mom in your situation and she did just fine.”

Hmmmmph, you don’t know that mom’s situation compared to mine, and in an attempt to encourage me through some indirect means, you end up unintentionally diminishing what feels to me to be a herculean effort. When people made these comments to me before my twins were even born, I felt so intimidated to be fine, make it work, and not complain. I’ve learned since that I should have humbled myself and asked for more help because I wasn’t fine and ok. Especially in the beginning it is just really hard with twins and I can’t even begin to imagine with triplets or more….Later, I learned most of these comments were from moms whose husbands weren’t traveling all the time and even had a husband available for weeks at home to help; had family available to help; two demure little girls; or the age difference in the older child was significantly more or they had kids close in age.

I’m not sure about this question. Are people wondering if I really know my children or question if they will have an identity crises from never being known by their own mom? Or should I start giving answers appropriate to the “which one”questions? Oh this one is fatter, dumber, prettier, shorter….I think maybe they are asking me for a little cheat sheet so they can tell them apart…I’ve thought about making numerous little photocopy schematics of them for my purse, one of the hollowed, cold little toddler diagrams having a labeled freckle on the named form and calmly handing it to the questioner so they can feel a hint of the awkwardness too.

5) “I can’t believe you are pregnant with twins, you are so small.”I was not at all small and had very large babies, but when I was 30 weeks pregnant I had another mom also 30 weeks pregnant make this comment to me, followed by, “I’m like twice your size and I am only carrying one.” I wanted to cry when I heard this statement. Every mom wants to know that her babies are a healthy weight and comments as to questioning how tiny a baby is growing in a womb can only worry a mother. Why do that?

6) “Do they have their own language?” This question is ok if asked at the right time. Asking me if my 8 month old twins have their own language? Yes, they are geniuses speaking fluently to one another at 8 months of age in a sub-dialect of Klingon even though they only started eating solid food and sitting up by themselves two months ago. I think the curious questioner is usually asking me if they have their own language because they have read or seen something ambiguous about that somewhere.I get that, and will try to answer them as best I can, but I find myself having to interpret their question and assume things, and it’s a very common question, sometimes with different implied meanings.

7) “Well I heard it’s easier with twins than with one later.” Or “Twins are so much easier because they have a built-in playmate.”

This comment was THE WORST comment for me having been said by both a family member and a close friend. If they get easier later, great, but that first year or two is really really hard with twins and just acknowledging that would be nice but the above comment translates to, “well suck it up because you may have it harder than me now but you’ll have it easier later so I don’t care what you are going through.”

This sort of thing also plays psychological havoc on the twin mom. Another twin mom expressed the same fear I had when family/a close friend threw out this sentence: that perhaps these individuals had only singletons and as an expression of subtle or unrealized jealousy implied that their maternal job was comparably hard since they didn’t have a “helper” twin to distract their child. And that odd feeling feels very sour coming from close ones. It’s crazy, I know but it turns out it’s common twin-mom craziness—please don’t make us feel crazy.

Further list of annoying comments that I’ve heard other twin moms mention:
“Are they twins?”; “Better you than me”; “You’ve got your hands full”;”Do twins run in your family?”;”Are they natural?”;”I hope you have help”; “Did you plan on having twins?”;”Are they identical (when they are boy/girl twins)?”

Look having twins and multiples is hard. Like with other moms, just having some kind words, words of empathy,or just simple acknowledgement would be nice. I think in general, most people are trying to just show acknowledgement with the phrase, “looks like you have your hands full” which is why that comment has never bothered me. I mean, don’t get me wrong, before having had twins, I was totally naïve. Even having had friends with twins, I didn’t make ridiculous comments like above because I still knew I hadn’t a clue.

Whenever in doubt,here are some comments to make to moms of multiples.
1) Twins, wow what fun you must have!
2) Instead of “how do you tell them apart” ask “so who is who?”, or “I can’t tell them apart” or even “Have their individual personalities started to shine through?”
3) Your children are adorable!
4) Instead of “twins, double trouble” say “oh twins, double the blessings.” “Double the fun.” To me trouble can be fun and being blessed is fun so that covers it all but in a positive way!
5) Those are the cutest babies ever!
6) Twins, what a gift!
7) Twins, wow, I can’t even begin to imagine! This is usually what I had said to moms of multiples because before having had twins, I couldn’t even begin to imagine, and was always in awe of moms with twins.

Every Tuesday we publish a post from moms of Multiples for the TwinZone Tuesdays. Are you a mom of multiples? Are you in the TwinZone? We would love to connect and hear from you!

When does Life Get Easier with Twins?

23 Reasons Why Having Twins is Double the Greatness

5 Riddles and Puzzles about Twins

How to Tell if You are a Good Mom