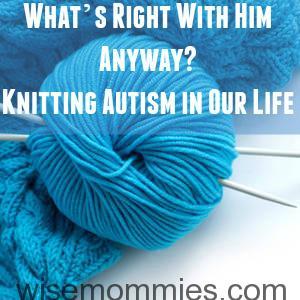 Our guest blogger, Natasha, has shared a very powerful message that we believe will be bring peace and support to many fellow moms for World Autism Day, today, April 2, 2019 for Austim Awareness. This post, What’s Right With Him Anyway?: Knitting Autism in Our Life, was first published & posted on April 2, 2016.

Jack spoke in complete sentences with a large vocabulary by age two. “He’s so bright,” marveled a social worker who led our group for parents of difficult toddlers. “He’s so bright,” exclaimed neighbors, moms, and strangers, which was little consolation for Jack’s tantrums, aggression, and seemingly selfish behavior that had already forged a trail of tears and woe through our home. “What’s wrong with him?”

I asked a slew of experts. The answers varied: ”ADHD. Anxiety. OCD. ODD. Needs more structure. Needs a spanking”. With time, educators grew exhausted. Kids kept their distance. Friends faded away, as did hearing “He’s so bright.” What was WRONG?

My Ph.D. in clinical psychology didn’t cue me to the high functioning autism in my own child. Such is the autism puzzle with its myriad of manifestations, ranging from nonverbal to highly verbal and obviously odd to a wee awkward, with social deficits being a common thread. As all children have social lapses, diagnosis can be difficult until the peer group matures, revealing deficits by comparison.

In Jack’s case, he was verbal and wanted friends, qualities I had deemed incompatible with autism. However, for him, a friend was someone on whom to dump vats of shark facts and soccer stats; a non-reciprocal, one-sided sounding board. Other symptoms like mental inflexibility and difficulty taking others’ perspective preceded tantrums, anxiety, and aggression so intense we started to lose hope.

It took two years to access an evaluation and an autism spectrum diagnosis, but we now have assembled an impressive Team Jack to attack his deficits. The most hopeful support came from a psychologist who refreshingly asked what was right with Jack. “What about his strengths,” he inquired. I long ago forgot about those, so in a half-hearted, Eeyore-like tone, I mentioned his high verbal IQ. With Tiggerish enthusiasm he countered, “He is bright!” I wanted to cry at the obvious gap between his optimism and my ambivalence. “Yes, he is bright,” I finally believed. He probed, “What is he good at?” “He loves sports,” I said, suddenly very interested in where this was going. He was sincerely encouraged, and I was infectiously bolstered, and so began a very positive conversation about Jack’s strengths and passions.

The autism diagnosis has been positive for our family, eliciting understanding and compassion. Moving forward required a mental shift from “disorder” to order, as in ordering strengths above weaknesses. Wouldn’t we do that for any child? What if I had spent the past ten years marketing Jack as “gifted with some behavioral quirks” instead of “behaviorally bonkers with a large vocabulary”? His deficits would not have defined him!

Autism is a spectrum disorder, and people on the autism spectrum, like anyone, can be very nice or a little mean; too chatty or too quiet and everything in between just as non-autistic people can be inflexible, prone toward tantrums, and even painfully shy, stereotypically autistic traits. It can be difficult to discern where normal ends and disorder begins. As autism is a disorder of degrees, and we all carry aspects of it in our own personalities, shouldn’t the people who wear this label be accepted as merely more intense than you or me? Shouldn’t we have empathy for those with whom we have at least some similarities? For our family, this is how healing began.

God knit Jack together exactly as he was meant to be…

”For you formed my inward parts; you knitted me together in my mother’s womb. I praise you, for I am fearfully and wonderfully made” (Psalm 139, 13-15).

My Mom job is to admire God’s beautiful handiwork as He wove Jack, not as an overwhelming mass of messy strings deposited in my lap to clip and burdensomely disentangle. If I follow the seemingly irregular individual strands as they loop in and out and around again, I can see where it is all going. If I get perspective, I can see Jack’s gorgeously crafted garment in its magnificent entirety, made perfectly for him!

While the world might require me to alter Jack a bit for a better fit, he does not need to be completely remade. Children with autism are as varied as children without, and all kids have their unique interwoven strands of success and stumbles, and how absolutely wonderfully made are they! Each is already knitted for a certain purpose, so parents simply need to tailor them for their best fit.

So, as a wise refrigerator magnet once told me, “Keep Calm and Carry Yarn.” Doing so just might keep our spectrum kids and us from completely unraveling. From friends and family, we could also use gifts of prayer, patience, compassion and wine (and in my case, Red Vines).

When does Life Get Easier with Twins?

Memorable Moments in Life; What are Yours?

3 thoughts on “What’s Right With Him Anyway?: Knitting Autism in Our Life”