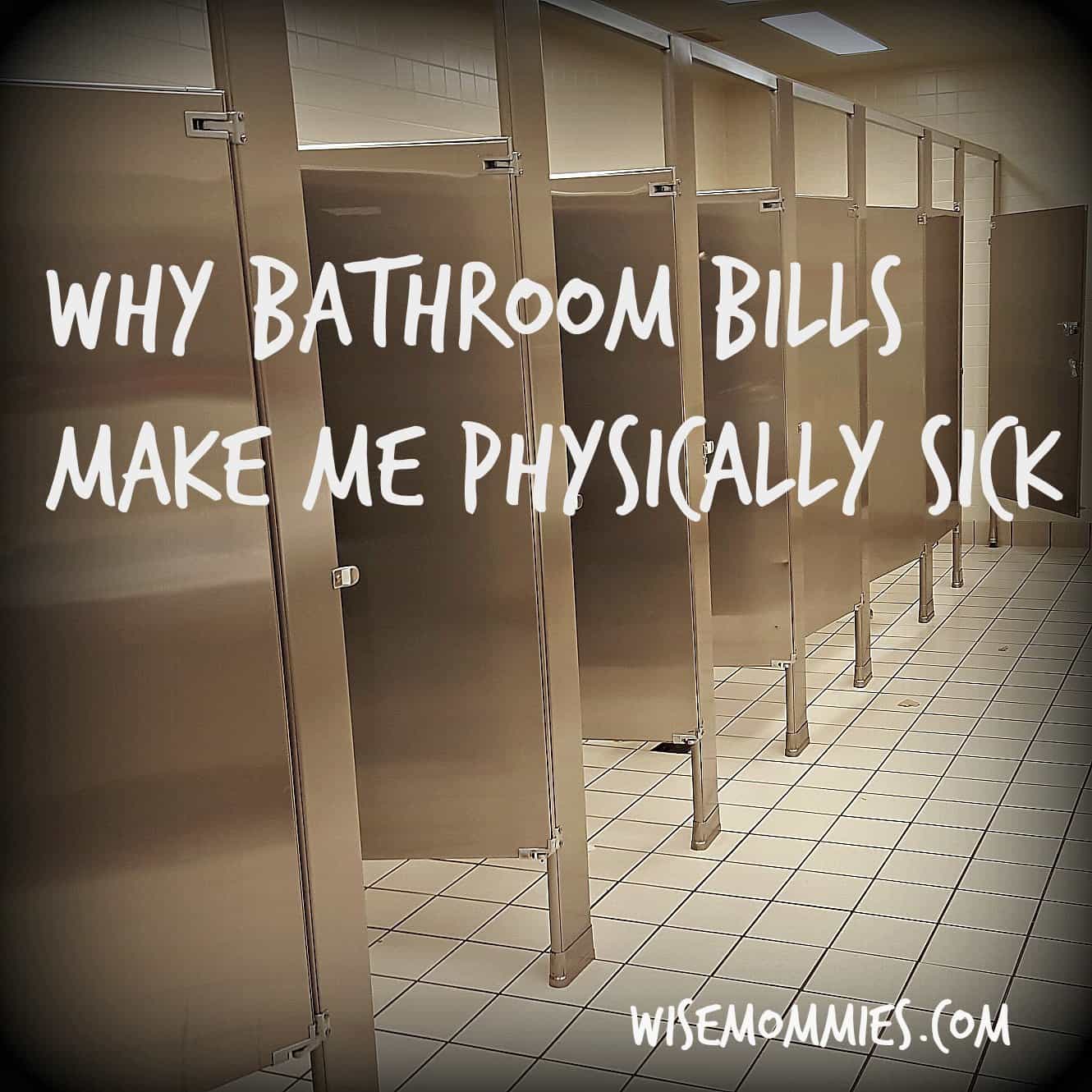 When it comes to political stances or opinions I have always remained quiet. However, I feel extremely convicted to speak up regarding bathroom ordinances being discussed, passed and supported because they are sickening me! I am a Christian, yes, but that is not why I am speaking up in this post against the Target policy and other bathroom ordinances and bills that start to make an impact.

From what I understand of this bathroom ordinance (if you already understand this please feel free to skim or just skip below to why this ordinance sickens me):
On March 23, Gov. Pat McCrory, NC, signed the proposed House Bill 2 (HB2), aka Bathroom Bill or North Carolina Bathroom Bill, passing into law, in NC, transgender individuals must use the bathroom or fitting room of their sex at birth, not what matches their current subjective identity. That means even a born-woman who has transitioned to be a man and looks like a man must use the woman’s bathroom and fitting room.

Then Target sets its own ordinance: “its transgender employees and customers are “welcome” to use the bathroom or fitting room facility that best aligns with their gender identity.” So Target’s ordinance goes against the NC law in that it doesn’t matter what the birth certificate says, a transgender individual, can decide for themselves which bathroom they feel most comfortable and or safe using.

Target is the second largest discount retailer in the nation; why can’t they install unisex bathrooms and fitting rooms? I believe some Targets already have family bathrooms and fitting rooms so why not unisex rooms. I greatly appreciate the Family Bathroom and Nursing rooms that have given me privacy alone with my children. I have no problem with transgender individuals or any individual having a private place where they can feel comfortable.

People may say that sexual predators are not going to go out of their way to take advantage of this ordinance and allowance. I disagree!! Serial rapist and sexual predators usually start small and see what they can get away with. Bathroom attacks are real. Having unisex bathrooms protects all women, men, children, and transgender individuals from any confusion of who is a transgender and who is a sexual predator while also giving clear, respectful and safe boundaries to every single person existing, and trying to exist without being disturbed in restrooms.

Why the Bathroom Bill rocks my body with paralyzing fear, making me physically sick:
December of 2003, I WAS ATTACKED and ASSAULTED in a woman’s bathroom. It happens a lot more than people know or realize, most attacks never being reported. The man that attacked me was later caught after raping a woman whom he also attacked and beat on another college campus. I was not his first attempt nor his last, this person eventually being successful.
For years, I could not use public restrooms because of this horrific attack on me. Even twelve years later, I still get intermittent anxiety in bathrooms. When I tell people how hard it is potty training twins, they have no idea….children that are potty training sometimes need to be in a restroom for a really long time. So when out in public it becomes truly stressful for me to stay so long in a public restroom.

Being Attacked has Left an Indelible Mark:
It was late, during evening classes, on a college campus in Dallas, TX, during finals so not a lot of people were still around.

I was sitting on the commode, my skirt around my ankles, my empty restroom then echoing the sound of cautious heavy footing, the hair on the back of my neck standing up, knowing immediately that the shoes, quickness and heaviness of the walking were masculine, not of a woman. And they had a sense of intent. With all the stalls unoccupied, except mine, the stall door right next to mine was opened and someone entered. Quiet again! I felt it! This whole incident unfolded rapidly.
My gut told me….then movement again in the stall next to me. I leaned over partly to glance under the stall, looking for shoes to assure me it was a woman because already my gut was telling me otherwise. Then I saw boots that were definitively men’s boots facing the toilet, then legs and jeans that were all manlike. I’m rapidly taking toilet paper at the same time to finish up my business and get out of the bathroom but then suddenly there looking at me, the face of a man leering at me with his hand grabbing at my ankle and yanking me off the toilet faster than I could yell “no.” This feeling and attack will forever haunt me.
After several minutes of trying to fight off my attacker, another woman entered the bathroom yelling out “what’s going on in here.” I was very lucky! If not for this woman coming in, who fortunately stopped my attack before I could actually be fully assaulted,… My attacker fled but not before saying, “my girlfriend and I were just fighting.” So the whole time he was attacking, and after attacking, he was calm, in control and had ideas of what to say if caught. Every time I hear of a man that “accidentally” was found in a woman’s restroom I feel sick…..This bathroom bill, ordinance and allowance from NC and Target and other places will seriously affect many women who have been raped and attacked in their life and especially those attacked in bathrooms.

Even writing this story, which I’ve wanted to speak about for years, has me biting my fingers, anxiety felt in my legs and my teary eyes. I still fear things, being attacked again like this; other women being attacked; and now being attacked by insensitive, apathetic people at my words finally spoken.

I also fear:
Because of what happened to me, if I’m in a restroom in Target and an individual that clearly looks like a man nonchalantly comes in to the restroom. I’m going to internally or externally freak out. So do I not do this now for fear of being intolerant or discriminating? I’ll never again be able to report a man being in a woman’s restroom, so these men that are sexual predators of subtle or potential aggressive nature that want to see how far they can go and or get away with in a woman’s restroom will say I’m discriminating against them, that they are transgender? It’s already happened to the mom below at an REI store:

REI incident
On August 24, 2015, a mom was upset upon learning that a man had come into the store restroom while her 12 yr old daughter and 10 yr old friend were using the restroom. When the mom notified management, concerned over the safety of her daughter, the store manager asked her to leave the store after stating “they do not decide who people are or what they can do” and “obscenities were hurled by other patrons at her family.” The mother’s concerns were “interpreted as being anti-LGBT.” What a wonderful lesson for the teenage daughters, when you try to speak up about an incident that you might be uncomfortable with, just make sure you are also politically correct and don’t discriminate… so maybe just don’t say anything until it’s too late. I can’t help but wonder how this is not a psychological reverse-discrimination.

There are reported cases but more overlooked incidences:
Serial Rapist in Dallas,Tx who first attacked in Target Bathrooms:
In 2012, the community of Lake Highlands, Dallas, TX, had women fearful regarding a serial rapist brutally attacking and raping women in their homes. When caught, they discovered that the rapist’s first forays were in bathrooms and specifically in Target and Kohl’s….his bathroom peeping incidents and reports are what helped lead to his identification and arrest, ending his serial rapes……

Why Bathroom Bills Make Me Physically Sick; Why Target’s Policy Sickens Me Personally and as a Parent; Why the Bathroom Bill for Transgenders makes me Sick….all the bathroom ordinances
My attack was real and happens more than what is publically made aware. Women are already afraid to speak up about being attacked why make it harder and more confusing? Yes, attacks will continue to happen with or without a bathroom bill or Target ordinance, but now these changes allow for more wolves in sheep’s clothing and will suppress more people who feel something in their gut to have a defensive reaction that might prevent an assault or from speaking up for fear of being labeled or thought of as being anti-LGBT…all at the risk of safety.

Best Tip to Make Shopping with Kids Easier and Enjoyable

Live Nativity Scenes in Dallas for 2015